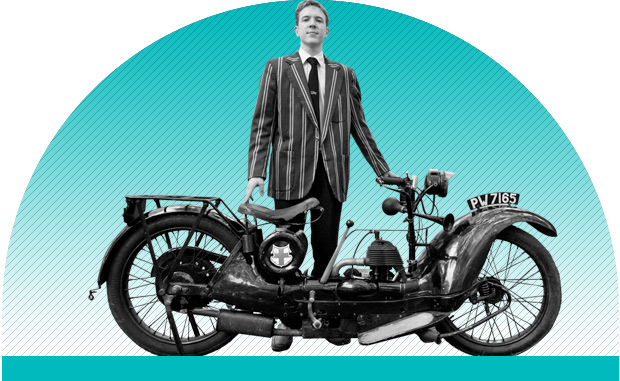 Derrick is a classic Ner-a-Car motorcycle, built in 1926, the last year of
its production and he is the ‘little brother’ to Bo’.

Derrick is the result of a sultry affair – or at least commercial union – of British and American ingenuity in 1926.

Our Derrick was produced in Kingston-upon-Thames, one of just 6,500 built by Sheffield-Simplex car manufacturer. Sheffield-Simplex licensed a name and designs from the American Near-a-Car Corporation. All production moved to the UK from 1919–26.

Derrick is powered by a 350 cc Blackburne side valve engine driving through a Sturmey-Archer three speed gearbox. True to his English roots, Derrick’s Sturmey-Archer gearbox was manufactured in Nottingham.

Reported The Clarion at the time: “In the model ‘C, Ner-a-Car, the Sheffield Simplex Company have produced something which will give all the speed a sane man can desire, plus the riding comfort and safety which make the Ner-a-Car famous. The new Blackburne engined Ner-a-Car is probably the finest example of two wheeled comfort in the world.”.

The motorbike was marketed to the upper classes. Riders included the Earl of Haddington, the Earl Fitzwilliam, the Earl of Bective and the Duchess of Marlborough.

What happened to Derrick between the time of his birth, er, manufacture, and his eventual acquisition by the Union in 1980 is left largely to the mysterious pages of history…

We do know, however, that he was a gracious gift of a (now retired) Aeronautics teaching professor, Roger Serpell, who was also Head of the Imperial College Red Cross Service. Roger had intended to restore Derrick but never found the time, so he gave Derrick to Guilds.

“GUILDS finally got a round to naming Ner-a-Car at the Freshers’ UGM on Tuesday. It was decided that the name chose had to compliment ‘Bo’. Suggestions ranged from the purile (‘peep’ and ‘geste’) to the brilliant (‘LLOCKS’). In the end it came down to a chioce of the two, the already mentioned ‘LLOCKS’ and ‘Derrick’ After a show of hands and a count ‘Derrick’ was declared the winner and the name is now official.”

Yes, that also meant the mascot duo would be referred to as ‘Bo Derrick’, in homage to popular Hollywood star Bo Derek. (Ha!)

Derrick remains in good health and makes frequent outings in Kensington thanks to maintenance by a group of volunteers. Derrick may be old but in some ways ahead is remains part of new trends in motorcycle design. Derrick is a very early example of a ‘feet forward’ motorcycle. This is a class of motorcycles ridden with the feet forward, as in a car, instead of below or astride. This class of vehicle differs from a scooter and designs are still evolving to give riders the performance and handling of a motorcycle with the comfort of a car as a transportation alternative.

Reports Mat about the experience:

“Derrick is extremely reliable and virtually maintenance free, when compared with Bo’. In fact, I only realised I actually was supposed to give it some pre-run service on the day before Brighton, which involved hardly anything else than topping up the fluids and greasing the wheel hubs — not at all bad for an almost century-old vehicle!

This odd-looking thing gathering dust between the lathe and the engine hoist in the corner of the garage caught my attention as soon as I joined the Club in 2010, mostly due to the three factors: the forward-foot sitting position, the readily visible valve pushrods and the absolutely archetypical sound the 350cc Blackbourne engine makes (you can tell I’m an engineer!). Ah, and the idiosyncratic looks…

The day of the run was crazy. Apart from Derrick, Bo’ was also supposed to be accompanied by another Imperial mascot, the 1916 fire engine called Jezebel. As the cruising speed of Jez is somewhat closer to that of Derrick, we have decided that the motorbike should more or less follow Jez, which is the usual practice. It’s just that Derrick doesn’t seem extremely happy at the medium second/low third gear, and also feels a bit unstable even at Bo’s top speed, which is somewhere around 28mph – speed testing to be performed in the near future!

And so there I was, right outside the Jez garage, well before the dawn. I’ve put the Derrick coat on top of my usual motorcycling clothes, which turned out to be quite an involving task that took some trial and error during the run in spite of the advice given to me by some of the older Jez people who remembered the times when such outfits were in regular use. I learned about the suit on the day, not before — I saw it in the garage before, but never figured out its actual use.

Never in my life had I experienced any problems with starting Derrick – apart from that one morning. Bo’ had already left for the Hyde Park, and Jez and I were supposed to wave him off after the official start and then make our way to Brighton in our own time, adjusting our route according to our needs and abilities. I had the engine running just before Jez got ready to go, yet I’ve somehow managed to get the engine flooded the moment she set off. Oh well, a typical bump starting procedure solved all the issues – this thing is older than my Grandma after all.

The ride to Hyde Park was short and filled with engine stalls, missing Jez at traffic lights and watching all the odd-looking vehicles around. We left Jez and Derrick outside the park, as for obvious reasons only the vehicles actually participating in the Brighton run were allowed in. After Bo’ set off, I got lost as I walked back towards Derrick. I saw Jez waiting for me on the other side of the road, but as I knew it would take me some time to actually get going, I just texted them with an instruction not to wait for me, and took my time getting back to the motorbike. From now on I went on my own. Oh well, improvising is my thing after all…

The actual run wasn’t as scary as I initially thought. I was riding at my own speed, the entire navigation based on the file of more-than-hundred-year-old vehicles, appreciating the variety of the motor cars before a standard, well-proven, optimised and somewhat boring set of automotive solutions has been established. I caught up with Bo’ at some point, which was an extremely pleasant experience, before shooting off in search for Jez (which I didn’t manage to see during the entire run). In the meantime I have managed to find and pick up a massive brass gear broken in half (goodness knows what happened to the poor vehicle that once utilised it – we’ve given it to the organisers as someone will be missing it!) skid a bit – quite an achievement in Derrick, who despite having two rear brakes isn’t terribly easy to stop, and finally experienced the horrors of his top speed, estimated at some 55mph on the final stretch of A23. After getting to Brighton an hour before Bo’ and spending all that time constantly getting lost and figuring my way towards the shore, we’ve loaded Bo’ on his trailer, stacked Derrick in the back of the Land Rover towing it, and made our way towards the pier with intentions of getting on with the Brighton tradition by having a few well-earned pints.”

Never, and you’d be a fool to try!

Derrick is said to be the favourite mascot of couples comprised of one Brit and one Yank.

Derrick rides along with Bo’ on the annual Brighton run.

Less than a dozen Ner-a-Cars are believed to exist in the UK today. Four are model C, and only one of these four (Derrick) is running.

Is Derrick your favourite Imperial vintage vehicle? Share your comments below