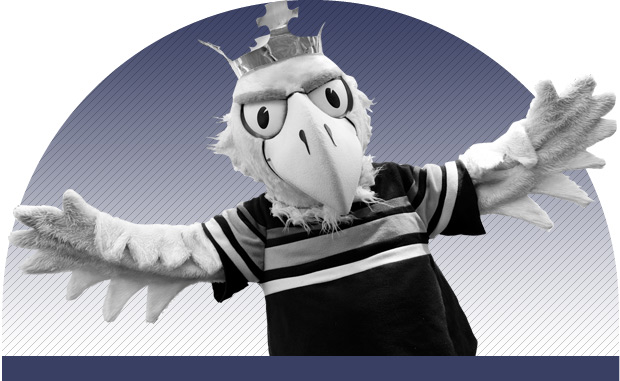 Medics rushed to the scene when, in 2009, a new mascot was born. Was it the mascot’s unusual lineage? Natural fighting instincts? The debate continues, but one thing’s certain: don’t call Phoenix a ‘chicken’ because only the strongest are known to survive. An unlikely, chicken-looking — nay, Phoenix-looking! — mascot borne of three parents.

Phoenix is a yellow-costumed suit. Not just anyone can wear Phoenix’s feathers. The honour is bestowed by secret society to the student nominated as ‘most daring’, and hence, known to have the greatest ability to instill stone-cold fear (or jolly good fun) in opponents. Phoenix is the mascot of the Medics Union.

Some say Phoenix first arose to dominance in 2009 — but they are wrong.

The Phoenix began drawing power for his rebirth in 1988, back when St Mary’s Hospital Medical School merged with Imperial. At that moment there was an undisputed spark of lasting, heated competition. Could you expect anything less when two formerly opposing rugby teams merged?

By 1997 the flames grew hotter as Charing Cross and Westminster Medical School (another competitor!) merged with Imperial and the Imperial College School of Medicine was formed in 1997 (later becoming the part of the Faculty of Medicine responsible for undergraduate medical teaching).

Rugby: just the beginning. Now Phoenix attends all the sports games. Yes, both the sports matches during the day and J.P.R. Williams match in the evening.

The design of chicken suit, er, Phoenix suit was based on the original ICSM logo. The design incorporates a blue St Mary’s fleur de lis on the right hand and right foot of the Phoenix and the red Charing Cross on the left hand and left foot of the mascot.

Who is the person behind the suit? The person tasked with invoking the Phoenix deity of competition? The person encouraging the players and entertaining the crowd at the matches?

Some guess it is a random medical student pulled from Reynolds Bar at Charing Cross Campus. Not a bad guess. After all, the featured mascot’s everyday nest is nearby.

But wrong. In fact, the honour goes to a student nominated by the ‘Secret Nine’.

The Secret Nine is an invitation-only club with nothing more than an espionage-sounding name and access to the Phoenix suit. At the start of the academic year the Nine meet at an undisclosed location said to be “nine paces east of the heart, nine steps south of the mind, and nine turns from three”, a three-pronged riddle as yet unraveled by intrepid reporters at Felix.

From this series of meetings the Nine nominate a current student who possesses ‘most daring’ credentials and, in the words of Anil Sunny Chopra, Past President of the Imperial College School of Medicine Students Union, and rumoured member of Nine, is ‘up for it’.

Phoenix isn’t shy about a fight, either. This year Phoenix was tackled by a group of Imperial College boys as he heckled a losing rugby team… and yes, he’ll do it again.

Phoenix’s head was stolen in 2011 with a ransom demand that included a £200 donation to RCSU RAG, the ICSM President streaking in Beit Quad with only the Phoenix head on and a Medicine-wide email stating that “RCSU is better than ICSMSU”.

Not lately as far as we know.

Phoenix struts his stuff by dancing on the sidelines at sports matches. Have you tangoed with him? Comment below.