I celebrated my birthday on Sunday with a bunch of friends over an awesome Turkish dinner. It was a semi-surprise party organised by a friend who – I learnt that night – had originally set out to plan a surprise event …but then must have somehow forgotten when he sent me a facebook message to tell me about what he was doing. I guess once he realized what had happened, he decided that the guest invited would simply remain a secret ….along with the location of the dinner. With him claiming to know exactly who all of my friends were, I was quite eager to see who’d turn up at the party! 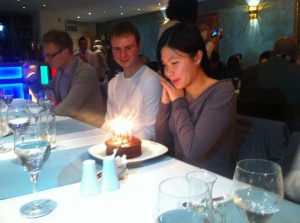 An hour before the dinner, I realized that I still had no idea where to go …and was starting to question whether the plan ever included me! My friend, though super sweet , is always on a mission to sort of get back at me because of how often I tease him….so I couldn’t put leaving me out of my own party past him! Everything’s a possibility when you’re at war!

Fortunately for me, my friend has a sidekick that I like to call his Batman because she’s amazing at keeping him on his toes…and he’s definitely Robin (secretly adoring his green tights). Batman is always the key. You threaten to take away Batman – Robin folds and you get your way. Simple mathematics. Haha. Well I got the address within minutes after firing off a quick text to my friend’s action hero, while a message to my friend himself received this answer: “I should be able to give you an address soon”.  …Soon?! I’m guessing soon equalled the time it would take him to send off a message to his friend to ask for the address!! Haha 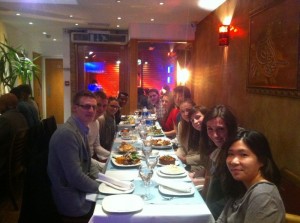 Dinner was at the Great Mangal out on Fulham Street near Fulham Broadway station. The food was really really good!! I would totally recommend the place to anyone looking for a great Turkish meal…or in need of some good grub before a Chelsea game (Stadium is minutes away). I had a really fun night with …a lot of people I didn’t expect, to be honest!…while my closer friends all ended up unable to stay for dinner. This made it a great evening to catch up with friends from class while at the same time getting to know some of my new team mates’ partners better. Overall, it was the perfect way to celebrate my first and probably only birthday in London, away from all of my family and friends from home (I think one of the coolest things about going to school with a bunch of other international students is that we’re always around to support each other through celebration and hassle).

Now because most of my friends and family live in different parts of the world, the day after my birthday…so the 28th… is a day when I generally expect to continue to receive messages and phone calls. Yesterday, however, was a first for me to get a second birthday dinner and another cake! Two of my friends had decided to cook me an amazing Thai meal, something I thought was especially sweet because they hardly ever cook and have actually been eating out every day since the start of this year because they’ve been much too lazy to cook for themselves. I was very very surprised! This time, as it was only the three of us, I definitely had a good share of the cake (I had a tenth of one the night before!). Under my friend’s orders, we ate the whole cake with a spoon without bothering to cut it into slices. Amazing!! It was a strawberry cream tart with huge amounts of fresh strawberries (one of my favourite fruits!!) on top that they had picked up at Harrods. Something else that I would recommend!! 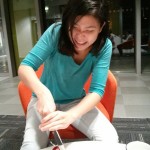 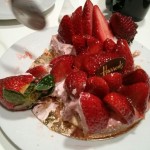 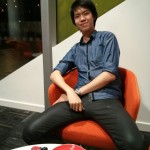 I’m sitting in my room right now and I think it’s safe to say that today’s going to be a normal day – finally….though I wouldn’t protest if someone offered me a third cake! January 2013, I will miss you!