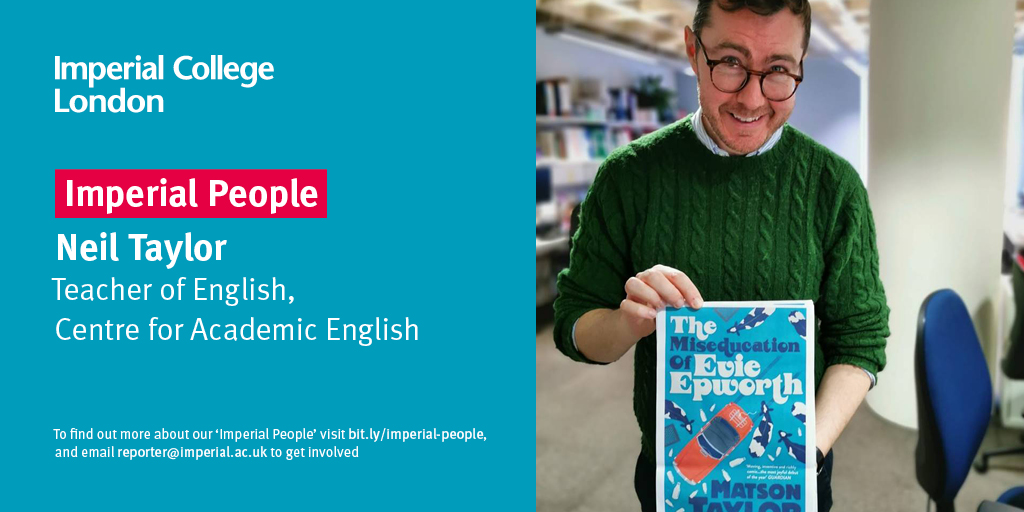 “We needed our online classes to allow us to help academically but also to be a supportive, social space.”

I work part-time at Imperial as an Academic English Teacher in the Centre for Academic English where I support students and staff with the written and spoken communication of their research. Alongside this I teach part-time for the Victoria and Albert Museum. On July 14 I published my first novel The Miseducation of Evie Epworth, fulfilling my long-standing goal of publishing a book.

I wanted to write a coming of age novel, not just of a person but of a decade. Evie Epworth is 16 in 1962 and she stands on the precipice of womanhood just as the 60s, as we understand them, are about to begin. For Evie this is a period of change and uncertainty and there’s that inevitable tension between childhood and adulthood. At times she seems endlessly knowledgeable and mature, at others she is notably naïve. The girl and the era come of age together.

It was important to me that the book was funny but also touching. I didn’t want to shy away from important and topical issues. My favourite writers are authors who can say something meaningful but also make you laugh. I knew that I wanted to set the story in Yorkshire and I also knew I wanted to move away from the stereotype of ‘the North’ as backwards or illiberal. Evie is unconcernedly accepting of her friend Caroline, a lesbian from London. A comment on both the arrival of the 60s and how London doesn’t, and didn’t, have the monopoly on acceptance.

I’m no stranger to writing – academic writing is crucial to my jobs – but writing fiction is very different. I would come home from work in the evenings and disappear into this 1960s Yorkshire village. There’s a freedom that comes with being able (in fact encouraged!) to make it up. In the end though, the book needed a lot of historical research. The period in which it is set is central to the book, so I needed to be sure it was accurate.

Balancing the three jobs over the last few months has been quite hard. I’ve had a lot of work at Imperial as we respond to the challenges brought about by COVID-19. We’ve moved our courses online and worked hard to make them as interactive as possible. I’ve felt very sympathetic towards a lot of the PhD students I work with.

Before I joined Imperial, I thought science was all laboratories and white coats, but I’ve since realised that for a lot of students their work is sitting in front of a computer coding. That’s isolating enough when you’re in London and surrounded by friends, but worse now everyone is scattered all over the globe. We needed our online classes to allow us to help academically but also to be a supportive, social space.

I’ve got a really amazing manager and team around me who’ve made the last few weeks as I’ve moved towards publication possible. We’re our own little family! I’ve missed them massively, but we’ve managed to recreate coffee breaks and ‘water cooler moments’ virtually. They’ve been a huge support to me and I’m incredibly grateful for all their help.