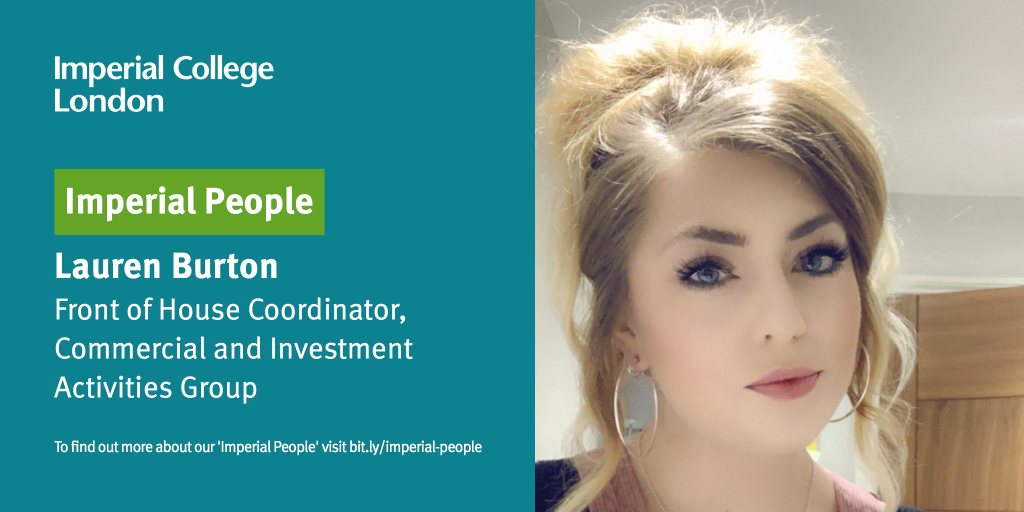 “A building can only run as smoothly as its staff, and thankfully hard work is recognised in my position.”

I was lucky enough to join Imperial not long after finishing College. In the 11 years since I’ve been here, I’ve worked in pretty much all the buildings across South Ken, Hammersmith and White City.

I’ve been the Front of House Co-ordinator for the I-HUB for the past six years. I do a little bit of everything for the building and its members. Visitors, members and guests are my main priority, but you can also catch me patching internet and phone lines or giving a tour to prospective tenants.

Time flies on an ever-evolving construction site…I can’t believe how much the White City Campus has changed since we opened in 2016 and aside from the noise, roadworks and diversions we’ve endured, it’s turned out to be quite a nice place to come to work! Having Westfield down the road though is dangerous after pay day.

A building can only run as smoothly as its staff, and thankfully hard work is recognised in my position. Being the only original staff member remaining since opening (maybe it’s me..?) I tend to get a lot of thanks for helping the newbies settle in. It’s a lovely feeling to be appreciated!

I’d like to work my way up to a more senior position or role with more responsibility, which I’ve already had some help with – shout out to Michael St Clair Laing, the best boss I’ve ever had, who pushed (and still pushes) me to go for bigger and better things I’m capable of, even when I don’t feel it!. The only way is up in an ideal world and I’m trying to get there.

When I’m not working, I do the usual social stuff, but I do like watching films. New, old, classics, anything to fill my mind with useless quotes just in case it comes in handy! As well as being a Marvel fanatic (if you’re not, you should be!), I’m an avid horror film watcher, which usually ends up in disappointment but, you gotta stay positive that the next one will be better!

Lauren worked for the Estates Division at the time this profile was written, she has since moved positions in the College.