Get to know me

In this very first post, I guess it is only appropriate for me to introduce myself. As you’ve probably already figured out, I’m Traci – female Traci like Tracy Chapman and not Tracy Morgan or Dick Tracy. 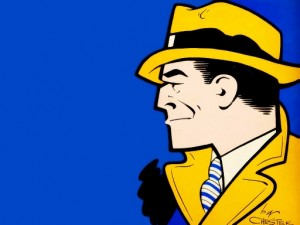 Though clarification at times can be necessary when you’re called Traci and you apparently sound like your brother, the great thing about having a unisex name is that you can get that brother to pay your bills, answer surveys, and do your banking all by phone for you with very little questions asked. Coming from a country where privacy laws make it nearly impossible for anyone other than yourself to set up your phone or internet connection, it’s such a relief to have the option of being a man some days. Truly.

I am a Canadian student at the Business School pursuing an MSc in Innovation, Entrepreneurship and Management. I’m from the 11th biggest city in Canada @ population 366,151 in 2011 (yes, go ahead and have a laugh), called… *ahem* London. Of course, “London” has been the source of a great deal of confusion – so much so that when I moved to France for school as an undergrad, the visa officer in charge of my application was rather put off by the too little background research I had prepared to “lie” about my place of birth. It took me a half hour and Google (oh what was life like before Google?!) to convince the officer that I understood a few important things which included: 1. I am familiar with the definition of birth. It is when you enter the world; 2. I am aware that Canada is not located in the UK. They are two separate countries; and 3. I do know that it is impossible for any one person to be born on two continents – and at the same time, of course. Once these points were established, a win-win situation was eventually reached when I closed my case with the submission of a few visual aids. 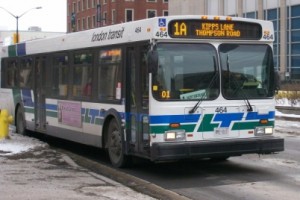 and if you’re less lucky, they look like this: 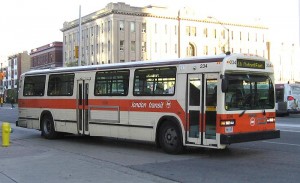 If you see this and it’s moving, it’s a tourism bus

If it’s parked and surrounded by chairs, it’s an ice-cream shop

And these are our taxis. They don’t fit top hats: 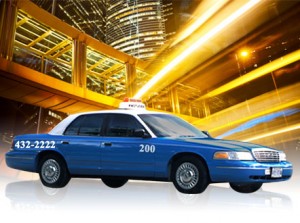 …and of course, London wouldn’t be London without….the Thames!

This is the Thames River in my London. It was originally called “Askunessippi” by the Native American and First Nations people, meaning “the antlered river” because the river has 3 branches: 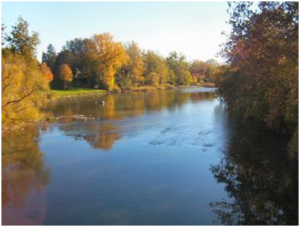 And finally, this is the tallest building in London, Ontario. It’s 113.4m tall and a great mirror: 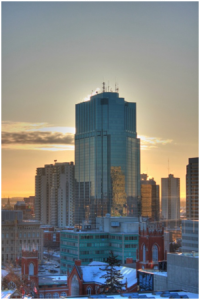 So what about this London?

I arrived in London, UK on the 27th of September. In my first 48 hours, I had a taxi driver give me a massive hug because we had such a good time chatting, the concierge person at my hall carried everything for me to my room, I got free things from everywhere, and two girls walked me to a store I was looking for even though they were heading in the opposite direction, and I was going 20 mins away!

I fell in love with London, this bigger London very quickly.

At one of the orientation events I attended before the start of my course, new students were asked why they had chosen to attend Imperial over other schools. This is what I thought was the most memorable answer: “because there are no humanities!!!”. Unfortunately for Boy X, there is a humanities department and it changed its name to trick people like him (bahaha). It’s called the Centre for Co-Curricular Studies. It’s a really great department that offers evening language courses for all students. It’s especially attractive to the business students since speaking different languages is highly valued by all industries.

Imperial was my first choice. I spent three weeks on my application because I wanted to make sure that I was being honest about myself while also making sure that the school was the right fit for me. The time I spent paid off because a few days into my first week of class I called my parents to say that I should have come to Imperial for my undergrad. What attracted me to this university was not only its reputation, but the types of people I believed it attracted: people curious about the world, unapologetic about wanting to learn, and finally nerdy enough to be accepting of all kinds of people! I wasn’t wrong. I also chose the business school at Imperial because of the uniqueness of the courses it offers and the experience of the professors, especially with regards to innovation and entrepreneurship. Imperial’s strengths in research and its industry connections mean that we get to learn things straight out of the research lab. I find that extremely appealing even if it means that we’re sort of our professors’ lab rats! It definitely gives graduates an edge, but I find it even more exciting to think that we could be amongst the first to apply the research and observe the outcome…making us King of the Lab with our very own guinea pigs! Now why would you pass up a chance like that?!

My first few classes have already challenged me not only to learn a great deal of new material, but also to dig deeper at a personal level to learn more about myself, as well as to envision the type of world that I want to live in. The experience so far is something I will not forget and I’m excited to share this year with you.

Please feel free to comment on my posts – you can tell me what you think or what you’d like to read more about…. If you’d prefer to comment on my terrible grammar, the floor is yours! With that said, if you have more personal questions to ask me, drop me a message and I’ll do my best to get you an answer.