After spending the entire (and I mean ENTIRE) night with my syndicate team to complete an assignment for our accounting class, I’m probably a little too tired to be writing anything coherent right now – but the fact that I’m actually free at the moment makes me feel like I MUST write!! I’ve got to introduce you to the people I spend an unreasonable amount of time with to achieve…*ahem*…. great things for the future!! You will see.

In the MSc programme, each student is assigned to a “syndicate team” (decided by the school), a group of people you work with on all assignments (except, perhaps a couple) throughout the semester. The following term, you have the opportunity to change teams and experience working with others. It’s great because it helps you to get to know your classmates better.  With the consent of my awesome team mates, here is a picture of the six of us messing around while shooting a video for our Organisational Behaviour and Human Resources (OB HRM) class:

From left to right: Me (I started with myself. What a loser move!), Gabriella (Tatti), Damion, Vakee (Baby), Zach (Sugar) and Tanin

Meet “Six and the City”

The story behind the name : …well, there really isn’t much of a story. We had fifteen minutes to come up with a name, a team “constitution” and a class name (which somehow ended up becoming “The Avengers”. It was a class vote so I can’t tell you about that!).  “Six and the City” happened a few minutes before time was up – Tatti suggested it after making a joke about how we’re SIX and living in the big City now. The girls loved the name….the boys were not as keen, but we won them over pretty quickly after the architect in the group (Sugar) began imagining all the fun he could have re-adapting Sex and the City’s paraphernalia. Check  out what he did for our “Secret Facebook Group”: 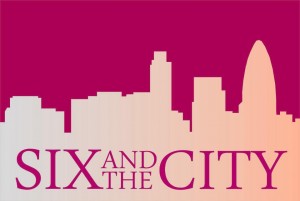 Damion’s been worried for some time now that the girls have too much power in the group – I don’t blame him….we did end up studying the luxury goods industry for our accounting project and had the Sex and the City theme song going in the background of our HR video! Girl Power!

The Physics of Dynamics.

While it’s not always easy working in a group, I love trying to make it work. We argue quite a bit (ie. I’m currently pissed off with a member of my team!) and are gifted with the talent of slowing each other down with the silliest things (think philosophical debate about whether Vakee said “I will call you” or “I will kill you”), but I enjoy every moment of it even though there are a lot of times when I’d love to just SCREAM (ie. now)!  The biggest difficulty – and I think my group would agree on this – is communication – we’re all from different parts of the world with different mother tongues and styles of getting the message through. It gets messy, especially on days when you just want everyone to do things the way you’re used to! So far though, we’ve managed to sort things out during our “recap group therapy sessions” where we take turns speaking about how we feel and how we’d like things to be treated differently. It’s probably hilarious to watch as an outsider because we literally move from one person to the next asking each person to talk about their feelings… and then we paraphrase to make sure we’re all on the same page. ….  it works so who cares what it looks like!! People on the brink of group divorce, get yourself into therapy!!

Second difficulty, I would say that organising/distributing work effectively has been hard because we want to try to do as much as possible as a “team” vs. a “group”, but we’re learning now that it’s probably not the most realistic way of managing our time! It probably sounds obvious…..but it really isn’t when you’re in the middle of it all!

Up to now, we’ve completed two assignments together, one for our OB-HRM course and the other for Accounting. You’ll have to check out the following post to see the final product (a 5 min video on cross-cultural differences )!