I was going through the pictures on my phone today when I came across a catalogue of photos from a really fun night I had at the Business School’s cross-programme event that was held back in November. I should have posted about it ages ago, but it sort of got forgotten in the midst of all the deadlines. So here’s a slightly delayed peek at what went down that evening:

As an intern for the events team at the Business School, I help out at some events with things like set up, break down and registration. Since I was going to be attending the cross-programme night, I figured it would be fun to help with some of the organization too, especially since I knew there was going to be a big game to get people ready for. 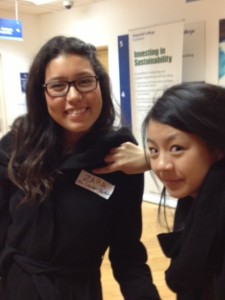 Though it may sound completely dull to register people for an event, I think you have to do it once to see that it’s actually a great way to wind down after a long day. People approach you smiling (that free smile is always awesome!), you smile back, look for their name and give directions. You basically get to meet everyone really quickly and when you work in a team, you get to bond with your mates. In my case, I got to know a bunch of other interns from other programmes and had a fun time strategising with one of them over how we could get more people to register with us since most people failed to notice that we were doing the same thing as the other interns – except from the other end of the table (yes, we assessed the market environment and plotted out a short-term plan to increase our market share).

The event was held at the Queen Tower Rooms (A.K.A. the cafeteria). There was great food with lots and lots of people from all the business programmes to talk to and get to know. People in general like to stick with those they already know, I think it’s quite natural – I do it because I can get super shy around people I don’t know – at times to the point that I can’t speak English properly. Sigh. So the game for the night was selected on the basis 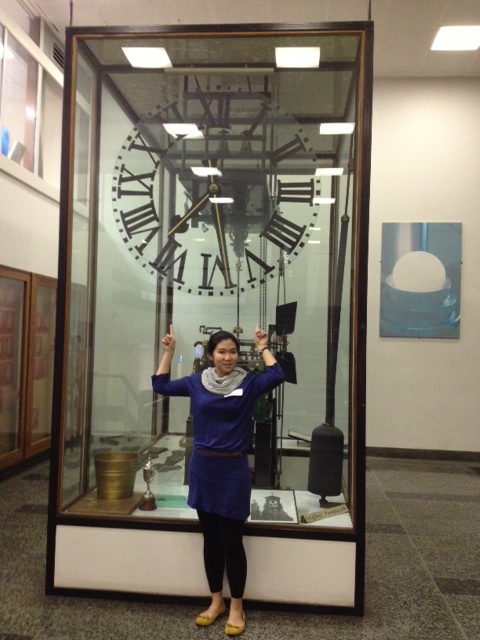 that it would get people to step out of their comfort zone and mix with others they haven’t met before. The game was simple: teams were formed randomly to include individuals from different programmes. Each team was then given a list of (if I remember correctly) approximately 50 things that could be found either on or near campus. The objective was to find all of these items within an hour – take a picture of themselves with it and bring the photo back to be checked. Items included things like – the British flag (which turned out to be quite hard to find for some reason!!), a man eating ice cream, a skating rink, an angel (my team snuck into a church during some choir rehearsal, snapped a few pictures and ran away as quick as we could!).

We interns were super excited to take part since we weren’t involved in the making of the list – and because most of us had never met, it seemed like a great opportunity to get to know each other better. Perhaps it was naïve on my part, but I really expected everyone who attended the event to be super pumped about playing the game and competing against friends. Instead, I was rather surprised to see that there were individuals (though probably a minority) who refused to participate. They were generally the people who stuck with those they knew already. I thought it was a little pathetic, especially for a person attending an event like this! I know that some of them felt that it was perhaps a little too

childish while for others….I think they simply felt too cool for the game (or so I tell myself , haha – maybe there was some better reason that we didn’t know about: ie. A massive chocolate fountain was expected to arrive within the hour and they wanted dibs – ok, that’s justifiable because we totally missed out). I personally think that what makes a “cool” person is the ability to just go along with whatever is taking place – being enthusiastic about new experiences no matter how strange/childish they may appear at first glance… or what kind of a fool you may risk looking like afterwards – because honestly, what have you got to lose, really?!…your dignity at 25 yrs old?! Back home, the “up for everything” attitude is what makes you stand out because it means you’re open to a few good laughs. Now that’s a cool person

While running all over campus, my team bumped into a number of other teams. One team in particular seemed to be on our tail, waiting for us to find an item so that they could just step in and take the picture they needed with less effort. Clever. Running away was no easy feat and it was quite hilarious how we were constantly watching our backs! It was hard not to get into the game!

Here’s the guy eating an ice cream (no one said we couldn’t interpret what was on paper! haha) 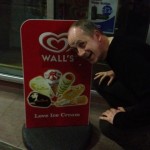 A guy with a tattoo (a classmate, actually, who has a tattoo that signifies himself apparently!) 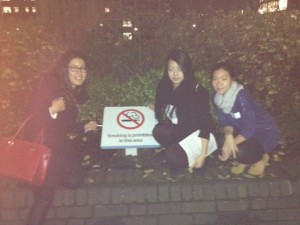 …. and the random guy we stopped because we needed his suitcase. His friend decided she wanted to be in the picture too!! 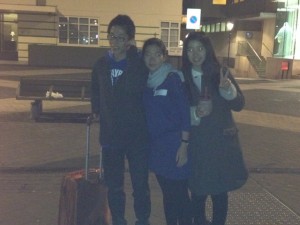 I’m not exactly sure what this was anymore, but it’s sort of hilarious.

We came in at third place and here’s what we won! : 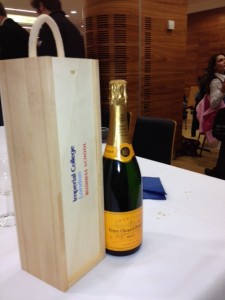