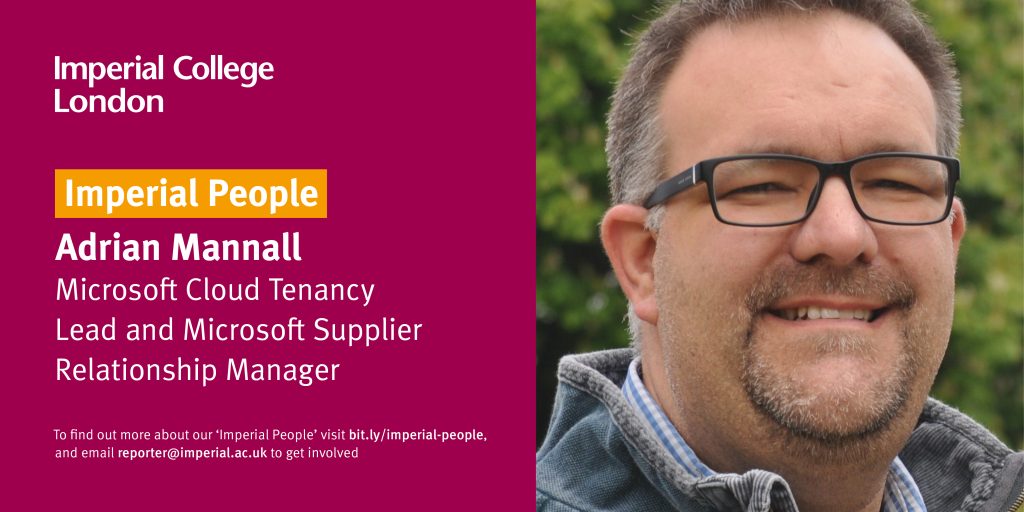 “We were asked if there was anything we could do to help with running an online conference. Our CIO said: ‘I’ll put you in touch with Mr Office 365.’”

I joined Imperial in 2004 as one of four Faculty Support Managers in ICT. Ten years later, at the end of 2014, I was offered the opportunity to manage a project to move staff and postgraduate student mailboxes into Office 365. Following that, I took on my current role of managing Microsoft cloud services, Office 365 and Azure. These services are used widely across the College: 22,500 students and members of staff store over 430 TB of files on OneDrive for Business, while Office 365 delivers more than 18 million emails into user mailboxes each month.

The use of Teams has been steadily increasing, too. At the start of 2019, we had about 2,000 active users – when we got to November, that figure had reached about 6,000 regular users. The numbers were creeping up, but it was a slow-burn thing. During the first two months of this year, we saw quite a rise: by February, we had over 15,000 users. When it became obvious that the College was going to close, we asked ourselves: ‘What’s our response going to be?’. We wanted to push people into something that we already had licences and training materials for, and Teams was there and ready to go – by the end of March, we had over 22,800 active users of the platform.

In the first week of lockdown, I delivered a training session on Office 365 – originally intended as a Lunch and Learn event for the PA and Admin Network – as an online seminar. On the day, around 800 people watched live, and the recording has since been viewed by more than 350 people.

I’ve also helped two different groups of medical staff to use Teams deliver live events covering COVID-19 and its impact, including a seminar for neo-natal specialists and a half-day conference for cardiologists. The conference came about after one of the cardiology doctors at Imperial asked our Chief Information Officer, Juan Villamil, if there was anything we could do to help with running an online conference – he said: “I’ll put you in touch with ‘Mr Office 365’.” The next thing I knew, we were organising this conference with 32 different speakers – our team in ICT provided the set up and the software, and I was the producer and coordinated it all.

Since the lockdown, my mailbox has exploded – so apologies if you’ve emailed me and not yet had an answer. I find it’s easy to become absorbed in delivering the services, so now I have a couple of breaks scheduled into my calendar. I’ve been using the time that would have been spent commuting to enjoy a leisurely breakfast and the sunshine in our garden before heading up to my “office”. I enjoy the opportunity to have lunch with my wife and son and hear about what they have been up to during the morning.