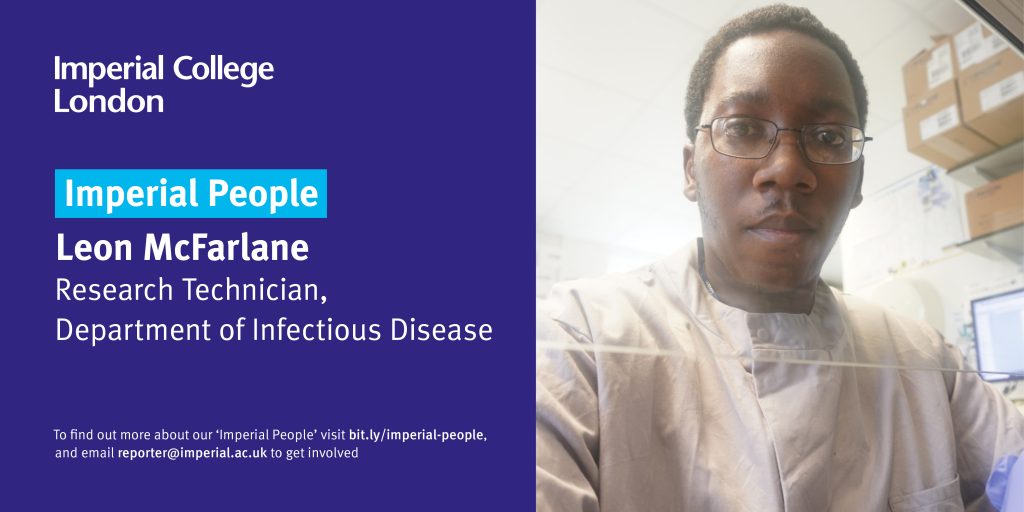 “We started with animal studies and in June, began human clinical trials – that’s the quickest we’ve ever been able to move a vaccine candidate from the lab to the clinic.”

I’m currently working in Professor Robin Shattock’s lab. My background is in biomedical science, but I made the transition into infectious diseases research when I completed an internship with the Sanjeev Krishna group at St George’s, looking at malaria drugs and inhibitors.

I worked there for a year and a half, but I knew I was more interested in the immunology side of the research. I completed my MSc in the Immunology of Infectious Diseases at the London School of Hygiene and Tropical Medicine. Following this, I started an internship at Imperial at the International Aids Vaccine Initiative working on HIV clinical trials, which connected me with Professor Shattock.

Ordinarily we work on mucosal clinical trials, but after we received the sequence for the SARS-COV-2 virus in January, we started working on a candidate vaccine. We made a self-amplifying RNA vaccine in under a month, but once you have a candidate the process can take a long time. We started with animal studies and began human clinical trials in June – that’s the quickest we’ve ever been able to move a vaccine candidate from the lab to the clinic.

The great thing about this lab is that the academics are mixed with the technicians running the clinical trials. My job is to test the immune cell responses from vaccine participants and see what’s happening. This is a massive clinical trial for us so it’s been great to get some help from the academic side. Normally we might have 60 participants per trial over a year, but we’ve had 120 participants for COVAC1 give samples for various timepoints in three months. It’s meant we’ve had to change the way we run things.

Working on the vaccine trial meant I was going into work throughout lockdown. It has been surreal. London became a ghost town; I would have a whole carriage to myself on the tube. Even with my understanding of how infections spread and all the infection control measures we adopted, it was still a little ominous being on the frontline. Fortunately, we all stayed healthy throughout.

Hopefully by the end of October we should have COVAC1 safety data through. The self-amplifying RNA, which makes up the vaccine, is new so the safety aspect is very important. Then we’ll start to assess the efficacy and scale the trial up. We’re taking a very collaborative approach – we’ve been in contact with the Oxford vaccine trial throughout. It’s not a competition, we all just want to try to find something that’s safe and works.

I’m really proud to work for Imperial. They’ve made a very big push on diversity and that’s something I’m proud to be a part of. There aren’t very many African Caribbean people in the sector and it’s good to know that Imperial are working to change that.