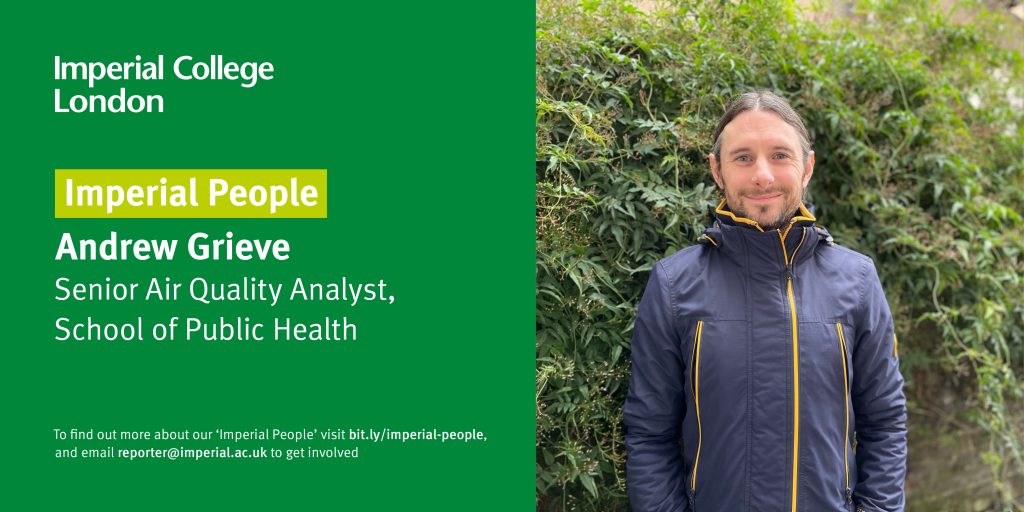 “I’ve been able to combine my twin passions of air quality and digital technology to design and develop several air quality apps over the years.”

I suffered from asthma as a child and always had a Ventolin inhaler in my pocket from primary school, so I was always interested in lungs and breathing and what would trigger an attack.

I studied Environmental then Computer Science at Stirling University and was keen to pursue a career in science but ended up in the School of Public Health’s Environmental Research Group (ERG) somewhat by accident after I saw a job advertised in the back pages of New Scientist – which I picked up by chance in Tesco on South Clerk St in Edinburgh. I never imagined I’d end up living and working in London, but I feel incredibly lucky and grateful to have landed in ERG.

My current role is quite varied but it’s broadly around communicating air quality. I’ve been able to combine my twin passions of air quality and digital technology to design and develop several air quality apps over the years. I’ve also loved collaborating with artists and theatre-makers on air quality projects and I’ve just started discussions with an artist on a new project that I’m really excited about.

The data from the London Air Quality Network has been used by the government to investigate the relationship between long-term exposure and COVID-19 mortality, so keeping all the stations up and running has been a real priority for the team. We have also been rolling out a new network of air quality sensors to hospitals across London to provide additional data to NHS trusts and we’re moving on to schools next. I also contributed to a documentary on the impact of coronavirus on the Black community with the actor David Harewood – it should be airing in March.

I think like many teams I’ve been amazed at how well we have adapted to going from essentially all being in one room together to being remote for almost a year now. But it’s also been tough. The loss of all those little human interactions you have in an office or lab or classroom or those chance conversations you have while you’re washing your cup in the kitchen. And I’m sure I speak for many when I say that homeschooling has put an incredible strain on work and home life.

In September, we received a letter from the Mayor of London thanking us for keeping the network running and for feeding into the UK’s Air Quality Expert Group call for evidence on the impact of lockdown on pollution levels in London. It meant a lot to us to receive that.

I’m currently recording drums for the new album of a band I used to play in Edinburgh. We’re all scattered across the country now but we started passing a few demos between us on email and having Zoom calls to discuss song structure. It’s sort of snowballed now into an album! It’s nice to have something creative to do in the evenings.