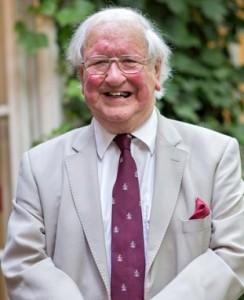 The Department of Surgery and Cancer is delighted that Michael Uren has been knighted in the Queens New Year’s honours list 2016.  Michael received the honour in recognition of his philanthropic activities. Over the last 8 years, The Michael Uren Foundation has given an astonishing £100m to good causes, across a wide range of topics, many of them unheralded.   His Foundation has been a staunch supporter of the MSk lab for almost a decade, but recently changed the course of Imperial by  pledging £40m to support the creation of the Michael Uren Biomedical Engineering Hub at White City Campus. This 12 story building will allow Imperial to grow the next generation of engineers, scientists and medics in a purpose built environment where the lower floors house clinical intervention space, allowing devices to be designed, developed and trialed on site.

Sir Michael is a familiar face to many in the Department, and particularly in the MSk lab, having visited on several occasions to see the work his generous donations have supported.  The Foundation’s gifts have played a vital role in helping us develop new areas of work, purchase cutting-edge equipment and build and sustain a talented, cross-disciplinary team of researchers. The flexibility afforded by these gifts has also been exceptionally important in allowing us to direct philanthropic resources into priority areas where corporate and research funding is not currently available. We look forward to welcoming Sir Michael on his next visit.