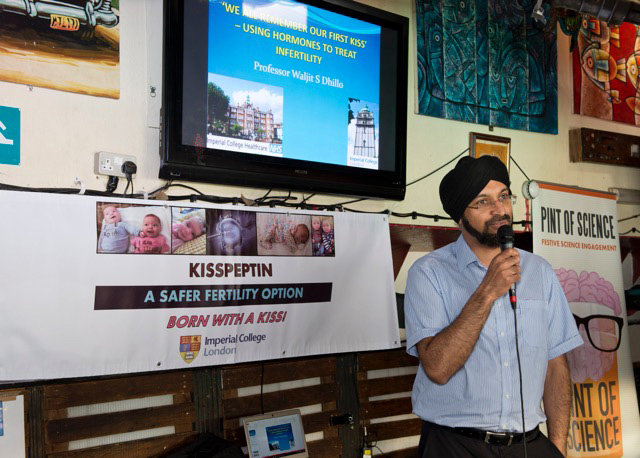 Between 23-25 May 2016, the 3-day Pint of Science festival took place across 50 different cities in 9 countries across the world and Imperial College was part of the fun. The ‘Our body events’ organised by scientists from Hammersmith hospital (Flavia Fioretti, Serena. Tommasini Ghelfi and Sheba Jarvis) organised scientific talks by staff from the faculty of Medicine staff on the floating pub, Tamesis Dock, across the river from the Houses of Parliament. Pint of Science was founded by previous postdoctoral scientists from Imperial College and has continue to run successfully each year since 2013 with the events designed to engage the public in science and making scientific research accessible to everyone in the relaxed pub atmosphere!

On the first night, speakers Dr Amanda Cross talked about her research studying the effects of diet on health whilst Anna Domogala and Dr Anushruti Sarvaria talked about manipulation of the immune system to treat disease. On Tuesday, Professor Waljit Dhillo spoke about his pioneering work on kisspeptin, a hormone important for puberty and his translational work at using kisspeptin to help make fertility treatments safer which has led to 30 healthy babies. Dr. David Macintyre talked about his work on characterising the implications of bacteria within the female reproductive tract and the importance of the ‘lactobacillus’ also found in yoghurt in terms of pregnancy outcomes.

On the final night, Dr Nick Oliver discussed the ‘bionic man’ and focused on the state of the art around the artificial pancreas in the treatment of type 1 diabetes whilst Dr Nicoletta Nicolau talked about the secret dreamworld of anaesthesia. Bring the scientist out to the public was hugely successful at getting them out of the lab and all talks were met with excitement and a large number of audience interactions with the speakers. The Pint of Science festival was a success and has helped to whet the scientific appetites of the public.