A new study carried out by Peter Sarkies (Transgenerational Epigenetic Inheritance & Evolution) in collaboration with Eric Miska (Gurdon Institute, Cambridge) reveals astonishing insights into the evolution of transposon-silencing mechanisms in nematode worms. Transposons are “selfish” DNA pieces that insert themselves into the genome. Like a computer virus, they copy themselves and proliferate, which can disrupt essential gene functions. Because transposons are so disruptive, there is huge selective pressure on organisms to silence them and stop them spreading. Organisms have evolved ingenious ways to suppress transposon activity, especially in the reproductive cells, where a transposition event affects subsequent generations. The front line of defence against transposons in most animals, from nematode worms to humans, are tiny sequences of RNA, known as Piwi interacting small RNAs (piRNAs). These piRNAs patrol the genome, seeking out and controlling transposons. 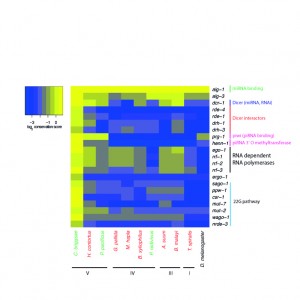 The phylum-wide study, published this week in PLOS Biology, sheds light on a highly dynamic evolutionary history, which was completely unexpected, whereby this broadly conserved transposon-silencing system has been lost in nematodes on several occasions. The study shows that piRNAs have been completely lost in four of the five nematode groups, or clades. Only Clade V, to which the lab model Caenorhabditis elegans belongs, use the piRNA pathway. In the absence of piRNAs, nematodes use a diversity of other mechanisms to control transposons. The authors suggest that the piRNA pathway was present in the most ancestral ur-nematode, but then independently lost in other nematode lineages.

However, nematodes without this piRNA pathway are not riddled with transposons, but have evolved two other pathways that control transposons in nematodes. One is a novel transposon-silencing pathway known as 22G-RNAs. This was found in three clades (Clades III, IV and V). The other is an ancient pathway, dependent on RNA-directed DNA methylation, which is found in the oldest nematode clades (Clades I and II). It is also found in plants and fungi, but has been lost in most animals. This finding begs the intriguing question: Might this be the ancestral mechanism of transposon silencing in animals?

“It’s completely unprecedented and shocking to see so many independent losses of the piRNA pathway across a single phylum. There are no other examples of that in the animal kingdom that we know of,” says Peter Sarkies from the CSC’s Transgenerational Epigenetic Inheritance and Evolution Group. If we can understand the selective forces that led to piRNAs being lost, says Sarkies, we might be able to get some insight into why transposable element proliferation is something that occurs more frequently in cancer. In addition, we might be able to design new treatment against parasitic nematodes, such as filarial nematodesresponsible for elephantiasis and river blindness, he adds.

The work was carried out in collaboration with, among others, Eric Miska from the University of Cambridge, and Murray Selkirk from Imperial College London. 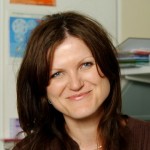 Petra Hajkova, the head of the CSC’s Reprogramming and Chromatin Group, has been awarded a European Research Council (ERC) Consolidator Grant of €2 million. The grant will fund cutting-edge research into the dynamic character of nucleic acid modifications during embryonic development in mice. Elucidating these mechanisms will prove crucial to further our understanding of the regulation of epigenetic information in vivo and during reprogramming back to pluripotency in vitro. “Studying the mechanisms underlying reprogramming could enhance our understanding of epigenetic changes observed early in cancer,” says Petra. “I’m very excited about the grant because it will give us the opportunity to carry out some outstanding experiments,” she adds. Altogether 5 CSC researchers have been awarded one of the highly endowed ERC grants. Besides Petra Hajkova, these are Jean-Baptiste Vannier, Irene Miguel-Aliaga, Till Bartke and Amanda Fisher.

Peter Sarkies from the CSC’s Transgenerational Epigenetic Inheritance and Evolution Group has been awarded a Junior Research Fellowship (JRF) from Imperial College London. Peter, who joined the CSC from the University of Cambridge in October 2014, says the funds will be directed towards in lab evolution experiments with Caenorhabditis elegans to study the interaction between transposon-silencing mechanisms and evolutionary novelty in real time.

“It’s going to really help me make the transition from being a post-doctoral researcher to running an independent group, and give me the support I need to develop an innovative research programme,” says Peter. “I’m looking forward to strengthening links between Imperial and the CSC, so together we can conduct cutting-edge research,” he adds.

Peter Sarkies is the CSC’s third Junior Research Fellow, Andre Brown and Tobias Warnecke (both from the Institute’s Integrative Biology Section) received theirs in 2013. 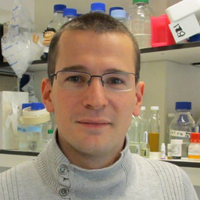 ERC Starting Grant awarded to Jean-Baptiste Vannier– Jean-Baptiste Vannier was awarded a prestigious European Research Council (ERC) Starting Grant of €1.5 million for five years. He was selected from 3,273 applicants (9 % success rate). ERC Starting Grants support up-and-coming scientists who are about to establish a new research team and start conducting independent research. Jean-Baptiste, who joined the CSC in the autumn from CRUK, will investigate the role of telomeres in DNA replication. When telomeres fail to fold into these structures, the genome becomes unstable, which is a hallmark of every cancer. 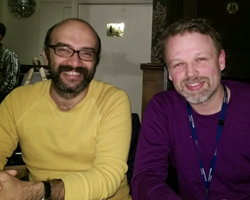 Synergy: Leverhulme Trust Research Project Grant awarded to CSC and Imperial College Researchers – Vahid Shahrezaei from the Mathematics department at Imperial College and Sam Marguerat from the CSC’s Quantitative Gene Expression Group will be leading the £250,173 award to investigate noise in gene expression using single cells. The collaboration will unite Marguerat’s experimental skills with Shahrezaei’s theoretical knowledge in order to gain insight into the process of stochastic gene expression and protein noise, which describes the fluctuating number of molecules inside cells that causes seemingly identical cells to behave differently.

“From bench to bedside – is personalised medicine the future?” CSC Chain-Florey Fellows invited leading experts to have their say

The MRC Clinical Sciences Centre’s Chain-Florey Fellows met at the annual workshop last Thursday (13 November) to present the researchthey have been working on at the CSC, and take part in the lively discussions that followed.

The CSC’s Chain-Florey Clinical Research Fellowships offer medical graduates the opportunity to complete PhDs in basic science at the CSC. Clinically trained Fellows develop a unique appreciation of the practical application of treatments and bring a valuable perspective to science research. Since the scheme’s inception in 2009, 17 Fellowships have been awarded and graduates have emerged ready to tackle clinical research questions with scientific precision. The scheme is jointly funded by the MRC and NIHR through the Imperial BRC.

Every year, the most senior fellows showcase their research in front of an audience of medical experts. This year, Dr Allifia Abbas Newsholme, Dr Philip Webster and Dr Andrew Innes gave fascinating talks that reflected the high quality of training in basic science that they received on the three-year fellowship.

Allifia Abbas Newsholme, who is now close to completing the fellowship with Amanda Fisher’s Lymphocyte Development Group, kicked off the Chain-Florey presentations with a talk on ‘Non-invasive imaging of imprinted gene expression’. She is working to devise a system to image changes in the expression of the CDKNIC gene. Mutations in this gene cause Beckwith-Wiedemann syndrome, which is characterised by an increased risk of tumour formation. Originally from Dubai, Allifia embarked on the fellowship with an undergraduate degree from the University of Leeds, an intercalated BSc in immunology at the Royal Free in London, and two years of training in her specialty of Nephrology at the London Deanery.

Philip Webster, who has completed his PhD with Anthony Uren’s Cancer Genomics Group, presented his research on the genetics and kinetics of BCL2 driven lymphoid malignancies. BCL2 is a gene involved in preventing programmed cell death, known as apoptosis. If the gene is overexpressed it prevents apoptosis. Cells remain alive for too long, leading to cancers and autoimmune diseases. By identifying genes that are commonly mutated with BCL2, Phil altered their expression in lymphoma cells to investigate the role they play in the development of lymphoma – a cancer of white blood cells. Phil trained at Nottingham University Medical School and has worked across the UK and Australia. In 2007, he came to London and later began his specialist training as nephrologist. Having returned to his specialty training in renal medicine, he intends to pursue an academic career path. He is currently renal registrar at Imperial College Healthcare NHS Trust.

“The Chain-Florey Fellowship is an excellent opportunity to acquire solid, basic science training for any doctor intending to have a career in academia. I wanted to gain knowledge, experience and learn new techniques within the genomics of the immune system and then apply this to my interest in autoimmune diseases,” he says.

Andrew Innes’s talk was titled, ‘Investigating senescence regulation: a telomere damage model.’ Andrew, who has almost completed the fellowship with Jesús Gil’s Cell Proliferation Group, looked into the genes that control senescence in the natural ageing process. “Senescence is well known for its role in controlling cancers, but its role in fibrotic disorders is less well understood,” he says. “I’m interested in post-transplant fibrotic disease, specifically Graft Versus Host Disease (DVHD). There’s a lot of evidence that this mimics autoimmune disease, but there is also evidence that could link it to senescence.” Andrew approached the bench with a firmer grounding in basic research than many other Chain-Florey Fellows because he had finished a nine-month Academic Clinical Fellowship at Imperial College with Francesco Dazzi. After training in Dundee, Glasgow and Manchester, Andrew moved to London in 2008 to specialize in Haematology.

Their talks were followed by a riveting panel discussion on the future of personalized medicine. The panelists grappling with this divisive topic were:

Dr Peter Campbell – Head of Cancer Genetics and Genomics at the Wellcome Trust Sanger Institute and joint head of the Cancer Genome Project.

Professor Irene Roberts – Head of the Developmental and Stem Cell Biology Group at the Weatherall Institute of Molecular Medicine.

Dr Anne-Marie Coriat – Director of Capacity Skills and Infrastructure at the MRC.

Dr Jeremy Griggs – Biology Leader and Biologist in the Discovery Partnerships with Academia team at GlaxoSmithKline.

The afternoon ended with a keynote speech from Dr Peter Campbell. He discussed ‘the vast somatic mutational landscape of cancers’, with particular reference to the molecular pathology of Acute Myeloid Leukaemia (AML).

To read more about the CSC Chain-Florey scheme, its sponsors and advocates, current and previous Fellows, please visit the CSC website.

Read “From bench to bedside – is personalised medicine the future?” CSC Chain-Florey Fellows invited leading experts to have their say in full