What do rectal examinations, liver surgery and cardiovascular interventions have in common?

Apart from being medical and surgical procedures, they are nowadays important topics of interest in biomedical modelling and simulation research. Earlier this year I had a paper accepted at the 6th International Symposium on Biomedical Simulation (ISBMS) and a month ago, in October, I went to Strasbourg to present it. I was looking forward to hearing some Alsatian being spoken, although given my basic French skills I didn’t actually notice a difference. ISBMS was organised by the SiMMS group at Imperial College London and by the SHACRA team at INRIA. The event was hosted at IRCAD (Research Institute against Digestive Cancer) in a high-tech room that resemble those at the UN where important topics are also discussed. I found the symposium a great opportunity to discuss new approaches and challenges in the area among experts in the field. 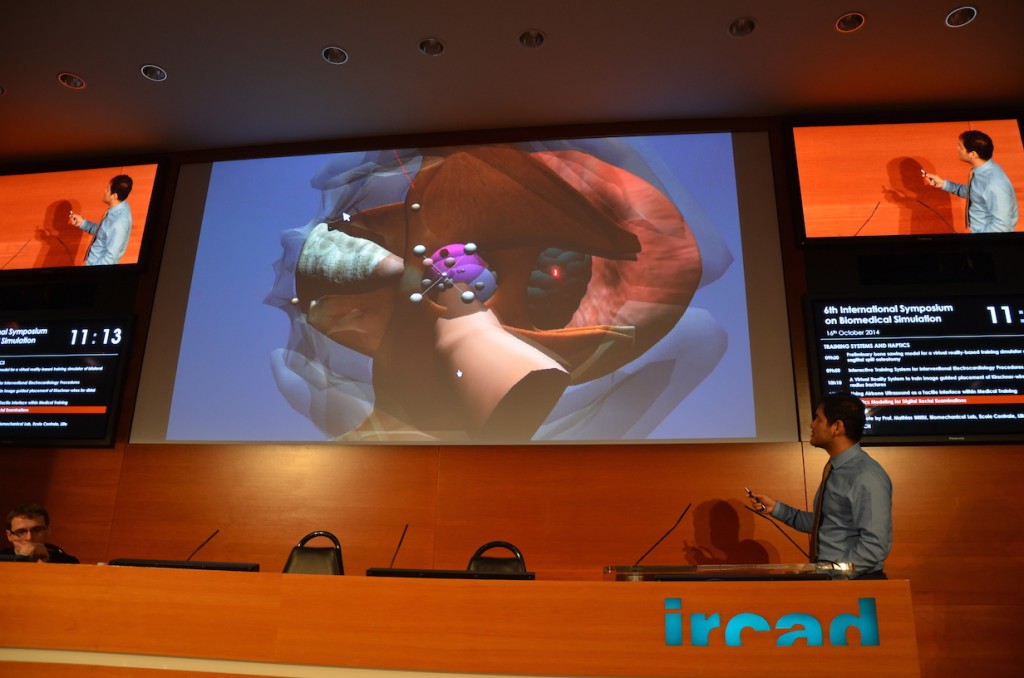 Keynote speakers included Prof Mathias Brieu (Biomechanical Lab, Ecole Centrale Lille) who signalled the importance of modelling patient-specific data and the need for parameters that allow modelling differences in patients. Francisco Chinesta (Ecole Centrale Nantes) and Elias Cueto (I3A, Zaragoza) presented a computational vademecum (where all solutions are pre-computed) to model organ deformation by the parameterisation and further decomposition of relevant variables that are present during simulation.

I was captivated by the tranquillity of the city and it was interesting to learn how Strasbourg, now home to the European Parliament and Council of Europe, has been inhabited for 600,000 years. The city was occupied by the Romans (Argentoratum, 12BC) and was controlled later on by Alemanni, Huns and Franks (Strazburg, 5th century). The revolution of 1332 heralded 300 years of Strasbourg as a republic, before it was annexed by Louis XIV of France (1681), by the German Empire (1871) and finally by France (1919) following the Treaty of Versailles. Strasbourg Cathedral, III river and the area called Petite-France were beautiful, and this beauty extends to the city’s cuisine…Choucroute, Tarte FlambéeAlsacienne and La Terrine de Canard were exquisite.

Roger Kneebone’s recent feature in The Guardian ‘The Doctor Stitching Together Medicine and Art‘.

Department of Surgery and Cancer

Read What do rectal examinations, liver surgery and cardiovascular interventions have in common? in full