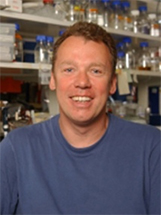 David Carling from the MRC Clinical Science Centre’s Cellular Stress Group was named on the Thomson Reuters’ 2014 list as one of The World’s Most Influential Scientific Minds. The list is composed of 3200 researchers who, in recent years, have published the greatest number of highly cited articles.

Dave Carling is listed within the Biology and Biochemistry section. His research at the CSC is aimed at understanding the regulation of energy metabolism and how cells respond to changes in energy balance. In particular, the Cellular Stress Group focuses on the role of the AMP-activated protein kinase cascade and it’s role in regulating energy homeostasis.

The report draws on information from Thomas Reuters’ databases applying research analytics tools InCites and Essential Science Indicators to compile the list. The 2014 list identifies citations recorded during 2013 for papers published between 2011 and 2013.

On the recognition, Dave said: “A colleague of mine from the Biochemical Journal emailed me to tell me that I was on the Thomson Reuters’ list of the World’s Most Influential Scientific Minds. I’m not a great fan of lists, but it is encouraging to be reminded that our peers value the work we publish from the group. A lot of the time scientific research can be a long and difficult struggle, battling with experimentally challenging systems, so it’s good occasionally to get some mark of recognition.”