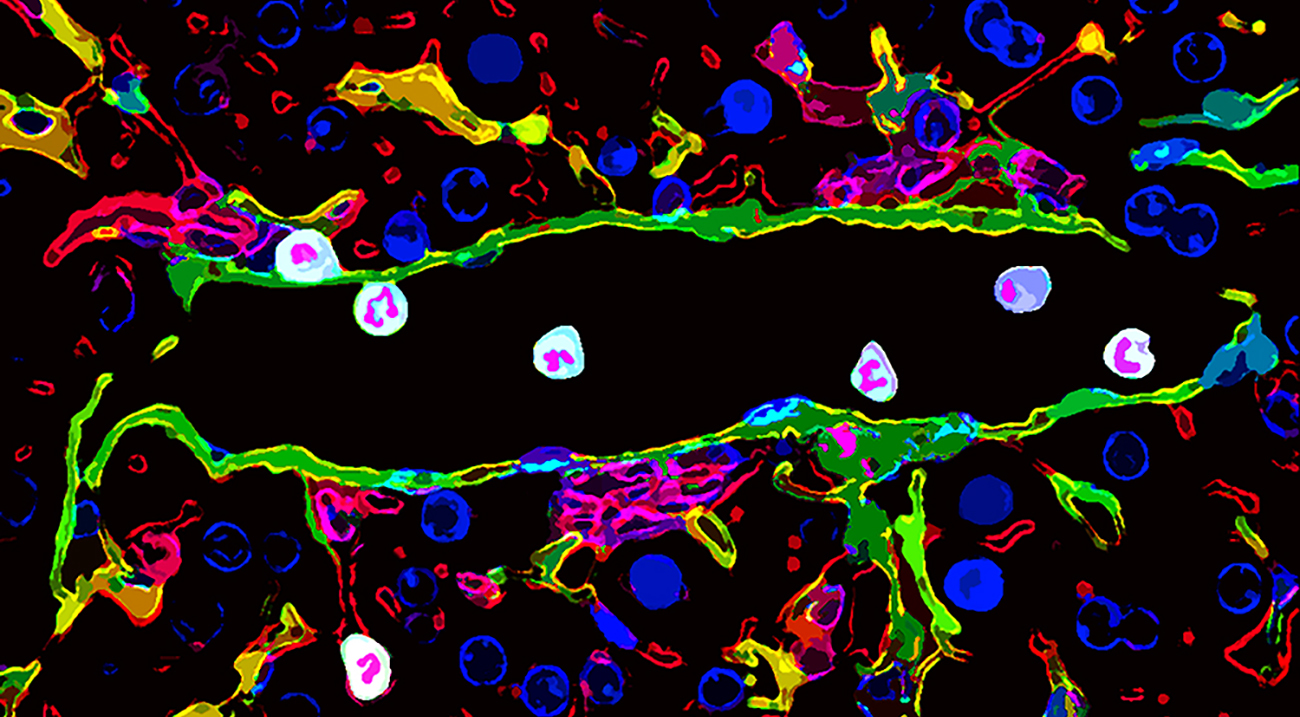 In the post, Neil Dufton asks: How can we bring together imaging technology, art and philosophy to shape scientific research?

When we think of vascular health we are often guilty of presuming that we are primarily discussing the heart. Clearly the heart has a major role to play in regulating your blood flow; once our blood has exited the heart it must supply nutrients to every organ of our body and back to the heart in a cycle that takes about one minute. Any hindrance from a cholesterol-blocked artery or blood clot can have catastrophic results – however by the time we reach retirement our circulation will have exceeded 30 million laps around the body! This incredible feat is made possible by our blood vessels that not only form a vast network during your development in the womb, but are also constantly growing and remodelling throughout our life time. Our Vascular Science research group at the National Heart and Lung Institute is particularly interested in endothelial cells – the cells that line every blood vessel in our body. We want to understand how they work together to grow and form new vessels (a process called angiogenesis), as well as how they maintain these structures in response to injury and disease. 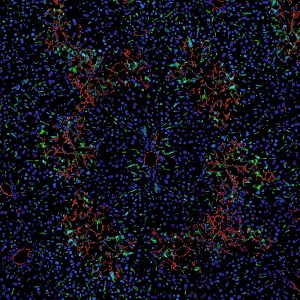 The abundance of blood vessels throughout all our tissues and organs has often meant that, in disorders such as chronic liver disease, the striking changes in vessel organisation, has been cited as a consequence of the disease. However, in our most recent study we challenge this perception by describing how changes in endothelial cells might play a central role in how liver disease begins and progresses to irreversible liver damage associated with conditions such as alcoholic liver disease. This change in perspective may also provide new avenues for both diagnostics and treatments of liver disease, which are currently largely restricted to abstinence and transplantation.

Scientific discovery is inherently creative because you must imagine (and then prove) something that has never been apparent before. New discoveries and ideas rarely occur in isolation but are often formed by combining multiple strands of knowledge, which is why I believe we shouldn’t be afraid to get creative outside the lab to help get creative inside the lab! This can be catalysed by reconnecting scientists with the wider community, particularly the arts, to create a forum for debate and discussion where we challenge our ideas about research science.

Changing your point of view

Father Ted is showing a plastic toy cow to Father Dougal. Father Ted: ‘…OK, one last time. These are small… but the ones out there are far away. Small… far away…’ (Father Ted, Hell 1996). 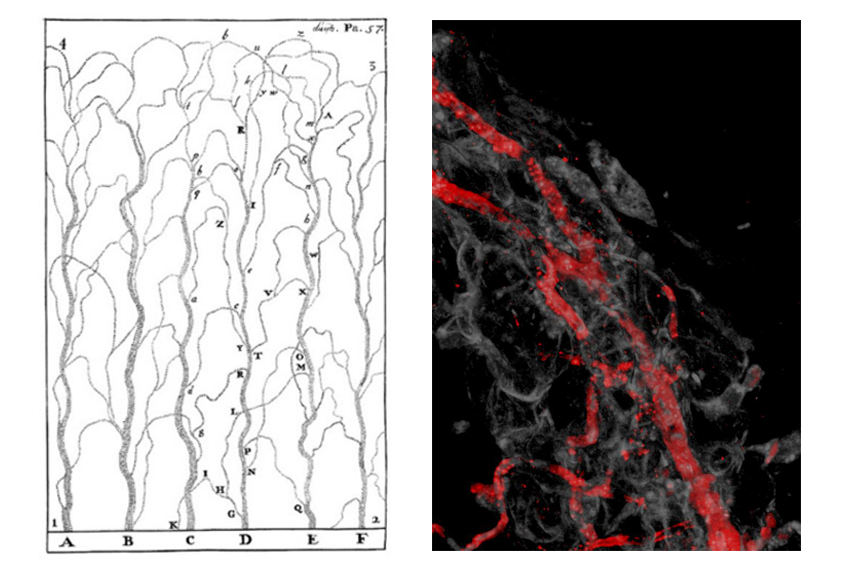 Although perspective appears on the surface to be a simple concept its complexities should not be underestimated – typified by Einstein’s theory of special relativity. In the 17th century, scientists including Robert Hooke and Antoni van Leeuwenhoek started showing the public images from the microscopic world, which were both small and far away (conceptually speaking). Leeuwenhoek was the first person to detail tiny capillaries networks in the tail of an eel in 16861 (left panel) that we are still imaging to try and understand how they form and function today (right panel). Snapshots such as these often make an excellent statement but fail to start a meaningful discussion with the wider community about the problems scientists face both theoretically and philosophically. 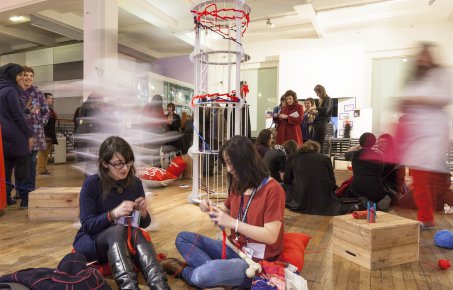 I first became involved in public engagement through a collaboration with textiles artist Rachael Pilston that was facilitated by the NHLI Public Engagement Officer, Ellen Dowell. Together we devised a simple participatory installation called Blood Lines that used a simple knitting technique that allowed the public to make their own woollen blood vessel. Over the last four years this project has been enjoyed by children and adults alike at the Green Man music festivals, Science Museum Lates, and most recently the Royal Society’s Summer Science Exhibition. It is a great way to discuss science on a one-to-one basis with people, who have a surprising level of knowledge, but often lacked the confidence to talk about science. It also provides scientists with an invaluable opportunity to re-evaluate their own highly-specialised knowledge and allows them freedom to express their interests without the usual restrictions of academic science.

Battle of Blister: an animation by Genetic Moo and Neil Dufton, depicting how the body’s immune system is triggered into action in the plasmic interior of a blister.

Taking these concepts one step further, I worked with digital interactive artist Genetic Moo on a fantastically ambitious project called Silent Signal that brought together six artists and six scientists from different fields of biomedical science. The remit was to create six short animated films that would explore new ways of thinking about the human body. We set out to describe some of the complex processes that occur during the formation of a blister and how these might seem innocuous at first but actually are the building blocks of how we understand infection, immunity and vascular inflammation. Genetic Moo generated a fully immersive world, called Blister Cinema, where the public could role-play as a bacteria swimming within the blister, from a blood vessel or start to clear the infection as a macrophage.

These experiences have been hugely rewarding because they have opened up new concepts of how artists and scientists can use innovation, technology and experimentation beyond aesthetics. They create discussion and debate outside normal science channels providing us with new ways to think about and communicate science. Ultimately this can give us, as scientists, new angles with which to approach key scientific problems to unlock new discoveries.

Dr Neil Dufton (@neildufton) is a post-doctoral research associate at the National Heart and Lung Institute (NHLI) and a science-inspired artist. Read Neil’s other blog post.

Neil’s research is funded by the British Heart Foundation and the Silent Signal project was a Wellcome Trust Large Arts Award.