From 0-100 mph is the only way I can describe running my first stall at Imperial Festival and boy what a ride!

If we go back in time eight months, 7 November 2017 to be precise, I was just starting out as one of the very first participants in the Imperial Engagement Academy. The course has been an insight into a diverse array of topics from practical skills in podcasting and writing to audience demographics and project curation. For me, the central theme of the course was to highlight the potential for our research to impact on the wider the community; it is within our grasp to break down the stereotypical image of a scientist portrayed to the world and re-forge it in new and inspiring ways!

Armed with a whole new skill set and the support of my colleagues and the NHLI, I managed to organise, produce and deliver ‘I Cell’ to over 300 people in the Hands-On-Zone at the Imperial Festival 2018. The name is created from the idea that I eat, I move, I talk, I smell. In fact, everything I do is only achieved because of the ability of my cells to recognise and respond to particular signals, therefore ‘I Cell’. The aim for the stall was to get participants to ‘think like a cell’; dispensing with unfamiliar scientific terminology and we asked the question of whether we can communicate biology using universally recognised signs, symbols and emojis. With the addition of a little bit of gameshow glamour with spin wheels, sparkly bowties, a leaderboard and prizes, and we were ready to go!

From spin wheels to cardiomyocytes

It was astonishing to see the ability of young kids (from four years upward) to confidently identify locations by only using the symbols on the spin wheel associated with specific places on our map (top panels). Our first question was to name the place, in this example the restaurant symbol, and tell us what each of the six associated symbols meant and which two would hopefully not be found in a restaurant (answers at the end). This allowed them to progress very quickly from everyday environments to discussing specific biological systems in the body (bottom panels). Finally, we could use this same symbol-based approach to describe how the cells in different biological system perform specialised jobs, like a pilot at an airport or chef in a restaurant, a cardiomyocyte performs key functions to make a heart work but will not help digest your food. One of my highlights of the weekend was when a colleague presented ‘I Cell’ in French re-enforcing the potential for our approach to cross both scientific and language barriers.

Pint of Science – 14 May in the Zetland Arms

Pint of Science is a non-profit organisation that is aiming to break down the stereotypical view of science and scientists by asking scientists to present their research and ideas in their local pub. As opposed to the younger audience of the festival, attuned to learning new ideas, adults tend to have more ingrained perceptions about science, in spite of having instant access to a vast amount of scientific information. One of the most prominent barriers for science communicators to address is how to improve the way people think about, and crucially, understand science – this is collectively termed scientific literacy. 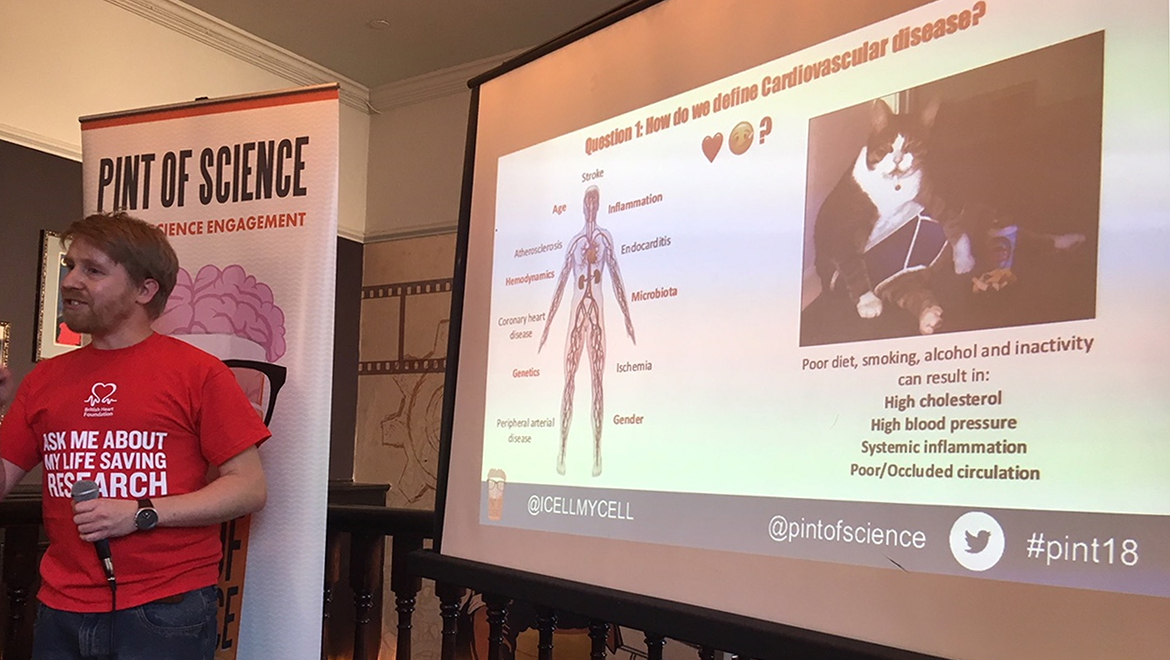 My talk focused on how imagery and symbolism can aid scientific literacy and improve the understanding of scientific terminology.  Through social media and smartphones, we have easy-access to a huge variety of signs and symbols in the form of emojis at our fingertips that could be used to enhance our ability to communicate our scientific research to a wider audience. Therefore, I challenged the Pint of Science audience to an emoji-based quiz to see if they really can be used as an aid to science communication.

It was a fantastically enjoyable evening that created a lot of interesting discussion about how we can use imagery to evoke biological function to non-scientists. I set a series of quiz questions first with words and then again with the addition of emojis. I will let you draw your own conclusions on whether my experiments with emojis in science communication have been successful (below).

Clearly signs, symbols and emojis will not replace the more common methods of science communication. However, I strongly feel that by providing the public with more creative and accessible ways to be involved in conversations about science we stem the tide of misconception, misinformation and even conspiracy (highlighted by anti-vaxxers and flat-earthers). Importantly, this message is not lost on the developers of emoji 11.0 who will be rolling out a new set of science-themed emojis as part of an update due in 2018. Ultimately improving science literacy will empower both scientists and the public and encouraging multi-disciplinary approaches to the most important problems we face as a society.

‘I Cell’ will be presented again as part of the Hammersmith and Fulham Arts Festival at Imperial’s new Innovation Rooms on 9 June, ready to entertain audiences both young and old.

Dr Neil Dufton (@ICellMyCell) is a post-doctoral research associate at the National Heart and Lung Institute (NHLI) and a science-inspired artist.