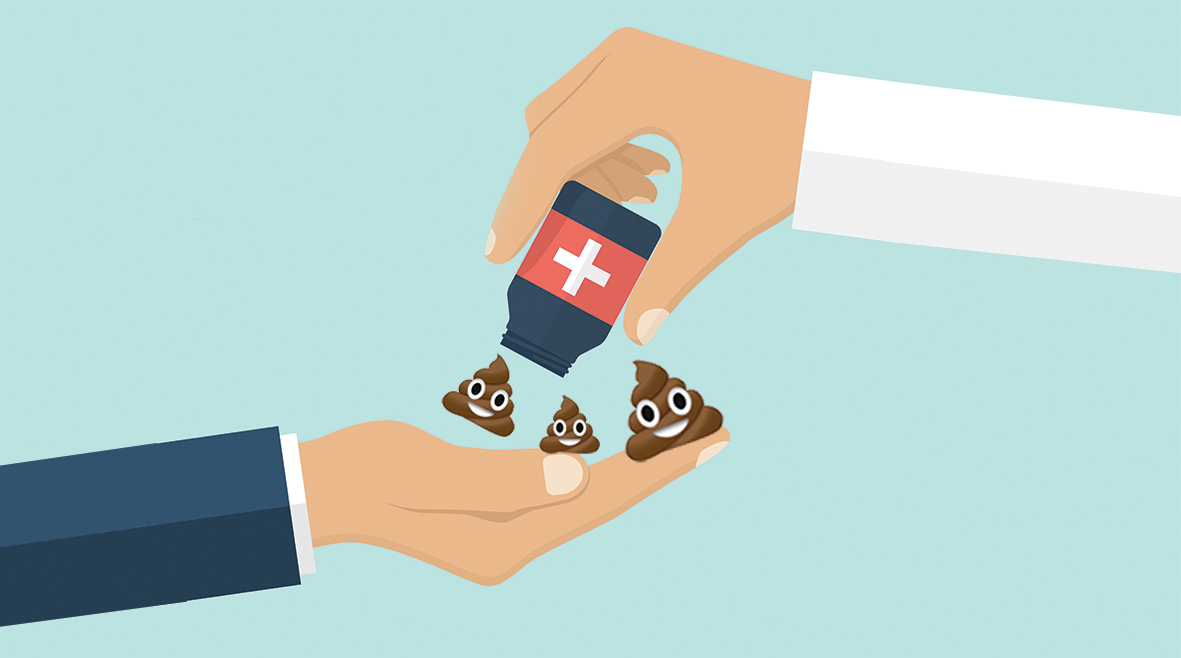 Dr Ben Mullish and Dr Julie McDonald explore the ins and outs of faecal microbiota transplants – it may sound unpleasant but this procedure is proving to be an effective way of treating chronic gut infections.

Most of us can name (or may have had first-hand experience of) a number of different bacteria that can cause serious gut infections, such as Salmonella or Campylobacter.  However, what is less well-known is that we also have billions of bacteria living in our guts that normally do us no harm at all.  Some actually have important contributions towards our health – including prevention of bacterial pathogens entering our gut and causing infections.  Collectively, this huge population of microorganisms living inside our digestive tracts is often referred to as the ‘gut microbiota’.  If anything happens to us that disturbs or kills off members of this gut microbiota – such as exposure to antibiotics, or surgery – then we have greater vulnerability to gut infections, and particularly from a form of bacteria called Clostridium difficile.

Antibiotics are the major risk factor for C. difficile infection (CDI), as loss of protective bacteria allows C. difficile to enter the gut unopposed, infect us, and produce toxins that inflame the large bowel.  In the worst cases of CDI people need surgery to remove sections of the gut, and infection can be fatal in some individuals.  Of particular concern has been the recent emergence of new strains of C. difficile that produce more toxin than previous strains, and which are also more resistant to the antibiotics traditionally used to kill it.

What is faecal microbiota transplant?

Since losing members of the gut microbiota makes someone vulnerable to CDI, could you treat the condition by taking bacteria from a healthy person’s gut and transferring them into the intestines of patients with CDI, with the aim of restoring the gut microbiota back to its original state?  It is this idea that gave rise to a treatment called ‘faecal microbiota transplant’ (FMT). The procedure is pretty much what you would imagine – a stool sample is donated by one person, and part of it transplanted into another:

There have been a number of randomised trials over recent years which have demonstrated that for patients with multiple recurrent episodes of CDI, FMT is a much more effective treatment than conventional antibiotic therapy.  With support from the Imperial NIHR BRC and Imperial Health Charity, Imperial established an FMT service (based at St Mary’s Hospital) back in 2014, and our team has seen first-hand how remarkable FMT treatment can be.  We have looked after a number of patients with severe ongoing gut inflammation from CDI despite many rounds of antibiotics – many of whom have been in hospital confined to bed for months – and who have started to recover within days of a single dose of FMT, and are able to quickly go home and return to normal life.

Not without its flaws

However, FMT is not perfect.  The idea of receiving one is obviously unappealing.  We regularly screen our donors for infections (such as HIV and hepatitis), but this is expensive and cumbersome, and does not totally guarantee that an infection won’t be passed on from the stool of the donor to the recipient.  It can be difficult to maintain a sufficient pool of donors – for instance, if a donor requires antibiotics themselves or develops any gut problems, then they are not allowed to donate for at least several months, and will require rescreening before they are allowed back in to the programme.   There is also complex regulation associated with the administration of FMT that limits its use.  However, if we understood the mechanisms underlying the effectiveness of FMT, we could potentially exploit this to formulate novel, targeted therapies for CDI that avoided the drawbacks of FMT.

The future of faecal transplants

At Imperial, we have been pursuing a number of different routes to move things forward for FMT.  Working with other UK and international CDI and FMT specialists, we are looking at the factors influencing people choosing to become a donor (and remaining one once selected), with the aim of improving the practicalities of this important aspect of providing FMT.  Doctors from the Imperial FMT service have also been some of the lead contributors to the new UK FMT guidelines, helping to provide clear, evidence-based advice on best practice to clinicians providing FMT.

Furthermore, with funding support from the Medical Research Council, we have also been undertaking research on how FMT works as well as it does at treating CDI.  Our studies use a number of techniques that Imperial has a well-recognised reputation for, including new tools to study microorganisms and metabolites that are essential for maintaining human health.  We are applying these in a number of ways, including in vitro modelling, analysis of human samples (collected pre- and post-FMT), and mouse work.

In particular, we have recently identified that valerate (a chemical in the family of short chain fatty acids, produced by bacteria normally found in the gut) is barely detectable in the gut of people with CDI, but is restored to high levels after FMT.  We found that valerate is able to directly inhibit the growth of C. difficile, and that its administration is able to dramatically reduce the C. difficile counts found in mice with CDI.  Other research that we have undertaken has shown that FMT also has effects on the balance of different bile acids in our gut, which appears to impact upon the ability of C. difficile to germinate and grow.  As such, in the future we may be able to treat people with CDI with supplements of simple chemicals or proteins found normally in their gut rather than FMT; however, we first need clinical trials to check this is as safe and effective in people with CDI as it appears to be in mice or in vitro.

Imperial’s work on FMT has been a true ‘bench to bedside’ enterprise, bringing together key clinical and scientific expertise.  Whilst there remains much to learn and understand, we are already making real inroads to be able to better treat this condition.

Dr Benjamin Mullish is a clinical research fellow and Dr Julie McDonald is a research associate in the Division of Integrative Systems Medicine and Digestive Disease at the Department of Surgery and Cancer.

Ben and Julie are members of Professor Julian Marchesi‘s group which is supported by the Imperial Health Charity, NIHR Imperial BRC  and the Medical Research Council.

2 comments for “Going with our guts to find new treatments: faecal microbiota transplantation at Imperial”