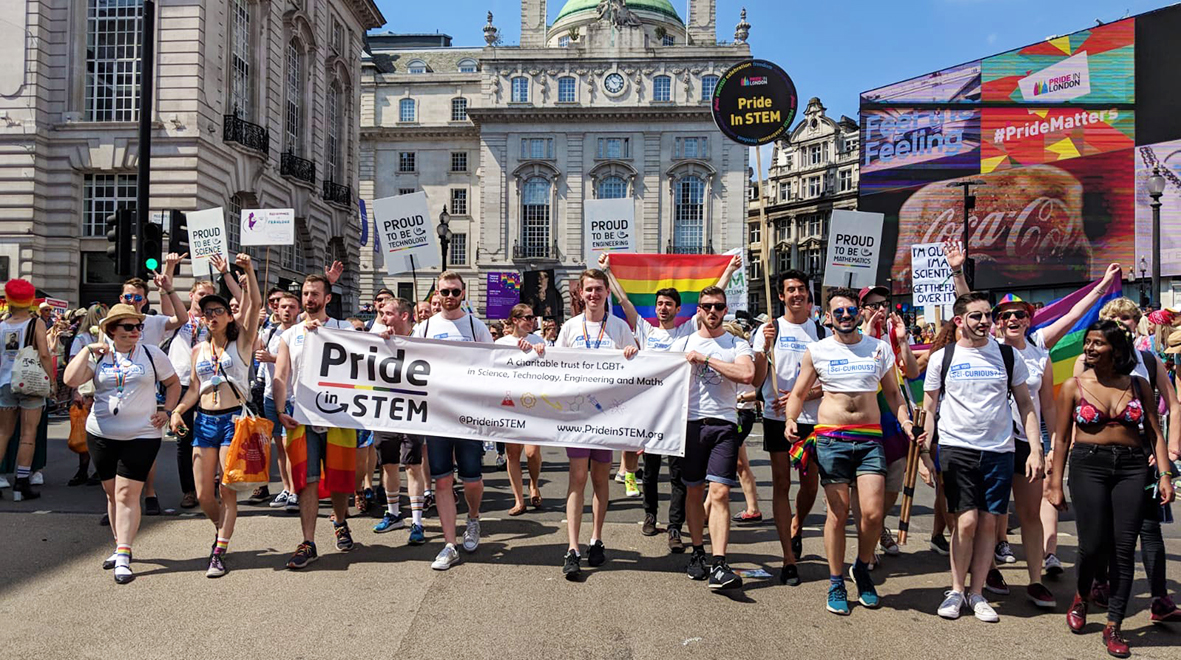 In celebration of LGBT STEM Day, Dr Akif Khawaja shares the small things everyone can do to make STEM more LGBT-inclusive.

With the glitter of the Mighty Hoopla weekend – a LGBT-friendly pop music festival – having finally settled, all eyes are now set on Pride. For many this will mean another (hopefully sunny) weekend of short shorts, tank tops and daytime drinking. In addition to the parade, especially in London, pride month is chock-a-block of events highlighting all aspects of LGBT+ culture and history. This year, Pride in STEM (Science, Technology, Engineering and Mathematics) has been helping to showcase and support LGBT+ people within the STEM fields by organising LGBT STEM Day.

So, what is Pride in STEM and what is LGBT STEM Day?

Starting with the easy one – Pride in STEM is a charitable trust run by an independent group of LGBT+ scientists and engineers. Founded in 2016, Pride in STEM was the brainchild of Dr Alfredo Carpineti, his husband Chris, and Matt Young. They aim to support all LGBT+ people spanning all of STEM and in doing so, raise their profiles and showcase their work. Now as for LGBT STEM day, this was their latest effort to promote the dissemination of work done by LGBT+ STEM staff. It falls on Friday 5 July 2019 (I’m told purposefully chosen as 507nm is the wavelength of the green stripe in the pride flag – 5.07 … get it?!) and the day before the Pride in London Parade.

Are we nearly there yet?

As for the million-dollar question, do we still need events like Pride in 2019 – like LGBT STEM day? Alas, in 2019, we still live in a world where people argue the necessity to hold a ‘straight pride’ for being an ‘oppressed majority’. In a world where a lesbian couple was harassed and assaulted on a London night bus. In a world where being LGBT+ is still illegal in some countries. Taking this into consideration, I would perhaps even say that events like Pride are still as important now as in the days of the 1969 Stonewall Riots which sparked the birth of the Gay Rights movement. Now I’m sure everyone reading this believes LGBT+ rights are human rights, and all the recent headlines focus more on the wider societal attitudes towards the LGBT+ community, but what about in STEM? Do we still need to push to acknowledge LGBT+ contributions to the sciences?

Earlier this year Karim Boustani highlighted many issues about LGBT+ diversity in STEM and there are obvious steps we can take to improve the collective working environment and improve the STEM experience for our LGBT+ colleagues. Reports say more than 40% of LGBT+ people in STEM are not out at work – which raises the question why? One answer may simply be that they do not feel the need to talk about something so personal at work. Or perhaps this 40% do not feel comfortable revealing their sexuality for fear of repercussions, in which case making our workplaces feel more accepting and inclusive is key. This can be particularly tricky in STEM, with experiments, data analysis, paper writing all needing to be done by yesterday, it can leave people stony-faced as they rush around unable to really acknowledge those around them.

But this is not to say all science is the same. I did my PhD in the overlap between respiratory and rheumatology, where steps could be made to better inclusivity of scientists from a minority background. Moving to the National Heart and Lung Institute (NHLI), I started working in the HIV field. As a scientific community, I was blown away by how progressive it was. Conference sessions would not only be led by LGBT+ scientists, but also scientists of every colour and gender identity, and this felt actively encouraged. Patient advocacy groups were always present, making sure their voices were heard and pushing the field to represent them. In doing so, scientists began to reflect on the people they worked to help. Given that HIV traditionally disproportionately affects people from minority backgrounds, and the huge contribution these advocacy groups have made in driving the scientific work being conducted, this is probably an extreme example to compare all other fields to. In saying this, I feel it is a field that a lot of lessons can be taken from by the rest of the scientific world. 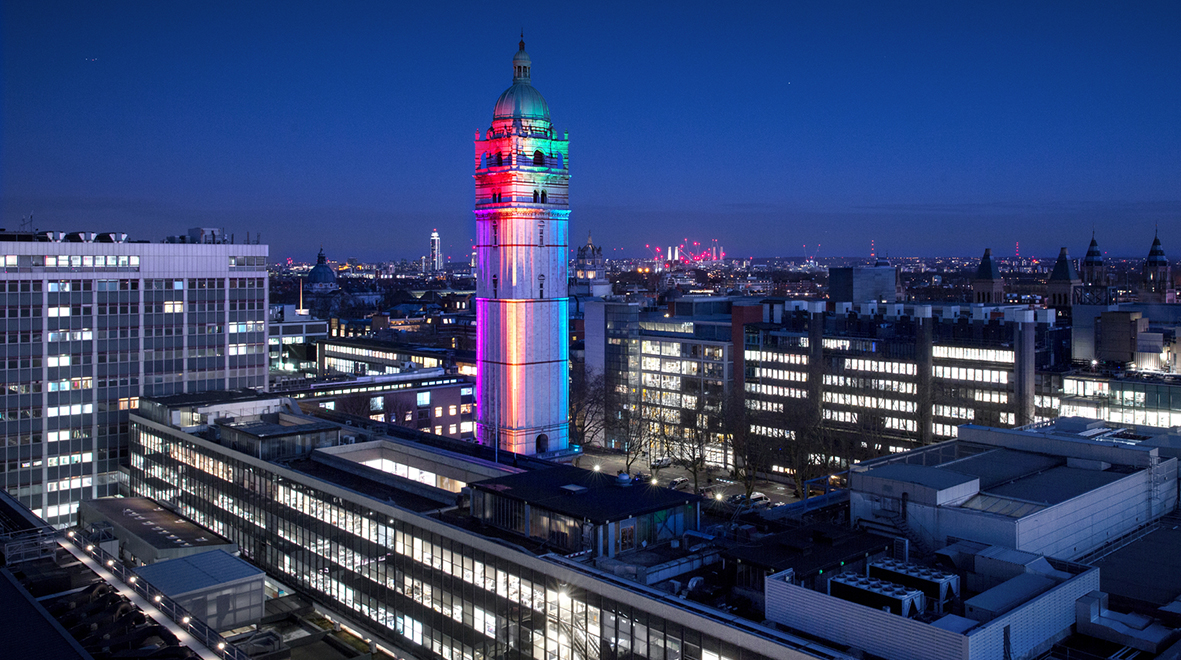 The little things can have the biggest impact

Inevitably we’ve reached the preachy part – what can you do to help? For complex reasons, we have found ourselves in a situation where LGBT+ (and all other minority) STEM staff may feel disengaged and underrepresented in the workplace. Increasing representation at the more senior levels will help engagement and retention at the lower levels, because let’s face it, a message is always easier to take on board when it is coming from someone we can relate to. Whilst this is obviously something that has to be addressed at all institutional levels, we can also help at an individual and Departmental level. At Imperial, an easy way to show support and solidarity is by wearing a rainbow lanyard (and let’s face it, they’re nicer than the standard single colour ones!). Imperial 600 (our LGBTQ+ staff network) organises regular events open to all members – LGBT+ or ally – so turning up, learning something new and meeting new people is another easy way to try to create a more inclusive environment in science.

Finally, asking that person you smile at in the corridor if they want to join when you go for after work drinks is a small gesture, but would do wonders for fostering inter-group relations. This last point transcends the LGBT+ community inclusiveness and is applicable to all, whether from a minority or not. Unconscious ‘academic tribalism’ is relatively common. We’ve all been there right? At the closing ‘networking session’ of a symposia where all work groups huddle together chatting with little interaction with others. I would say to consider who you include (and inadvertently exclude) in group activities and the implications on the workplace environment. Whilst all these are things that happen at the lowest levels of the College, everything starts with a small step. By creating a more inclusive and friendly working environment at the ground level, we’ll be in a better position to start making changes at the levels above us. Having seen things that work well within the HIV research community, I would love to see the same sort of community-feel across all of STEM.

As minorities, I believe we should support one another as allies. Whilst I’ve only really touched upon LGBT+ in STEM, pushing the visibility of female or BAME scientists helps with LGBT+ visibility too. In reality, no one really belongs to one community. Each of our identities is composed of a mixture of several communities, so I would go as far as to say that when one group wins, we all win. Supporting the work of Pride in STEM or Imperial 600 (or Athena Swan or BAME focused initiatives) may not seem like much, but collectively it is a movement that can change the tide and leave all members of the STEM family happy and feeling supported in the workplace.

Dr Akif Khawaja (@Ak1fK) a postdoctoral research associate in the Molecular Medicine section of the National Heart and Lung Institute.

On a lighter note, did someone ask what’s going on? Imperial College London is hosting an event in collaboration with Pride in STEM, Imperial 600 and Digital Science on Friday 5 July. The line-up of fabulous LGBT+ scientists ranges from Imperial Mathematician Dr Sabine Boegli to Pride in STEM founder and astrophysicist Dr Alfredo Carpinetti – so why not come along and enjoy the celebrations of science on the eve of pride and have a fun (and inclusive) pride month!