From gluten-free to detox diets, Dr Anusha Seneviratne dissects the scientific evidence (or lack of) behind eccentric diets.

Magazines and newspapers are full of so-called ‘tips’ or ‘advice’ for the image conscious, detailing extreme diets followed by the rich and famous to achieve dramatic weight loss, or new diets apparently supported by the latest scientific research. One example is the gluten-free diet, made fashionable particularly in the sporting world by former world number one tennis player Novak Djokovic (1). Having had a reputation for being physically weaker than his rivals, Djokovic was eventually diagnosed with coeliac disease and the resulting gluten intolerance. Eliminating gluten from his diet transformed his career.

Many have since adopted the gluten-free diet with the hope of boosting their own energy levels, but have had mixed results. Recent studies show that being ‘gluten-intolerant’ is hardly a medical condition that can be diagnosed and scientists have struggled to establish a mechanism for supposed gluten intolerance. So unless you suffer from coeliac disease triggered by gluten, following a gluten-free diet could do more harm than good, as gluten-free foods are often low in fibre and key nutrients, and high in sugar. 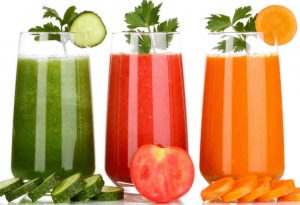 The gluten-free diet is just one of many fad diets that benefit significantly from media hype. A completely sugar-free diet has been suggested to stop ageing, but it cannot be realistically achieved unless one only eats meat – which in itself is not very healthy. The Voice of Young Science network (including myself) teamed up to look for evidence behind over a dozen eccentric diets. In a society where we never seem to have time to eat, many rely on nutrient rich foods such as milkshakes or cereal bars as a substitute for meals, but our bodies have different nutritional needs at different times, while eating the same food all the time can cause depression. Detox diets claim to cleanse our bodies of harmful toxins, but there is no need for this, your liver and kidney already do this job and it will only harm your wallet!

With the Voice of Young Science network I specifically investigated whether keeping yourself cold (but not shivering) can help you lose weight (2). There is some evidence to suggest that exposing yourself to colder temperatures such as in open water swimming, can result in weight loss. When the body encounters lower temperatures, the nervous system triggers the breakdown of fat stores known as white adipose tissue while increasing the presence of ‘brown’ adipose fats linked to obesity resistance. However, studies have also linked cardiovascular disease to cold temperatures due to the fat breakdown increasing ‘bad’ cholesterol levels in the blood. This can accelerate the build-up of fatty plaques clogging the arteries, known as atherosclerosis, increasing the risk of heart attacks and strokes. Thus, following the ‘cold diet’ is a dangerous measure.

Atherosclerosis is the focus of my research at Imperial College London. The development of this disease is a long process that can take decades, and involves the build-up of fatty particles and immune cells in the wall of the artery. The fatty particles are called low density lipoproteins (LDL) and are also known as ‘bad cholesterol’. This build-up eventually leads to blockage of the artery by the atherosclerotic plaque or, the plaque ruptures triggering the formation of a blood clot. Blockage of the artery by either the plaque or a blood clot can lead to a heart attack or stroke, the leading cause of death in the world.

As you’ve probably guessed, a high amount of fat in your diet is a major trigger of atherosclerosis. Red meat is particularly bad in this respect; with a high content of LDL. Red meat also contains a chemical called L-carnitine, which prevents the expulsion of excess cholesterol by gut cells, thus increasing circulating cholesterol levels (3). You won’t be surprised to hear that eating too much sugar is also not great for your health or your heart. Excess sugar consumption can increase inflammation throughout the body and as a consequence promote immune cell entry into the artery. It also appears that circulating LDL levels in diabetic patients are increased compared to healthy people, suggesting that cholesterol and glucose could work together to accelerate atherosclerosis. 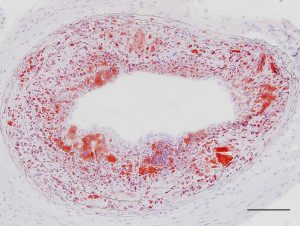 In contrast, eating plenty of fruit and vegetables can increase your ‘good cholesterol’ or high density lipoproteins (HDL), which has been shown to reduce the entry of immune cells into the artery wall while promoting the breakdown of cholesterol helping to reduce the size of arterial plaques.

While we already have a great deal of knowledge on what your diet can do to your cardiovascular health, there are still many unanswered questions. For example, we don’t know the exact mechanisms of how LDL can influence the behaviour of the main type of immune cell that enters the artery wall, called macrophages. We know that macrophages enter the artery wall to clear away the deposited fat particles. However, they contribute to the problem of blocked arteries by dying and depositing in the artery wall, but we are not sure of exactly why this happens. Research into this area is vital to improve our knowledge on the influence of diet and therapies on atherosclerosis and cardiovascular disease.