It is the season of giving, so we look at how kidney donations from strangers are giving kidney disease patients a second chance at life.

As far as generous Christmas presents go, donating your kidney seems for many at the extreme end. However, for a few lucky kidney disease patients, this is the gift of a lifetime. Known as unspecified or non-directed altruistic kidney donation, this form of live organ donation is on the rise, and could potentially wipe the waiting list if more stepped forward. I met Frank Dor, a consultant transplant surgeon and Head of Transplantation at Imperial College Healthcare NHS Trust, who has carried out hundreds of live organ donations.

Frank receives a phone call notifying him that a kidney from a deceased donor has been allocated to one of the recipients at Imperial. This single kidney is in high-demand as there are around 5,000 people on the UK NHS Blood and Transplant (NHSBT) waiting list for a kidney; some waiting for up to five years. Unfortunately, a few hundred of these will die in the meantime for lack of one.

These patients have chronic kidney disease, meaning they have lost their kidney function so dialysis three times per week becomes the norm. However, life on dialysis is debilitating, difficult and time-consuming. “Dialysis is merely a way of keeping people alive, it’s just a temporary measure that can never fully replace the kidney function,” Frank tells me. “Eventually patients on the waiting list get to a point where they start to lose hope and stop making plans for the future”.

The long-term solution is receiving a kidney transplantation, of which there are two types – living and deceased. Transplantation provides patients with the opportunity for a longer and better quality of life, with patients typically gaining 10-20 years of life compared to dialysis. However, the odds for receiving one are not favourable: there are 1,500 patients on dialysis in Imperial College Healthcare NHS Trust but only around 200 of those get transplanted every year. There is a huge gap between supply and demand nationally and internationally.

Although the number is slowly rising, there are not enough people registered to be deceased donors. Frank highlights the importance of the opt-out system – currently debated in England – which is associated with higher rates of registered organ donors in other European countries. If organ donation was the default option it would result in a culture change. Compounding this is the fact that not every single organ from a deceased donor is suitable. In fact, each year only one in 15,000 people die in such a way that they can be an organ donor, and even then, the organs might not all be suitable for a number of reasons.

The beauty of live donation

“You don’t need two kidneys, so why not give one to someone who needs it?” The kidney is one of the few organs you can donate whilst you’re alive. The Nobel prize-winning procedure was first performed in 1954 and the surgery has improved enormously over the years thanks to modern operative techniques. It used to be a big operation with a huge incision, and rib resections. It’s now a minimally-invasive operation – often using the keyhole technique – that is being performed around 1000 times per year in the UK.

One of Frank’s biggest passion is avoiding dialysis for his patients, and this is possible with live donors and a little careful planning of the transplantation. “In these so-called pre-emptive live donor kidney transplantations, even better results are obtained in terms of patient and graft survival, and even incidence of rejection. Clearly, we need to work much harder to ensure that every patient gets the opportunity to find a live kidney donor. Secondly, to identify this live kidney donor early enough to be able to finish the work up before the patient needs the transplant so that the majority of patients will receive a pre-emptive transplant. This should be the default. In the old default thinking, people would be dialysed and then be waitlisted for transplantation, which is clearly not the best way forward for most patients”, explains Frank.

A new wave of live donation that is on the rise is unspecified or non-directed altruistic kidney donation – giving up your kidney anonymously to a complete stranger – without any direct benefit. Typically, we associate live donation with a donor giving up a kidney to a family member or friend; specified or directed kidney donation. When a person makes this personal sacrifice because of a family member there will be a bit more self-benefit for the donor, as they will get a much healthier loved one back after the transplant.

Every year, in the UK, a few hundred altruistic donors come forward that feel compelled to donate a body part to a recipient they may never learn anything about. This is a trend Frank strongly welcomes because if the numbers continue to rise at the same rate as previous years, it could potentially wipe the waiting list. This could lead to a ripple effect where one altruistic donor can set off a whole chain of transplants. So, one altruistic donation typically helps multiple people with incompatible live kidney donors that can be swapped in a national exchange system, as well as a person on the deceased donor waitlist that does not have a live kidney donor.

The idea of giving an organ away altruistically is something that divides people and until 2006 it was actually illegal in the UK. Frank puts it down to the fact that this ultimate form of ‘do-gooding’ is a gesture that most can’t comprehend and some have even labelled this type of behaviour as crazy.

But what exactly motivates exceptional altruist? “I’ve met hundreds in the UK and in the Netherlands, and each one has an individual story. One thing that they have in common is that their life is full of charity, doing good and often already donors of blood or bone marrow. Often, they’ve had someone in their life with kidney disease or chronic disease and this is their way of paying back the NHS” Frank says, “and I don’t think that is crazy at all”. 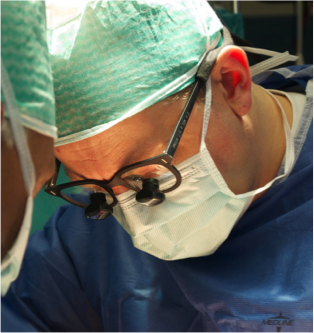 Any adult in good health and with two kidneys can make this sacrifice. However, it’s not a decision to be taken lightly, warns Frank, and “probably not suitable for the squeamish”.Over a period of months, the donor is put through a plethora of medical tests, X-rays, scans (to ensure that the donor can live a healthy life with one kidney), ultimately culminating in an operation, that is actually very safe.

The operation provides no personal benefit – only risks (albeit very low) – to the donor so Frank feels a massive responsibility when operating on altruistic donors: “They learn about the risks involved, but it doesn’t deter them. Most of them already decided long before that they want to do it.”

Non-directed altruistic donors are still quite rare compared to directed altruistic kidney donations, making up around 9% of all live kidney donors. For the most part, the onus is on the kidney patients to find a suitable donor from their social circle. This can be a challenge for some of Frank’s patients who live in one of the most diverse areas of the country: “So many different ethnicities, religions, countries, views to life and body integrity are represented amongst my patient cohort.” This brings its own set of challenges, as some patients are reluctant to talk about life matters, such as organ donation, with their peers. “It requires a very individualistic tailor-made approach preferably in people’s native language, and with an understanding of the culture.”

Patients are often too afraid of asking someone in their social circle whether they would be willing to donate a kidney. Understandably so. “It’s not just a pint of milk from your neighbour, you’re asking an individual to be put through multiple tests, screens and an operation to remove an organ.” But what restores Frank’s faith in humanity is that most people are willing to help when asked.

With the demand for organ donation growing worldwide, some of Frank’s patients are looking in unlikely places for their kidneys. Public solicitation for organs offers an opportunity to find a living donor for potential recipients who do not have one within their social or family network. For example, in the US, Facebook offers members the ability to identify themselves as organ donors on their Facebook pages and patients can search for these donors and contact them.

Franks has written extensively on the topic of public solicitation and doesn’t think in principle there is anything unethical about it. Whilst there are clear guidelines for this in the UK, Frank has noticed that patients who engage in this activity are often not well prepared for the consequences and often not guided by a transplant professional. Namely, those who have been on the waiting list for years are frustrated and in a vulnerable position. These individuals would go extreme lengths to find a donor, such as paying for one, which is illegal (apart from in Iran), unethical and dangerous. 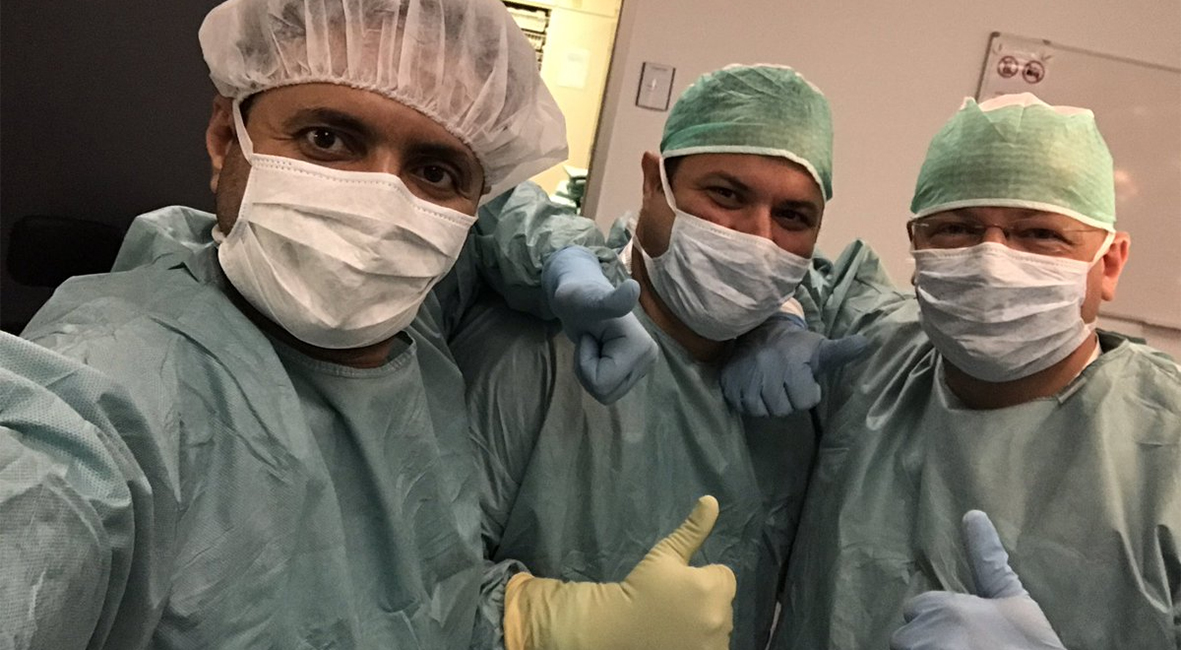 A second chance at life

Even after performing many hundreds of kidney transplants, Frank finds every single one just as rewarding; “The beauty of it is that you get to know both the donor and the recipient in live donor kidney transplantation. You find out what’s important to them, what they wish for, and what they can’t do anymore in life, especially when on dialysis.” The numerous thank you cards and gifts found in Frank’s office are a marker of his kidney donors and transplant patients’ gratitude to be given the opportunity to donate a kidney safely, or at a second chance at life.

The decision as to who gets the kidney that had just become available for an Imperial patient is out of Frank’s hands and is down to a complex algorithm managed by NHSBT based on priority, best match and proximity. However, Frank is just about to make a phone call that will make one kidney patient’s Christmas.

2 comments for “Would you give the gift of a kidney to a stranger in need?”