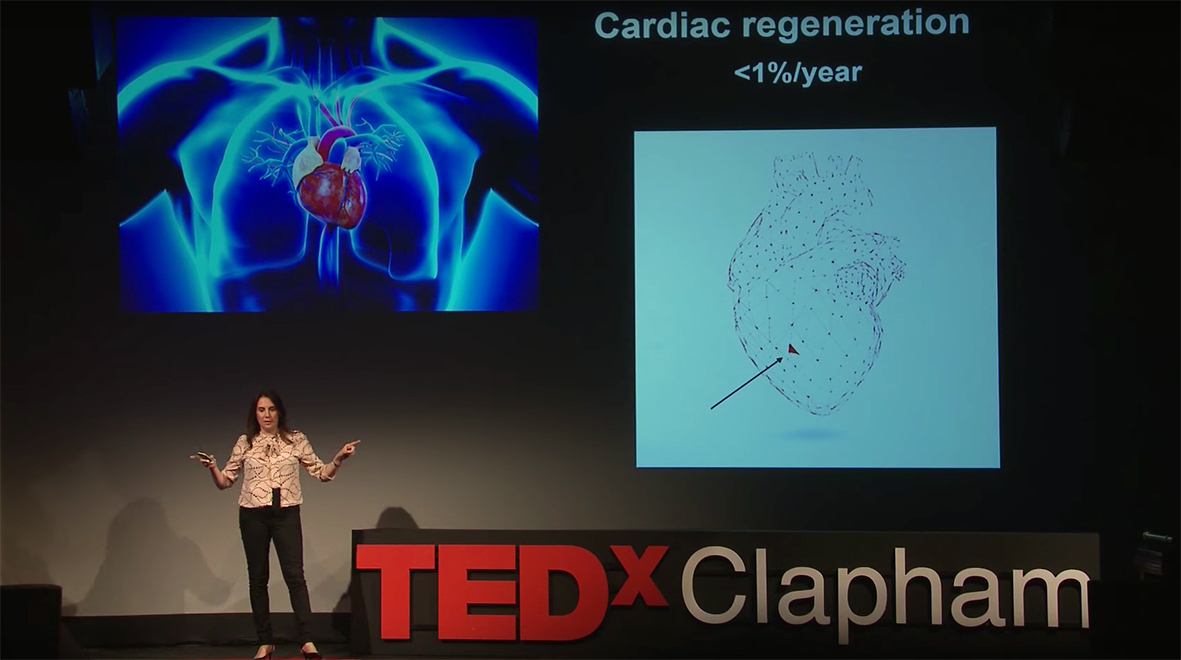 Dr Michela Noseda took cardiac cells to the stage at her recent TEDx talk on how scientific approaches she uses can help us understand how to beat one of the biggest killers of our time – heart attacks.

Heart attack (myocardial infarction) remains the foremost killer worldwide. The prevalence remains high despite the fact that we have been reducing risk factors; stopping smoking, eating a healthy diet and exercising. In fact, the persistence of myocardial infarction as the most frequent cause of death is related to an ageing population and the move of people towards big cities.

What happens during a heart attack?

A coronary artery – a blood vessel of the heart –  gets blocked and the blood flow to the cardiac tissue is reduced or interrupted resulting in the death of the cardiac muscle cells, also known as cardiomyocytes. The loss of cardiac muscle cells is the crux since these are the functional blocks of the cardiac muscle which allow it to perform its blood-pumping function. The introduction of reperfusion therapies that restores the blood flow to the heart as clot-busting drugs, stents and angioplasty have strongly improved the survival after a heart attack. However, these therapies cannot replace the cardiomyocytes lost as a result of the heart attack before the interventions. The survival from a heart attack at our latitudes is about 70% which is a great improvement from the pre-reperfusion era. Nevertheless, the larger the damaged area is in the surviving heart and patient, the higher the chance that the heart will eventually fail.

What is heart failure?

Heart failure is a serious condition that occurs when the heart does not pump around the body as well as it should. This has a mortality of 50% after 5 years – worse than many cancers – and costs over $100billion/year worldwide. The only definitive cure for heart failure is heart transplantation.

What are our priorities?

As scientists, the challenges ahead are to:

What is the human heart’s capacity to rebuild itself?

The regenerative capacity of the heart remains largely controversial although there is strong evidence that in a young adult only about 1% of the cardiac muscle cells are regenerated each year. Compared with skin, which regenerates completely (100%) in approximately a month, it is clear that the heart has a very limited capacity and this decreases with age when it is more likely that we will suffer from a heart attack. Thus, our aim is to identify molecular and cellular targets to boost the repair and regeneration of cardiomyocytes.

What about the other cells in the heart?

Cardiac muscle cells are our therapeutic target but the heart is not just made of muscle cells. It includes a number of additional specialized cells including the ones lining the blood vessels, structural cells called fibroblasts, as well as cells transmitting nervous system signals to the muscle cells to keep them beating in a synchronised and efficient way. We have recently identified a new subtype of cells with peculiar characteristics that we define as cardiac progenitor cells. For their identification, we used novel technologies that allow us to study the heart, one cell at the time, instead of using the standard techniques that use bulk analysis. By looking at the gene expression in every single cell, we were able to identify specialized subtypes within the original large and heterogeneous population defined by my mentor, Professor Michael Schneider. We found a new rare cell population that is highly clonogenic (can generate daughter cells from one single parent cell) and, strikingly, they can differentiate into cardiomyocytes when injected into the cardiac muscle – this means they are able to generate new cardiac muscle cells.

An additional unexpected result puzzled us

We found that injecting these cells into an injured heart resulted in functional improvement of the heart as demonstrated by MRI. This positive and important result was surprising. Most injected cells in the heart are flushed out rapidly and won’t stay for months. After three and a half months, we could detect just a few (~20-50cells) of the 500,000 injected cardiac progenitors. Of the long-lasting cells, approximately 50% differentiated into cardiomyocytes, this resulted in 10-20 newly formed cardiac muscle cells. Bearing in mind that cardiomyocytes have the length equivalent to the thickness of a human hair, it is intuitive that this microscopic amount of new cardiac muscle cells cannot be sufficient to improve the function of the heart.

How could we explain the improvement in the function of the heart after myocardial infarction?

We hypothesised that the cardiac progenitor cells injected into the myocardium release a cocktail of factors that are beneficial to the cardiac cells immediately as they are injected into the heart muscle. Therefore, to test this hypothesis of whether cardiac progenitor cells would have an immediate protective effect on cardiomyocytes, we created a heart attack in a dish. We used human induced pluripotent stem cells (hiPSCs)-derived cardiomyocytes, hit the cells with a stressor to reproduce what happens in a heart attack and we discovered that in the presence of the cocktail produced by progenitor cells, cardiac muscle cells did not die, or died much less.

What further steps can we take to use the differentiation potential of cardiac progenitors and, importantly, their protective effect on cardiac muscle cells?

To uncover the cellular sources, factors and molecular networks that can be targeted to generate new cardiac muscle cells and prevent cardiomyocytes’ cell death in the heart at the time of injury, I am using a cutting-edge approach that allows me to study the entire set of genes expressed by a single cell. This allows us to understand each studied cell’s functional status and infer its role within the cellular landscape of the heart. These technologies allow for an unprecedented level of resolution in studying the cardiac tissue.

We have overcome previous limitations of studying gene expression in a relatively large quantity of tissue (grams) or in bulk (tens and hundreds of thousands of cells at once) per donor/ patient. Now we just need the cells of interest that can be studied one at a time – from one single cell to thousands of them. This means I can pick the exact cells of interest and focus my analysis on those. I can study the prevalence of rare cell types (previously masked in the large bulk), cell heterogeneity and study co-expression on specific molecules within each cell to reconstruct functional pathways.

Michela Noseda is research fellow and group leader within the Cardiac Function Section at the National Heart and Lung Institute.

3 comments for “Building a heart, one cell at a time”