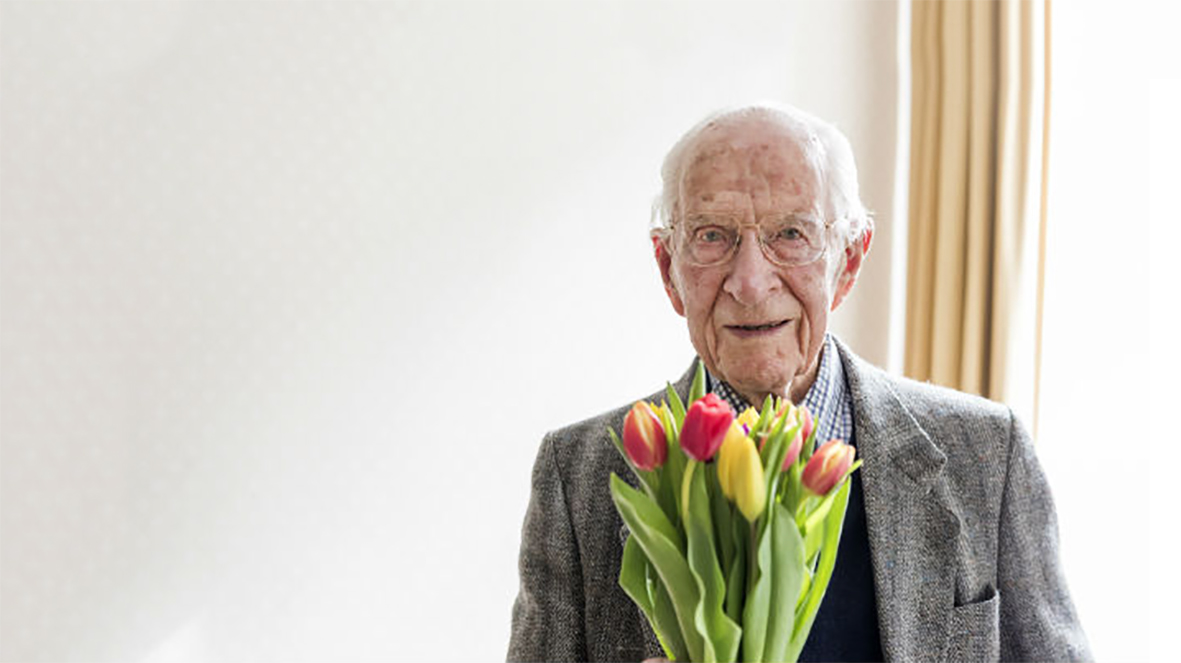 Dr William (Bill) Frankland, aged 106, has helped transform our understanding of allergies during his long career in medicine. A pioneer in the field, Dr Frankland popularised the pollen count to help clinicians and patients understand what triggers their seasonal allergies. Originally published on the Imperial College Healthcare NHS Trust blog and reproduced here with permission, he reflects on his career and working for the NHS for 70 years.

People often ask me, how is it that I’ve lived until 106. All I can say is I’ve come close to death so many times but somehow I’ve always managed to miss it and that’s why I’m still here.

I was born in 1912, six weeks early. My identical twin brother and I weighed three pounds one ounce each but we both survived – he died in 1995, at age 83. As an early baby, that’s the first time I survived against the odds.

I first encountered hay fever when I was a child. I grew up in the Lake District where my brother and I spent our summers helping a local farmer with his hay. One day, I told my brother my eyes were itchy and I couldn’t go on. “You’re feeble,” he said. It took me 30 years before I realised I had a real problem with summer hay fever and about 90 years to grow out of that allergy.

I saw the whole of medicine change with the development of antibiotics. When I was a medical student in the 1930s, my classmates and I had the opportunity to visit Queen Charlotte’s Hospital to see women who, following childbirth, had developed infected puerperal sepsis – a bacterial infection in the uterus and surrounding tissue – which had a very high mortality rate. They were treated with the sulfonamide drug prontosil rubrum, the first sulfonamide ever used in the UK. Drugs like that worked magic on many infections – but not all. Then when penicillin came along, it was the wonder drug that made many more infections treatable.

My life was saved for the second time during the war – all thanks to the flip of a coin. I was stationed in Singapore during World War II, and another doctor and I decided to spin a coin to determine our assignments. I called heads and won. The man who lost went to Queen Alexandra Hospital where he was brutally murdered by Japanese forces in 1942. I was spared that attack but was later held as a prisoner of war on what’s now known as Sentosa Island – incidentally, where the US-North Korea summit was recently held.

When I returned to the UK after the war was over, I decided I’d become a dermatology consultant. But I soon realised it didn’t interest me and, at the time, it wasn’t a full time job. A notice went up on the door of the allergy department saying they wanted a doctor two mornings a week so I joined and liked it so much that after six weeks, I asked to work there full time. Luckily, Dr Freeman, the head of the department, said yes! I’ve been an allergist ever since.

I remember how pre-1948 many consultants were against the launch of the National Health Service. They had a roster of private patients and were concerned they would lose out on income. But they needn’t have worried– they got paid through the NHS and their private patients came to see them just the same.

I worked under Sir Alexander Fleming for a time. Fleming died in 1955 and in the last two years of his life I took over his medical ward. Every morning for two years I had to go and see him at 10am. We were meant to discuss patients but we talked about everything else. Fleming qualified as a surgeon, but he just wasn’t interested in clinical medicine – once he looked down a microscope, he continued looking down a microscope!

Fleming supported my research while I worked for him which led to one of my proudest moments. At the time, it was thought that autologous bacterial vaccines – vaccines made from an individual’s own throat bacteria – could treat certain types of so-called infected asthma. I thought it was all ballyhoo, so I went to Fleming and said I wanted to do a double-blind placebo controlled trial to test their effectiveness. He gave me the go-ahead to do it although it was very expensive due to the high costs involved in producing autologous vaccines. The placebo injections gave exactly the same result as the very expensive ones. I was afraid my chief might sack me! After that study was published I was invited to lecture on it all over the world and at the time I was a junior doctor, not a consultant. I’m still very proud of that.

One February, the tropical insect I’d allowed to bite me triggered anaphylactic shock. I had just enough time to tell the sister how much adrenaline to give me before I lost consciousness. After a two hours and another dose of adrenaline, I pulled myself together and went off to see a patient, forgetting that my face was still swollen from the reaction! On the whole, I felt fine – that is, until I encountered a nurse and a student trying to push her car up a steep icy ramp out of the car park in the intense cold. I decided and we rolled her car to the road but my anaphylactic reaction returned. The exertion of pushing that car paired with the cold had triggered a delayed allergic reaction. There was very little research on delayed allergic reactions at the time and the experience inspired me to do more research on the subject, which I eventually published.

Of course, most people who know my name know me because of the pollen count. My patients were not particularly reliable in reporting the date of the start of their allergic reactions – one woman in particular insisted she was allergic to roses, though they produce no air-borne pollen! I set up a pollen trap at St Mary’s Hospital, on the roof of what used to be the nurses’ accommodation – now called Salton House – to identify different types of pollen in the air. From that work, I created a pollen count system and tracked pollen counts every day with my team to help determine what triggered my patients’ allergic reactions. We thought other people might find it useful, so we suggested two newspapers publish the count each day. We found ourselves making a call to the papers each morning to report the pollen count! Today the pollen count appears on the radio, on television and in newspapers with the weather forecast.

Desensitisation treatments can help patients with severe allergies but towns and cities can take additional steps, as well. Here’s a good example: many people want our cities to be greener, so trees are being planted all over London. Many of those trees are silver birch which is a strong sensitiser – people become very sensitive to their pollen over time. There’s an easy solution that doesn’t require giving up on greenery: plant female silver birches, which don’t produce any pollen and are therefore non-allergenic. I’ve been trying to get this message out for years!

The nicest thing that’s ever happened to me – aside from the day my late wife accepted my marriage proposal – was when I became an honorary fellow honorary fellow of my college, the Queen’s College, at Oxford. I was delighted with that honour and it gives me the opportunity to attend some lovely events from time to time.

I’m very proud to have been part of the story of the National Health Service and am delighted to see its 70th year. I still try to fly the flag for allergy whenever possible and clinicians continue to call me for advice and guidance. I also keep up with the latest research in allergy – my most recent paper was published in March 2017. You may also find my face in your nearest bookstore soon as my biography is due to be published later this summer. I find that I have plenty to keep me busy these days!

Dr William Frankland is a graduate of The Queen’s College, Oxford and St Mary’s Hospital Medical School (now part of Imperial College London), Dr Frankland was a founder and president of what’s now known as the British Society for Allergy and Clinical Immunology and vice president of the International Association of Aerobiology. He is president of the Anaphylaxis Campaign and, in 2015, was awarded an MBE for services to allergy research.  He also published a number of notable papers, including the findings of a study of vaccines used in the treatment of asthma, which was published when he was just a junior registrar.