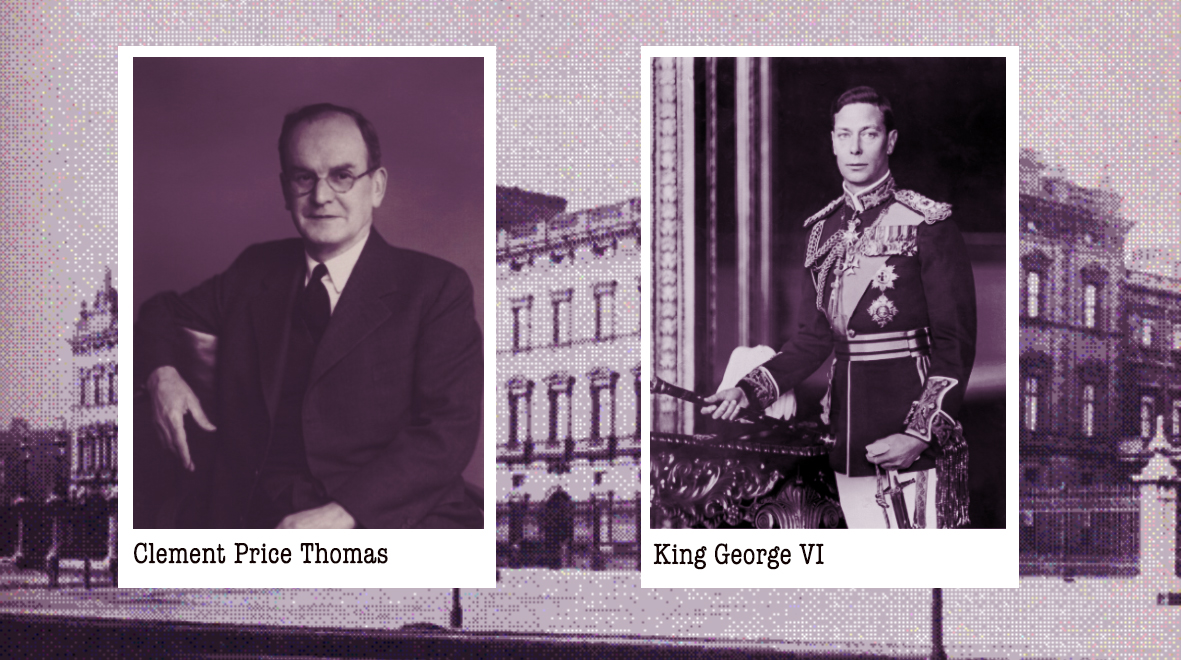 Westminster Medical School – one of the schools that formed Imperial College School of Medicine – has been home to many pioneers. But few can claim a connection to royalty.

Sir Clement Price Thomas, student and surgeon at Westminster and one of the fathers of thoracic surgery, rose to fame after an operation on King George VI. Read on to learn just how challenging this procedure would have been.

The reign of George VI was a turbulent time for the monarchy. At the end of a brutal world war and the dissolution of the largest empire the world has ever seen, the King’s health took a turn for the worse.

Because of the King’s chest problems, Sir John Weir, the Royal Family’s doctor, called in a lung disease expert, Geoffrey Marshall, and chest expert, Sir Robert Arthur Young. After X-rays and a bronchoscopy revealed a malignant tumour in his left lung, the King’s physicians set to work organising a secret operation. They all agreed that Clement Price Thomas was the best surgeon for the job.

Setting up the makeshift theatre

The operation was planned for 22 September 1951 at Buckingham Palace. But the Buhl room clearly wasn’t designed for major surgery, despite the equipment brought in for the occasion. With the stakes so high, Price Thomas demanded that the palace install emergency lighting in the room. The palace agreed – and even moved the changing of the guard to St James’s Palace to make sure the surgical team were not disturbed by the noise outside.

On Sunday 23 September 1951, the room was ready and Price Thomas, his two surgical registrars and his scrub team set to work.

It’s hard to imagine the pressure Price Thomas must have been under. Not only was he operating on such an important person, he was working in unfamiliar surroundings and performing an operation that was far more dangerous than we can imagine today.

At the time, X-rays were rudimentary at best. Today’s medical experts can see in advance exactly where the problem is, and perform very precise keyhole surgery – at the Royal Brompton Hospital, for example, lung cancer surgery involves a single 3cm incision. The goal is to remove the whole tumour while saving and reconstructing as much of the lung as possible. Price Thomas’s only option was to fully open up the chest, probably with a 25cm thorachotomy, and examine the tumour with his own eyes before deciding to remove the entire lung.

Despite it being such a challenging operation, Price Thomas’s famously steady hands made sure it was a success. The registrars stayed with the King overnight to monitor him. He was kept under sedation and given only water and juice for the first few days of his recovery, slowly transitioning onto a soft diet including soft boiled eggs and steamed fish.

After the King was well on the way to recovery, the palace announced more details of the surgery to the press. Price Thomas was reported to have claimed: ‘The King is the best patient I ever had. Not only is he brave, but he is full of humour. And he is just like an ordinary individual to deal with.’

As a speciality, thoracic surgery was in its infancy in the 50s. In fact, if the King had been diagnosed just a few decades earlier, his only option may have been palliative care. Clement Price Thomas was one of the early pioneers of the field – it wasn’t long ago that surgeons were more general, focusing on both heart and lung rather than pure thoracic surgery. Even in Price Thomas’s time, thoracic surgery was mostly used as a treatment for tuberculosis, but the well-respected surgeon helped lead the way towards treating lung cancer.

In fact, modern surgeons have a visible reminder of his impact on the field – the Price Thomas retractor is a device that still sees use in hospitals for open operations.

As well as his KCVO, Price Thomas received widespread recognition throughout his career – honorary degrees from Wales, Belfast, Paris, Lisbon, Athens and Karachi, and the presidency of the British Medical Association, the Royal Society of Medicine, the Association of Thoracic Surgeons, the Thoracic Society and the Welsh National School of Medicine. He was also a vice-president of the Royal College of Surgeons and a fellow of the Royal College of Physicians. Westminster was always a major part of his career, but he also held positions at the Brompton Hospital, in the armed forces and even as an adviser to the Ministry of Health.

The operation recently featured as part of The Crown television show. The documentary makers created a realistic body and a historically accurate makeshift theatre and the actors in the scene were real surgeons brought in from Guy’s Hospital.

Unfortunately, Clement Price Thomas’s chain-smoking habit eventually caught up with him and he had an operation for lung cancer, performed by one of his assistants from his work on the King. After a long and successful career, he died in 1973, 79 years old. He’ll be remembered at Imperial for a long time yet.

Do you have any memories of Sir Clement Price Thomas while studying or working at Westminster Hospital? Leave a comment below.