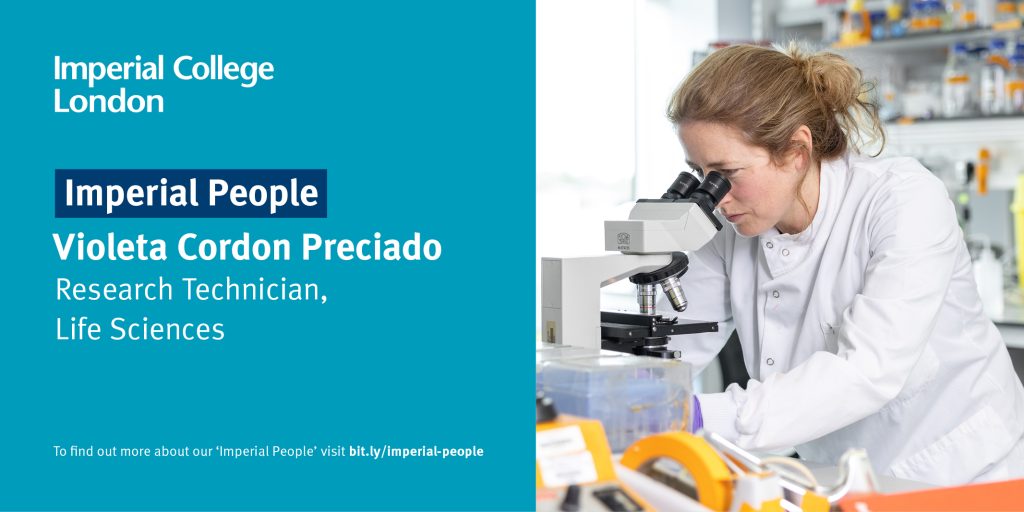 I am a molecular biologist and the Research Technician for the newly stablished Molecular Evolution Lab. Our group is studying the origin and evolution of photosynthesis using cyanobacteria as a model system. Cyanobacteria are carbon-fixing oxygen-releasing microorganisms of major ecological impact. They played a significant role in Earth’s history by enabling the rise of oxygen in the atmosphere and the appearance of more complex life.

My project aims to better understand the dynamics of genome evolution in diverse cyanobacteria. We have planned a long-term evolutionary experiment in which we aim to gather experimental data of the speed and process of their evolution under stable lab conditions. For this, four species of cyanobacteria will be grown under constant light and growth conditions and their genomes analysed using next generation sequencing techniques.

END_OF_DOCUMENT_TOKEN_TO_BE_REPLACED 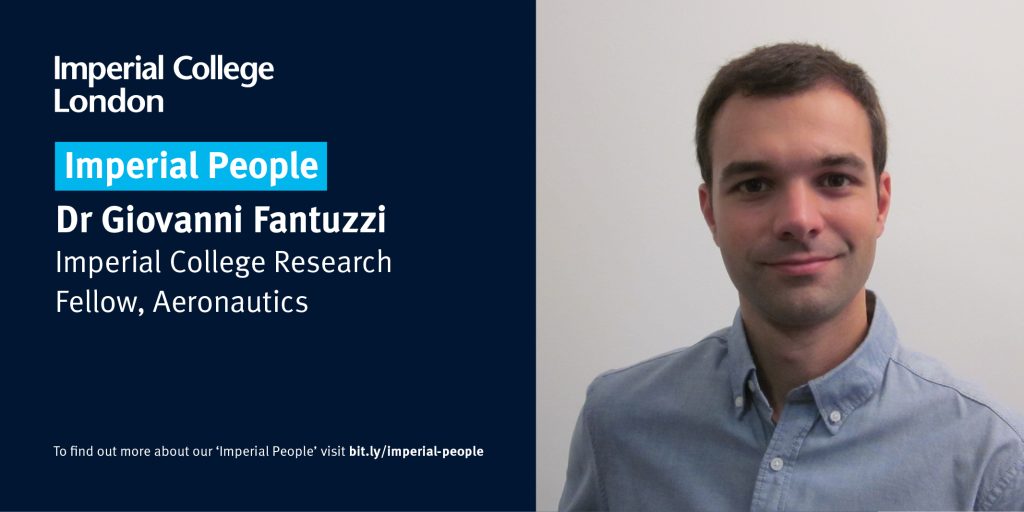 I joined Imperial as an undergraduate back in 2010 to study Aeronautical Engineering. I found myself so much at home that after graduating I decided to stay, first as a PhD student and now as an Imperial College Research Fellow.

My work explores new ways in which optimisation – the science of doing things as well as possible – can help engineers design technology that performs at its best, and is robust to changes in its operating environment. This is key to making industries such as energy and transport sustainable.

To meet this ambitious goal, one must be able to answer questions like, “How much energy can a wind turbine generate?” or “In which conditions does it operate safely?”. High-fidelity computer simulations and machine learning methods can only provide partial answers because, for engineering systems of such complexity, the number of scenarios that one can simulate accurately and use to train artificial intelligence is typically very limited.

END_OF_DOCUMENT_TOKEN_TO_BE_REPLACED 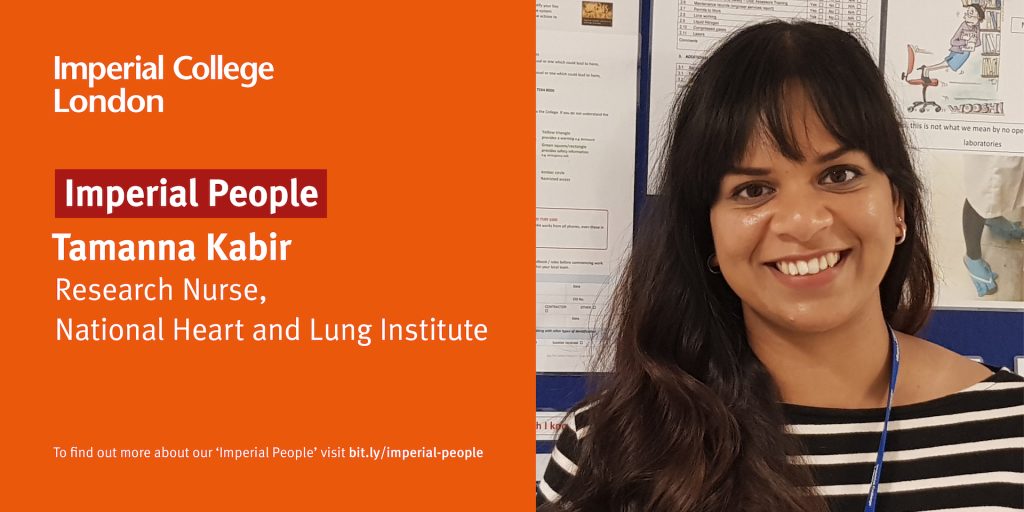 I’m a Research Nurse at the National Heart and Lung Institute, currently working with firefighters all day!

My journey here was a bit like crossing a bridge and tunnel to reach the same destination. Intrigued by human behaviour, I completed a psychology degree but couldn’t see myself adopting its indirect approach. I then worked in charities and enjoyed building more therapeutic relationships with people, so trained as a nurse. I rarely saw people like me in either field. But when I discovered nurses could be researchers, I suddenly thought – why not me?

I’m now part of the Grenfell Firefighters Study team, examining the physical health outcomes of almost 800 London firefighters who attended the Grenfell Tower fire. It’s undoubtedly a sensitive topic which I’m fortunate to gain insight into. I support firefighters to take part in the study, perform heart/lung function assessments and blood tests, then discuss their results. In the future, we’ll monitor medium and long-term health outcomes by reviewing their health records.

END_OF_DOCUMENT_TOKEN_TO_BE_REPLACED 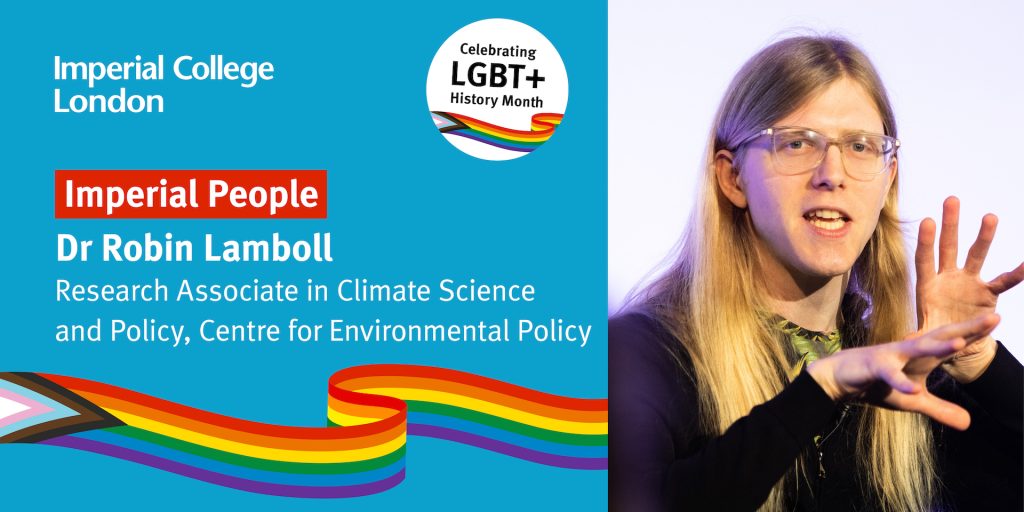 After doing my undergraduate course in Natural Sciences, I continued at the University of Cambridge to get a PhD in the physics of solar cells. I enjoyed being a student, but not particularly my actual research, so I left academia for two years to work as a consultant to pay off my student loan before becoming a more interdisciplinary scientist, working on climate change.

Currently I do a variety of programming and statistical analyses on emissions data, for instance working out relationships between different types of air pollution. People often want to think only about carbon dioxide emissions, but the other gases we emit can make a big difference too.

I calculate the amount of carbon we can afford to produce while still staying below certain temperature limits for the Intergovernmental Panel on Climate Change (IPCC) – something that has to take account of these other gases and also contribute to estimating the impact of recent climate pledges in the UNEP emissions gap report. You may have read in the news when we updated our conclusion during COP26 to show that if all governments stick to their promises and long-term goals, we might see less than 2C warming. It’s a significant progress milestone, though there’s still a lot of work to do.

END_OF_DOCUMENT_TOKEN_TO_BE_REPLACED 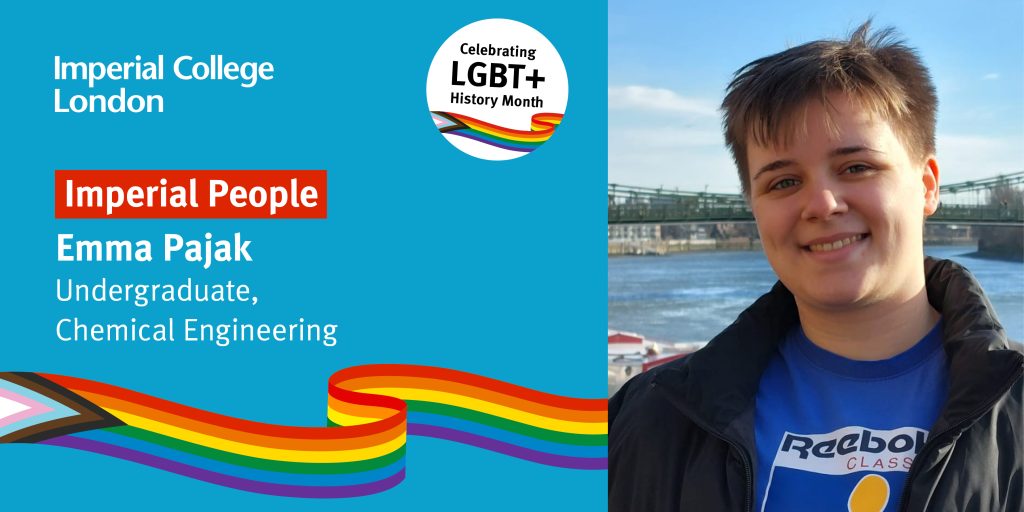 Being an openly gay woman in engineering, I am passionate about representation. A phrase that sits with me is, ‘you can’t be it if you can’t see it’. I feel it is important, for those who feel comfortable doing so to share experiences and support those around us. I hope sharing my experience might inspire others to take pride in their identity.

When I was applying to university, I was really keen to base my decision on where I wanted to apply on a logical, methodical thought process – criteria like great facilities. I decided to attend an open day here at Imperial and, whilst it ticked off a lot of these criteria, it was the overall vibe and atmosphere that hit almost instantaneously – I knew I could see myself studying here. Fast forward to now, and I’m in my third year studying Chemical Engineering here at Imperial.

END_OF_DOCUMENT_TOKEN_TO_BE_REPLACED 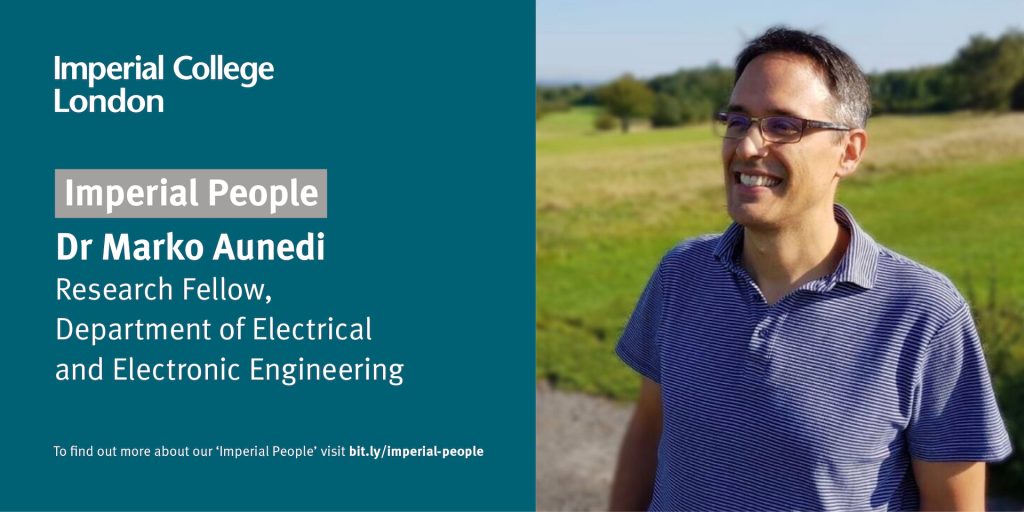 “One focus of my work projects us into the near future where smart appliances help us look after the climate.”

After completing my degree and Master’s in Croatia, where I grew up, I arrived at Imperial to start my long-desired PhD. My research focuses on how best to integrate technologies with a low carbon footprint into the electricity network.

The jury is still out on what mix of energy technologies we will need to deliver affordable low-carbon energy. Should we get our electricity by building more nuclear plants, or from renewables, such as offshore wind turbines, supported by energy storage? Should we heat our homes using electricity, hydrogen or something else? How and when should we charge the batteries of our electric vehicles?

One focus of my work projects us into the near future where smart appliances help us look after the climate. For example, smart fridges, dishwashers and washing machines could switch themselves on at night when energy demand tends to be low. This would enable more low-carbon electricity generators such as wind turbines to be plugged into the network. Due to their variable output, this is currently hard to do when half the country puts the kettle on at 1700.

END_OF_DOCUMENT_TOKEN_TO_BE_REPLACED 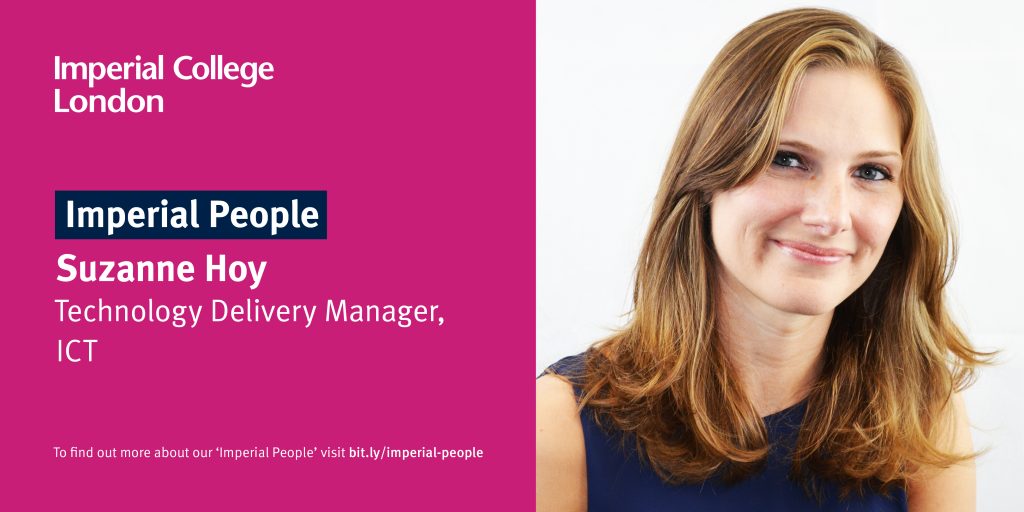 I currently work as a Technology Delivery Manager in ICT having previously worked in the external events team. I never saw myself working in ICT as I thought it was too technical, however I have surprised myself with how much of a geek I am! I love learning about how things work “behind the scenes” and seeing that transposed on a client facing system. I now work with staff across the College on projects which improve student administration and experience.

I am currently studying a degree apprenticeship in Project Management to further my knowledge on areas I have had little exposure to thus far. I’m formalising my current work experience into a recognised qualification as part of my career development.

So far, the degree has not only provided taught content, but a network of colleagues from different industries who offer insights into project control and management in other workplaces. It has also provided a great support network as deadlines loom and panic sets in!  END_OF_DOCUMENT_TOKEN_TO_BE_REPLACED 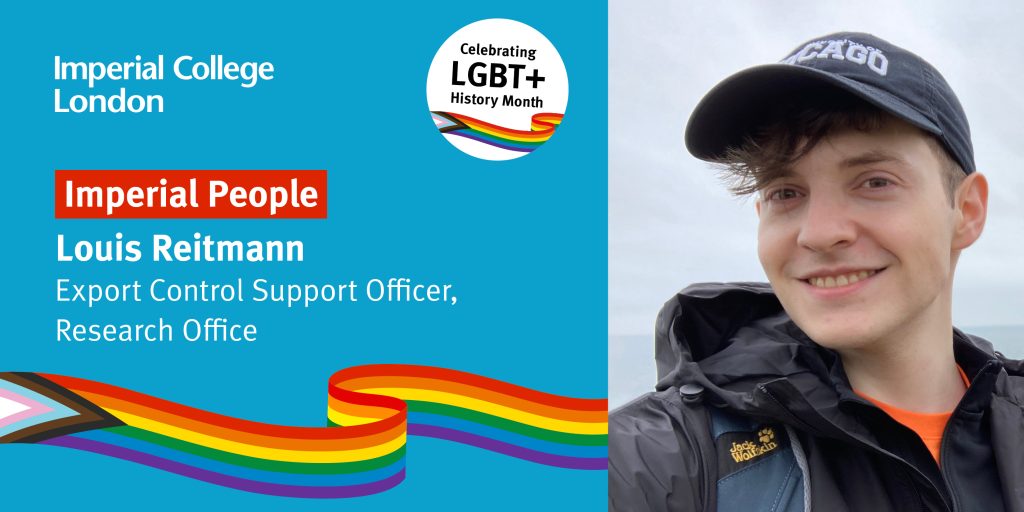 “With so much LGBT+ visibility on campus, I felt empowered to be true to myself”

Having recently binged ‘And Just Like That’, a spinoff of the 90s hit show ‘Sex And The City’, I feel like Carrie Bradshaw writing this blogpost. So, let me begin by borrowing Carrie’s iconic phrase. I couldn’t help but wonder: What is it like to work at Imperial as a young, gay man?

As Export Control Support Officer in the Research Office, I help Imperial’s academics protect their research from being misused, for example, in human rights violations or weapons development. My team and I train researchers on export control regulations and help them collaborate with overseas colleagues and funders safely. I’m very proud of the contributions to national security we make together with our researchers.

END_OF_DOCUMENT_TOKEN_TO_BE_REPLACED 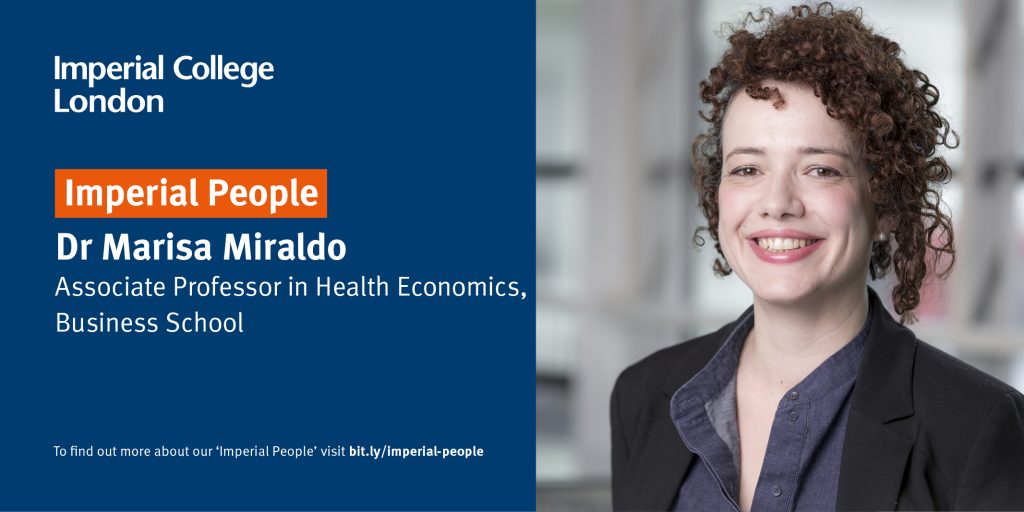 “The impact I value the most is making a difference to the lives and careers of my students.”

I am an economist by training. Early in my career I realized that I wanted to contribute to improving society and wellbeing, so I opted to focus on health economics and policy.

The core of my job is conducting research with social impact, with an emphasis on policies and interventions to promote population health at global level. My work has been featured at the World Economic Forum and has informed the development of health policies internationally, for example the introduction of a tax on sugar-sweetened beverages to curb obesity. During the pandemic I led a project that created a tool to help governments decide which patients should be seen first in hospitals given their capacity constraints. If implemented, it has the potential to save years of life globally.

END_OF_DOCUMENT_TOKEN_TO_BE_REPLACED 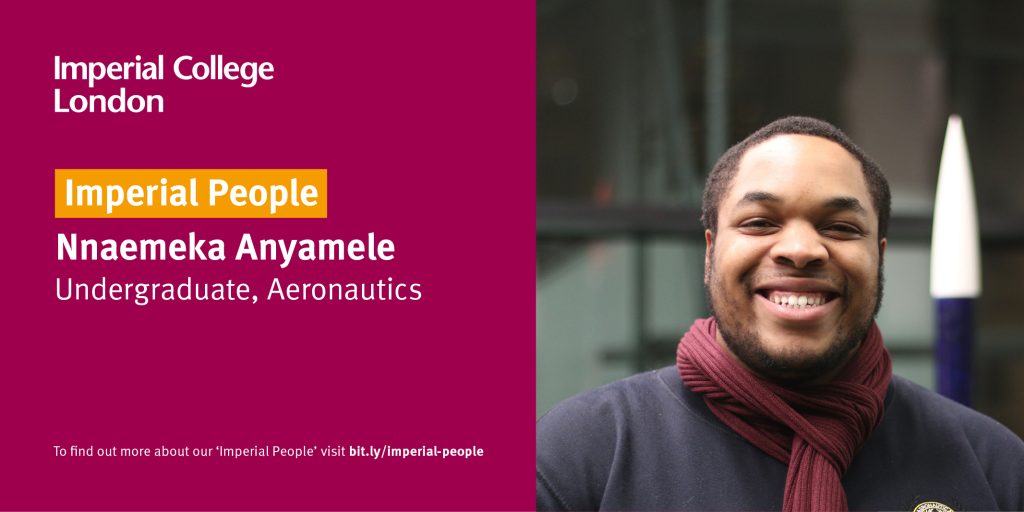