Co-authored by Luke Dubey, Dr Jasmin Cooper and Dr Semra Bakkaloglu from the Department of Chemical Engineering at Imperial College

In this short blog post, researchers at the Sustainable Gas Institute examine the literature to explore the environmental footprint and carbon credentials of blue hydrogen.

As COP26 approaches attention towards decarbonising and meeting climate targets has intensified. Hydrogen has been pitched as a solution to reducing emissions in hard to decarbonise sectors, such as heavy industry, maritime freight, and aviation but now questions have been raised over whether hydrogen could actually make it harder to meet our climate targets. In August 2021, a paper was published by researchers at Cornell University (Howarth and Jacobson, 2021) which found that blue hydrogen would emit 20% more CO2 equivalent (the metric used to measure and compare emissions from multiple greenhouse gases) than burning natural gas. The findings were widely reported in the media but there has been some backlash due to key assumptions made in the paper. The publication also coincided with the release of the UK government’s hydrogen strategy, in which there is the intention to invest heavily in blue hydrogen. It is important the UK’s blue hydrogen ambitions do not conflict with the climate change action leadership it is aiming to set during COP26.

The validity of (methane leak rate, capture rate) made in the paper have already been highlighted by experts at SINTEF in a recent blog. Our team decided to compare the paper’s assumptions with values we found in the literature (Table 1) and run a sensitivity analysis to place the results against contemporary literature. For the methane leak rate, research by Paul Balcombe and others at the Sustainable Gas Institute in 2017 found emissions from the natural gas chain to range from 0.5 to 3.5%. This compares to the higher level in the Cornell paper at 3.5%. The Oil and Gas Climate Initiative (OGCI) has also committed to a total loss rate of 0.2% by 2025, which would reduce emissions even further.

In ‘A greener gas grid: what are the options?’, Dr. Jamie Spiers (2017) looked at the efficiency of the blue hydrogen conversion process and found a range of values between 60 and 90% for steam methane reforming (SMR) process. The efficiency rate was assumed to be much lower in the paper at 55%. The capture rate of the carbon capture and storage (CCS) process also has a wider range of values from 72 to 96% for a new hydrogen plant in a IPCC report (2018) than reported in the paper. Other recent studies have also found even higher efficiencies and capture rates are expected when producing hydrogen using autothermal reforming (ATR) processes, which was not considered in the original paper.

Table 1: Assumptions made in Howarth and Jacobson paper and our current analysis

We then ran a sensitivity analysis using these literature values found as the limits of the assumptions, including the Howarth and Jacobson estimate when it fell outside the range. This allowed us to examine a fuller range of possible outcomes and more clearly compare blue hydrogen to natural gas. By assuming a uniform distribution between the literature values, we ran over 2 million combinations of these assumptions to see where the estimate in the Howarth and Jacobson paper placed against the current literature. We kept all other assumptions from the paper the same. 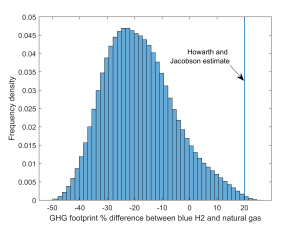 When we examine these alternative assumptions/inputs we can see that the Howarth and Jacobson estimate is on the periphery of all possible results. Demonstrating that the headline results, while possible, portray blue hydrogen in an unfairly bad light. Moreover, this is only possible as we have included the assumptions made in the paper as possible literature results. The estimate from the paper lands in the bottom 1% of all the results assessed. Therefore, while it could be argued the results are possible, they are certainly not a fair representation of the current state of knowledge.

Overall, while the Howarth and Jacobson paper raises some good points surrounding capturing the whole life cycle emissions of any alternative fuel source, it also fails to accurately represent the systems in which the energy is being used. Pushing for green hydrogen appears a sensible option at first glance, however, it may be necessary to use some blue hydrogen in the near term to enable the greater use of green hydrogen later. This is reflected in the IPCC scenarios that meet 1.5°C, with considerable quantities of blue hydrogen used in the pre-2050 period (IPCC, 2021).

As governments worldwide attempt to reach net zero, accurately representing the carbon credentials of emerging solutions is of paramount importance. It is also important to be credible with any assumptions made in any assessment of all possible solutions. Here, I feel this paper has fallen short. Yet we must still ask ourselves whether blue hydrogen, although not as bad as the paper proclaims, has a place in future energy systems, particularly in the post-2050 years. As the UK hosts, COP 26 is this investment in blue hydrogen, rather than solely green hydrogen demonstrating the leadership expected from a country such as ours.