In the first week of COP26 a ground-breaking methane pledge was announced by the US and the EU. Very quickly over 100 countries, representing 70% of the global GDP and almost 50% of anthropogenic methane emissions had signed up. The pledge agrees to cut methane emissions by at least 30% by 2030 compared to 2020 levels. It is estimated that delivering on the pledge would reduce warming by at least 0.2°C by 2050. So how is this going to be achieved, will it work, and why are over half of the emissions not covered?

Each country that has signed the pledge can decide how to reduce its emissions. This could be through new technology, regulations, switching fuels or changing practices. Due to the completely different emission profiles of each country, emissions reductions will take a completely different form. For example, the EU is a large consumer of gas, but a low producer compared to the US which has very high gas production. The strategies in place for one country will be very different to another. Due to how recently the pledge was announced, most countries do not have a detailed outline of how they plan to reduce their emissions. But these will be required very rapidly as 8 years is a short time for such a large emission reductions.

Thus far, only the US has a detailed national action plan on how to cut emissions within their borders. The US action plan was published in November 2021 following the announcement of the pledge at COP26 by President Joe Biden, and outlined their strategy to cut emissions. The action plan has considerable focus on the oil and gas sector, aiming to reduce emissions from sources covered by the action plan by 75%. This includes pipelines which will be covered by a new leak detection and repair rule which would establish standards to detect and eliminate leaks. Plugging wells, reducing flaring and venting and improving standards for new and existing oil and gas sources are also included. The action plan, should it be successful, will provide a playbook for reducing oil and gas sector emissions. Other emission sources are also covered in the action plan. For landfill emissions, a reduction in emissions via regulations and a drive to reduce the quantity of food in landfills, with the goal of 70% of emission captured from landfill. The agriculture sector is tackled via new technologies such as anaerobic methane digestors. The action plan has shown the 30% reduction can be achieved by slashing emissions from the lowest hanging fruit, in the USA’s case oil and gas and landfills, while providing jobs. This will allow the harder to abate sectors to survive while the technology to reduce their emissions becomes less expensive and more feasible to implement. 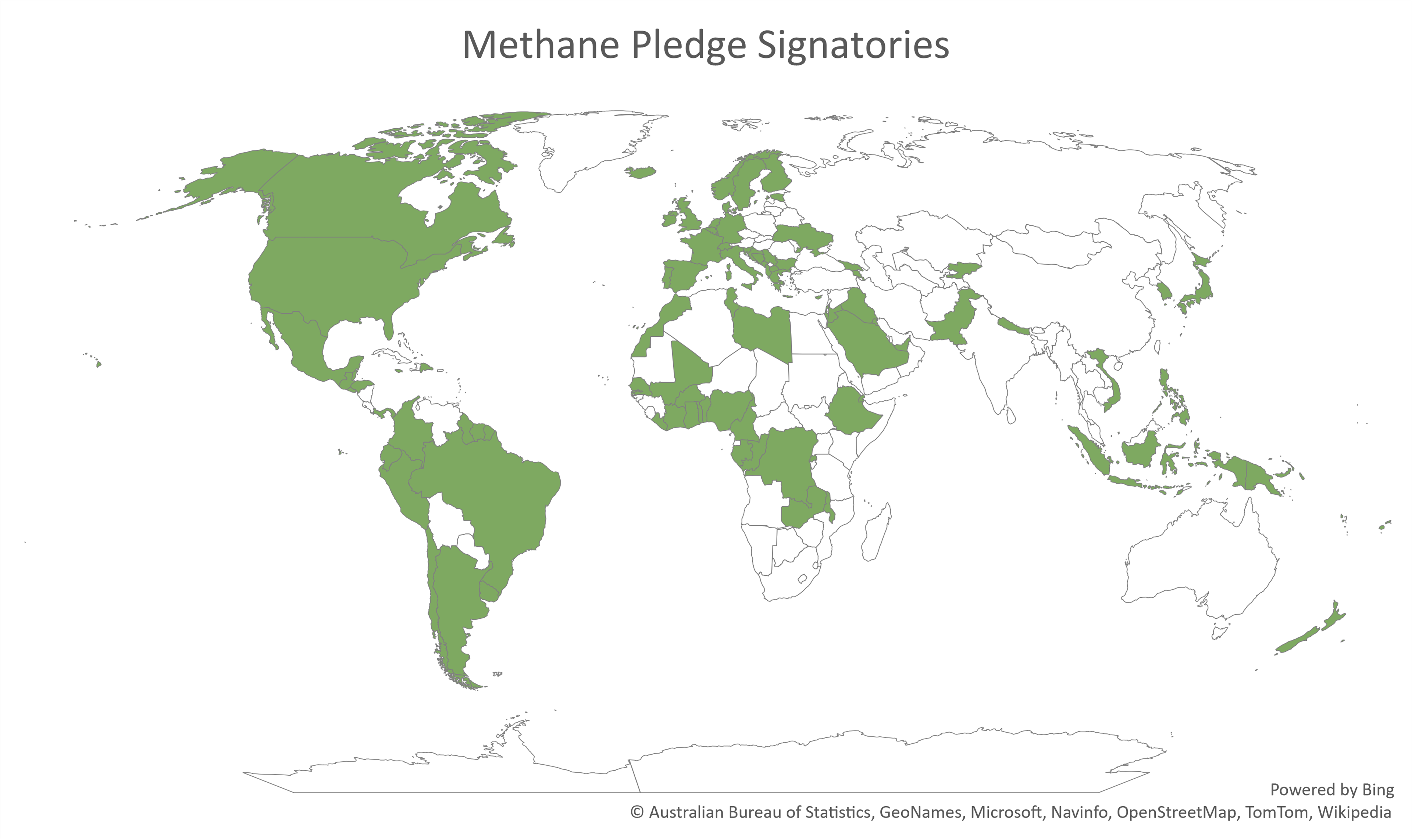 If the US has shown (in theory) how drastic emission reduction can be achieved, while also providing co-benefits to the economy, why have all countries not signed up? This is the main failing of the pledge. The 30% emission reduction, while significant enough to aid us on the path to 1.5°C (if all countries signed up) was a reduction too big for some of the world’s largest emitters such as China, Russia and India. Their omission is a huge blow to the 1.5°C target where methane emissions need to decrease by 25 – 53% for it to be achieved. Moreover, the 30% reduction in many countries is not enough to meet the IEA’s net zero pathway which sees a 75% methane reduction in energy use. So, it would seem that the pledge, by not being adopted by some of the largest emitters, will not be enough to meet Paris goals. However, should the signatories demonstrate that emissions can be reduced, while implementing a methane tax price (some in the US have suggested $1800/ton) then these countries, through purely economics may be persuaded to reduce emissions. Getting these high emitting countries onboard will be key to the long-term success of the pledge and will have a large impact in whether climate goals can be met.

Overall, the methane pledge must be seen as a positive as it is the first large scale attempt at tackling this potent greenhouse gas globally. The omission of many large emitters is a great loss but must be placed in the context of many unwilling participants at COP26. Should the reductions in emissions from the signatories be successful it will pave the way for other countries to join. This in turn will go a great way in meeting climate goals.