This article was written by a Ph.D. student Rasmus Bramstoft from the Technical University of Denmark who is currently on a placement at the Sustainable Gas Institute with the MUSE team. For his PhD , Rasmus is exploring the role of gas in future renewable-based energy systems in Denmark as part of the FutureGas project using a combination of global and regional energy systems models.

We are currently at an energy crossroad; climate change is happening now and will continue rapidly if we do not act. Globally, nations are joining forces to take action, and the Paris Agreement aims to limit the raise of the global temperature to well below 2⁰C or even 1.5⁰C compared to the pre-industrial temperature. The energy system is currently a major contributor to global greenhouse gas (GHG) emissions. Countries have therefore set their own national energy and climate targets and visions. The Nordic countries, including Denmark, are a pioneer in implementing renewable energy sources (RES).

In Denmark, gas accounts for 16% of the national energy consumption. Denmark has large, but limited reserves, of natural gas in the North Sea. However, national gas production is undergoing a transition from centralised fossil fuel based production to decentralised energy production based on renewable energy sources. This transition is happening now, and a record was set last summer, where in July 2018, 18.6% biomethane was injected in the gas grid compared to the natural gas consumption in Denmark.

Exploring the role of gas in future energy systems

To investigate the role of gas in future energy systems, you really have to understand the complete energy chain from production, via transportation and storage, to the end-consumer. This is what we are doing with the FutureGas Project, which is a project evaluating the role of gas by combining various disciplines from technical aspects to policy barriers and energy systems modelling.

Energy system modelling is a discipline, which can provide valuable insights into future energy trends. Models are developed using different approaches (e.g. bottom-up vs. top-down, or optimisation vs simulation), assumptions (e.g. different scenarios) and covering different sectors (e.g. power, district heat, gas, and transport) with diverse geographical and temporal resolution. The purpose behind these differences is that each model can answer a specific research question. 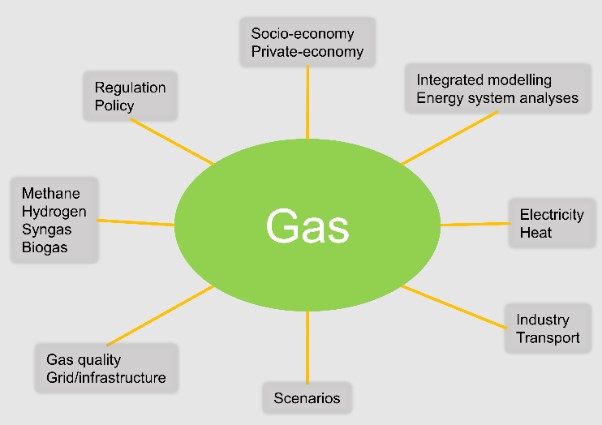 How to model gas in future energy systems

The energy system is incredibly complex, and therefore models need to take into account these complexities. For example, gas can be used in various sectors (power, heating, industry, residential, and transport). Moreover, large energy quantities can be stored in underground gas storages. It is, therefore, crucial to investigate the role of gas in future energy systems using a holistic energy system assessment tool, such as the Balmorel-OptiFlow model, in order to understand all energy sectors (power, heat, gas and transport fuels) and their relationship with each other.

Electricity is a key energy vector that also has to be considered, and is seen as the backbone system of the future. However, future generation from variable renewable energy sources (VRE), such as wind and solar, calls for system flexibility due to the intermittent nature of these sources, which can be provided by system integration with gas through, for example, through power to X (PtX) where power is converted (directly or in combination with other resources) into gas or fuels. 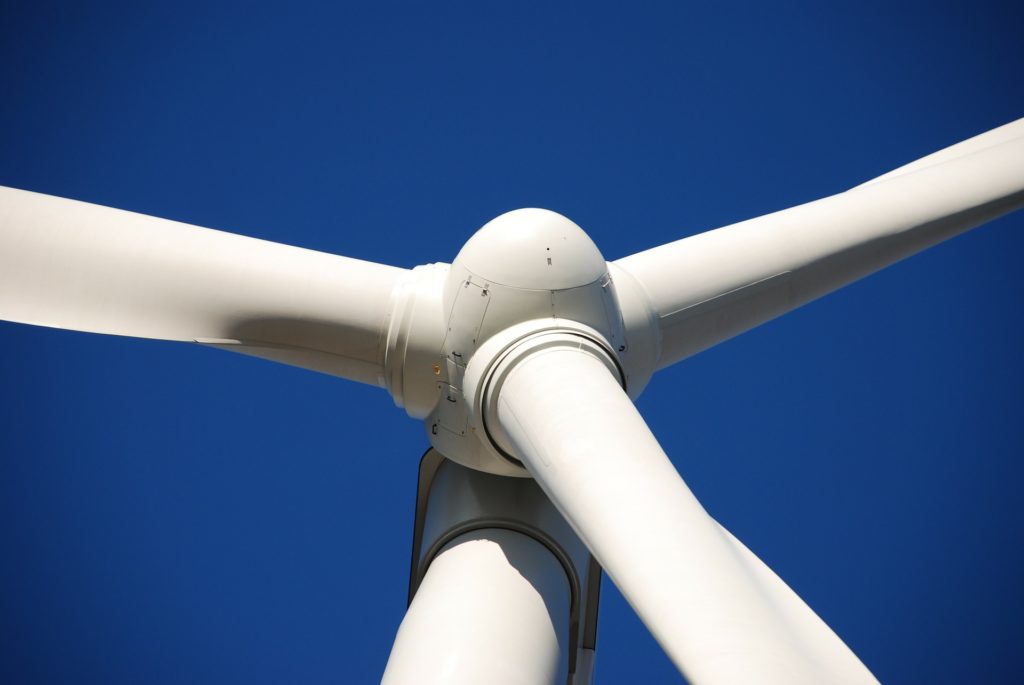 System integration also gives us another possibility, for example, technologies which produce by-products (e.g., excess heat) can be sold as heat to district heating networks and receive an additional flow of income. Examples include biorefineries, and combined heat and power plants.

Finally, the integration of cross-border infrastructures such as the power and gas transmissions systems allow energy to be balanced.

When modelling future energy systems, it is important to consider the following features:

Gas is used all over the world.

Modelling the role of gas and renewable gas at different geographical scale, for example global, regional (Northern Europe), and country (Denmark) level, is a remarkable contribution to the research field and can be used to support stakeholders and policymakers in strategic decision-making to identify promising pathways and conversion technologies.

At the moment, I’m working on developing a modelling framework where we combine the MUSE energy system model, developed by the Sustainable Gas Institute, with Balmorel-OptiFlow modelling.

In this way, the novel modelling framework combine assessments of global prices of energy carriers with detailed modelling of the chain from the transportation of primary resources to renewable gas production plants, through storage facilities and to end consumers, while taking into account the spatial and temporal energy system integration. The co-simulation leads to the socio-economic optimal system, where investments and operations optimisation is facilitated for the integrated energy system. 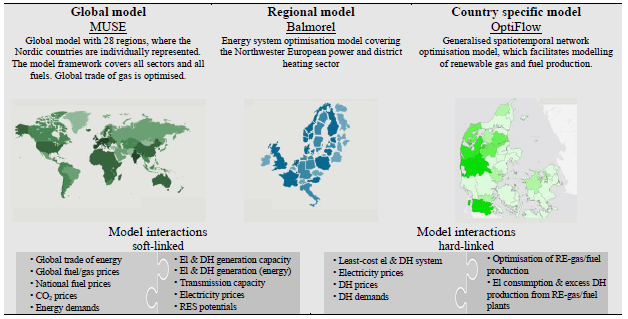