On the 19th June 2001 Sir Richard Sykes, then Rector of Imperial College, launched the first e-MasterClass with a broadcast to distinguished guests from government and other institutions in Britain, Australia and Thailand. The launch was preceded with the statement “Topical debate between masters at the cutting edge of scientific research and peer group scientists and industrialists around the world will be launched next month in what is believed to be the first e-MasterClass of its kind”. This first 40-minute presentation about healthcare policy was chaired by Chris Toumazou and was held in the video conferencing suite, which at the time was located next to the TV Studio on the level 2 walkway. 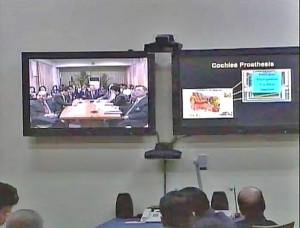 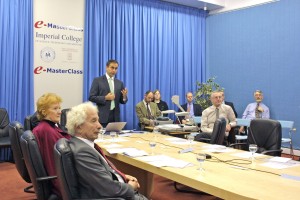 The technology used to link the various locations was Video Conferencing using ISDN2. The equipment allowed the ‘multipointing’ of the three sites into a split screen which meant that participants could all see and hear other with very little time delay. Images were viewed on 50 inch Plasma screens, something back then that was both new and expensive.

Press release information following the second e-MasterClass announced “Professor Ara Darzi impressed participants at the University of New South Wales, Australia, with a presentation entitled Look no hands — an exploration in cybersurgery which encapsulated his team’s dynamic new approach to micro-surgery and robotics and set out his vision for the future of surgery”.

The e-MasterClass, as originally intended, carried on for just over a year when they turned in Schools e-MasterClass. These potentially had a wider audience and continued Imperial’s links with schools in general. On the 10 July 2002 David Phillips from Imperial and colleague Steven Bown from UCL gave “A little light relief”. Again a pre-event announcement said “A Little Light Relief”, will provide an interactive overview of the subject that will give Year 9, 10 and 11 students the opportunity to engage with scientific developments” In the recording of the event (below) you will notice that the chairman is Noel Edmonds. He owned the Video Meeting Company which supplied Imperial with the Video Conferencing equipment. As publicity, he was persuaded to take part.

These initial events were successful. But the schools were all connecting using ISDN2 which few other schools had available. It was obvious we needed to revert to using the Internet which all schools did have available. However, what no one had told us at the time was that almost none of the schools could Video Conference connect to IP addresses outside of their own grid (for security reasons). So, we started to stream events in parallel on the Web. Again, schools could not connect as they were limited to a strict list of URL’s. None of the schools were prepared to change this list and slowly over just a few years the whole e-MasterClass just stopped!

In 2001 we made a promotional video to show the potential of the original  e-MasterClass. The video is largely based on Richard Sykes presentation in June of that year. It includes shots showing what the remote end of the links were seeing. These days the technology allows people to link from their computers and this gives the possibility to link at night, but to do so from your home not from a University room. There is the obvious fact that very long distance ‘live’ teaching, such as the original e-MasterClass idea, is totally governed by TIME. A time difference between London and Sydney of 11 hours makes it very difficult to bring together people who (at 10pm at night in Sydney) would rather be at home, than watching academics talking in London. Time-Difference was one of the reasons for the downfall of the original e-MasterClass. But, what we did worked and maybe just proved a point that Imperial can do such things. I had fun with these events and the tension of things going wrong was always there. The e-MasterClass was, perhaps, a little too early in terms of the technology available at its start in 2001 and could be superseded by things like Skype available on your computer at work or home.

Note that the web/email links on the video will no longer work!