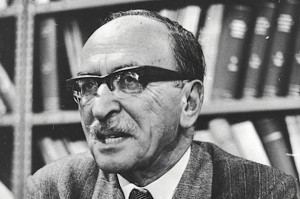 Eric Ash graduated from Imperial with a first class honours degree in electrical engineering in 1948 and received his doctorate four years later in 1952. His Ph.D. supervisor was Dennis Gabor, so he has first hand knowledge of the man and the research he was carrying out at that time. Eric Ash and Igor Aleksander have both been heads of Electrical Engineering Departments, Ash at University College London and Aleksander at Imperial College London. In this recording they discuss the work of Dennis Gabor that lead to him receiving the Nobel Prize in 1971 for his invention of Holography. I met Gabor just once, when he very briefly discussed with me his previous (unsuccessful) ideas for a flat TV tube (at the time, we were standing in the TV Studio in front of a Sony Trinitron colour TV).

This recording was made in the Imperial College TV Studio in May 2000.

Did you live in any of the college halls of residence during your time at Imperial College? If so, you may enjoy a very brief look back at some of the halls before the big changes took place across the campus.

Back in 2002 Sharine Brown (1950-2010) then Head of Accommodation Services asked us to make a promotional video for showing at Open Day of that year. This was no quick or easy project. Shooting video at all of the major halls would take a great deal of time and organisation. Our big challenge, as always, was access to rooms, student areas and students themselves in some cases. The majority of shots were best left without people in them. This was because some of them were going to be seen so briefly (as you’ll see) that the inclusion of students would have distracted from what people needed to see.

The scaffold, seen briefly in the first video, was to reflect the rebuilding/refurbishment work then underway on certain halls. This shot was removed in the second video because that work was, by then, completed, hence why you’ll notice that there are two videos, which initially look the same, but there are differences. The first is the original, made in 2002 and the other is a modified version for 2003 that had some sequences replaced, as I have already explained. In fact we had several versions and variations which included one with a scrolling caption across the bottom with various “facts” about the college and the halls. Our big mistake was not realising that the then ‘new’ Plasma screens did not like very fast moving action across the screen and simply blurred it all out! Also, as you are watching this via the web, some of our moving ‘name plates’ are suffering too. It seems almost impossible to make a video which will display perfectly well in all situations and on all platforms. The shots of London landmarks were from a previous video I’d made, so that saved an huge amount of time. The shots of Princes Gardens with the old buildings are now a valuable record of what the college once looked like.

One thing that we did do at the start in 2002 was to produce a give-away DVD of the video for those attending the open day events. You’ll also notice that the end credit shows that the Imperial College TV Studio had transformed into Media Services between the production of the two videos. That facility has transformed again and is now part of Communications. Such is the pace of change within Imperial College.

So that’s clearly a very good reason to see what we have in the video archives that shows, or relates to, both of these departments. Seen many times before we have the amazing 1960 colour film of the City and Guilds building on Exhibition Road. Shown in the film, during the demolition of the building, is the construction of the new Mechanical Engineering Department, of which we get a ‘tour’. This video is silent please note.

New to our YouTube channel is a video I have only just recently digitised. I made it in 1993 as a promotional video for Civil Engineering under the title of ‘Building your Future’. Many aspects of the department are featured and past students are seen talking about their jobs and careers outside of Imperial. You’ll also see a field trip we made to a central London construction site.

And finally a video (or more correctly film) with links to both departments. It’s the (c)1969 film ‘This week in Britain’. Those who remember Civil Engineering from that period will immediately spot where both the opening and closing sequences were shot on the main staircase. Watch out for the Civil Engineering hydraulics lab and the Mechanical Engineering workshops, plus more.