During most academic years STOIC would actively cover the ICU Elections. These became a very important part of their news events and of course included the famous live coverage of hustings and election results from the Great Hall. To assist people with finding out what was involved in these elections many different people came into the studio to talk to STOIC. Way back in January 1981 it was Liz Lindsay’s turn to be in front of the cameras. Liz was then ICU Honorary Secretary and she was chatting to Grant Richmond. 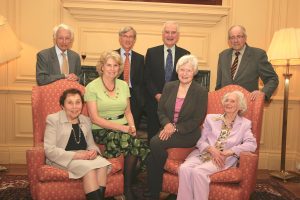 Former Rector (1985-1993) Sir Eric Ash died last year. In 2006 I recorded interviews with all living Rectors. Along with my colleague Anne Barrett from the college archives, we recorded in depth interviews to be used during the following centenary year 2007. Unfortunately, when the centenary year arrived communications used only extremely brief clips from all of the recordings. The interview with Eric Ash was around 50mins in total, but just 3mins 27secs was used. I did provide a different clip that ran 2mins 16secs when Imperial announced his passing, but now we can see the full length 47 min recording.

I have now edited together the full interview, which I recorded incidently in the old videoconferencing suite. You will hear Anne Barrett asking the questions and keeping the recording session flowing along.

In the above photo you can see all of the Rectors that we interviewed. Across the top: Sir Eric Ash, Sir Richard Sykes, Lord Ron Oxburgh and Lord Brian Flowers, along with their wives sitting below.