I was recently ploughing my way through yet more archive videotapes and discovered another piece of Imperial College history. On the 11th November 1976 we recorded an interview with the then Rector of Imperial, Sir Brian Flowers. Later he was to become Lord Flowers of Queen’s Gate.

During the interview James Sinclair, who was then the STOIC Chairman, discussed many topics, including the current building extension application for Linstead Hall, one of the accommodation buildings around Prince’s Gardens (east side) which was rejected by Westminster City Council. The extension finally happened in 1980, both the original and extension buildings have subsequently been demolished and replaced by Eastside. Brian Flowers was the most cooperative of our rectors when it came to being interviewed, either in the studio or elsewhere. I think he felt that such collaboration with the studio and other ‘media’ on the campus would pay itself back when discussions took place on student matters or affairs. He was certainly one of the most popular rectors. 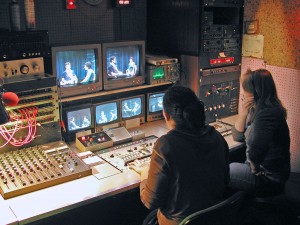 When the interview was recorded we were still operating in black and white, colour was three years away. However, the ‘new’ studio had only opened during the summer of 1976 and was once again to be modified when colour arrived in 1979. I reckon this was the first rector interview in the new studio, which for those that remember, was on level 2 of the main walkway. The photo on the right was taken in 2006.