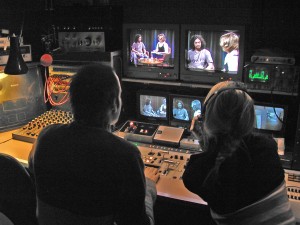 Making them was not always so easy. To capture the experiments we needed to be able to record, as much as possible, in ‘real time’. That is, record the action without stopping or having to then edit later. We needed to be able to try and capture what would have been demonstrated live in the lab. Also, when an experiment had started, it couldn’t always be stopped on a whim from me because I couldn’t get a good camera shot! So, we had to be able to record with several cameras and this meant shooting in the College TV Studio** where we had three cameras available. Shooting this way meant we could, as much as possible, run in real time; if we had rehearsed what was going to happen. So, using three cameras we were able to plan ‘blocks’ of the experiments that could be recorded before we had to stop and reset cameras etc

Chemistry in a TV Studio has its problems though. And one of THE biggest problems was with white lab coats. Our early colour cameras had a single stripe vidicon tube in them and the bright white labs coats were susceptible to almost glowing in the end result shot . The light required for good pictures was a little higher than for black & white and highlights would very easily burn out, a good example being the glassware. The three cameras also had manual adjustment for colour, so getting all three to give well balanced images, all the looking same, was a nightmare at times! Another problem was ensuring that I could see on the monitors what was required, without a hand or shoulder blocking the view. We tended to position a monitor so that the person demonstrating could see whether or not this was happening. It was easier for them to move than for the cameras to do so.

After 32 years some of the videos are starting to show their age and playback is becoming difficult. It took a few hours before I could get a stable playback I was happy with, in order to transfer them onto DVD.
If you studied Chemistry and came across these teaching videos during your course then please do let us know via the comment option below.

** Even though we are now in a “YouTube video age”, sadly in February 2007 Imperial closed the TV Studio, along with its Control Room, Editing Suite and also the Video Conferencing Service. The videotape archive remains within Communications.

As we celebrate yet another Post Graduate Ceremony (May 2013) I thought we would look back only a few years ago to 2009. This was the year that the Imperial College gained its own Mace and it was officially presented to the college during the ceremony at the Royal Albert Hall in May of that year. The mace is the generous gift the Goldsmiths’ Company, who have had a long association with the College. It was given to mark the designation of the College as a university in its own right and the award of a new charter by the Queen. The Goldsmiths’ Company commissioned Padgham and Putland of Kent to design and construct the mace. The mace weighs 7.1kg and is of silver and gilt. Its intricate workings incorporate the College crest and motto. The video is part of that May 2009 ceremony at the Royal Albert Hall, London.

Lord Kerr was still Chairman of the Governing Body at that time and he accepted the gift on behalf of Imperial College London.

Read Post Graduate Ceremony 2009 – Presentation of the Mace in full