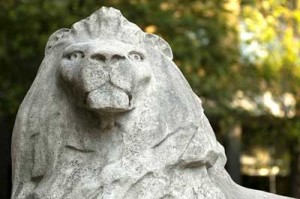 In one way or another, ever since we’ve had the use of video as a medium we have used it to promote things. You will have already seen in other posts the promotion of specific research projects or research groups and so on. But we’re going to start another series that shows how we’ve tried to promote the college as a whole. I’ll also mention that we’ll see how individual departments have tried this too, examples being: Chemistry, Civil Engineering and the Management School (now Business School), so watch out for those blog entries coming sometime soon.

To coincide with the 1985 centenary of the City and Guilds College an impressive exhibition was put on in the Junior Common Room in the Sherfield Building. Although this was primarily research work, schools were invited and special lectures and tours were held, Therefore, very large numbers of school children were going to visit the college  and there was, of course, huge possibilities for student recruitment. So, two promotional videos were (initially) commissioned to promote the college to school children and to potential postgraduates. This was also the first time that moving aerial footage was taken of both the South Kensington and Silwood campuses. The only unfortunate thing was that the footage was shot in January and we’d just had a downfall of snow, so the campuses don’t look too inviting!

The undergraduate promotion video was called “Studying for the Future” and shows all of the usual things to excite potential undergrads. Once again, the nice thing about this and the other videos, is the wonderful record of college life. Also, the campus as it then was, is recorded with the current students and staff going about their daily lives. I wonder how many alumni might actually spot themselves in some of the shots?

A second video was made at the same time. This was to show the research work and activies going on at Imperial and was entitled “Discovering the Future”. I hope you’ve spotted the trend with these titles of the videos all following a certain style with the “….the Future”? A large proportion of this second video was also seen in the video made for undergraduates. The theme used was of a ‘research file’ concept and when you see the video you’ll understand what I mean. And, can those former Blue Peter TV programme viewers spot Valerie Singleton doing the voiceover in this second video?

Next time I’ll show you a third video for those considering taking a masters degree. Can you guess what the title might be?

SORRY, SOME OLD VIDEO LINKS ARE NOT WORKING

Last time, we looked at the very start of STOIC with clips from things like: an early promotional video to join the club and Morphy Day on the tow path at Putney. Staying with that line of thought, this time we’re going to see an early example of coverage of a rag event, Election Results ‘live’ from the Great Hall and the days when students had a “Mooney” for lunch rather than an sandwich.

By the time that IC Radio was about to open, there were ways to achieve this ‘within’ a building (as opposed to an actual transmitting aerial as such). As you will hear in the interview,  a ‘leaky feeder’ cable was the method used to enable broadcasts on the medium wave. Mark Caldwell (a former STOIC Chairman) and main presenter at the time, interviewed John Allen who became IC Radio Station Manager. This video is from 4 March 1976 and has a few glitches in its playback, but it’s not bad for 35 years of age.  John Allen has his own archive website with loads of old photos and sound clips, so you may wish to hop over and read more about it, click here.

Coverage of rag events was a regular and popular item within STOIC’s programme schedule. Whether it was: a simple collection; tiddlywinks down Oxford Street or, as we’re about to see, “Guilds Silly Sports” outside Harrods in Knightsbridge. This was always a good location for all involved, as it’s about 10 minutes from the South Ken campus. So, no one had to travel too far and this was important for STOIC when a rag took place on a Wednesday afternoon – the time in the week when STOIC’s news programme was recorded and edited. So, returning with the videotape to start editing was always the main thought for those waiting back in the studio. This is one of the earliest rags recorded back in 1979. Colin Palmer interviews those taking part and more importantly, those giving money…

Hustings, elections and the UGM, (where the results were announced) were also high on the STOIC list of events to be covered each year. When, in the early 70’s, parts of the college were linked by both video and audio cables an idea came to mind. Why not try and link from the great hall and report the UGM live via STOIC? When the idea was first suggested the technology was not quite in place to allow video as well as sound to be relayed back to the TV studio.

So, in year one, Mark Caldwell presented live segments in sound only, with a photo of him showing in vision! Year two was a lot better and technology allowed a full linking in vision and sound. So, five years on from the first attempt, here’s a clip from the UGM of 1980 with Paul Johnson presenting (click red icon above).

But…this is just a bit different again. Why? Well, because by now STOIC was running its own live programme AND also linking into IC Radio at the same time. You’ll see what I mean in this clip and you’ll hear me on the earphone cue system which was clearly too loud that day! The slight pause before Dave Fuller starts speaking is because they were waiting for a cue from IC Radio to confirm the link-up between the two networks, all rather complicated for those early days.

Finally, if you were a student in the 1960’s to 1980’s you may well remember going for a “Mooney” at lunchtime. What was this? Well the answer is simple. Victor Mooney (Died on December 27th 2012 aged 89) was college Catering Manager from 1953 to his retirement in 1985. He became part of college tradition and so did his food, hence the reference “Mooney”. It’s a bit like saying you’re using a Hoover I guess. Over the years he came in for some serious complaining by the students, but, as he always said, if he was given a serious budget he could provide a serious meal. Here he is from 1979 talking to STOIC regular Dave Ghani.