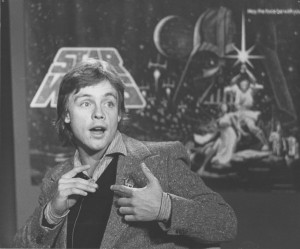 38 years ago on 15 December 1977 Mark Hamill visited Imperial College to promote the forthcoming release of a new film. That film was Star Wars. We were lucky to get him to visit the TV Studio (then in Electrical Engineering Building) as part of the publicity rounds to promote the film. I suspect we’d never get a look-in these days, but back then no one had heard of the film and they needed every drop of publicity. Coming to the studio for the STOIC interview was closely timed because we’d been informed that he was next going to the BBC TV Centre for a live appearance on Blue Peter (the Children’s TV Show). The photo on the left was taken in the studio at the time of the recording. He was talking to James Sinclair who also happened to be the STOIC chairman at the time.

The day before the Mark Hamill recording we had also managed to get Gary Kurtz who was the producer for the first film and whose name seems to have almost disappeared when the film is mentioned these days. 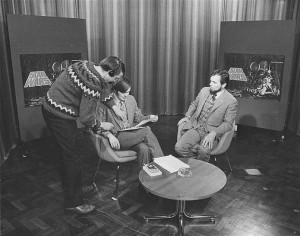 Sadly this interview is one of those programmes now frozen in time on the old Ampex A format one inch videotape which sadly we cannot now play without a machine and those are now rare. We were still a few years away from moving into colour so the Mark Hamill interview is in black and white. For copyright the film clips are removed.

We made use of  the initial studio recording right away, but it was not ‘edited’ to neatly included the films clips until a later date. When you hear the reference by James to ‘earlier this year’ he’s referring to the academic year, which starts in October.