In 1982 all the talk around campus was about the Fermentation Plant in the Bio-Chemistry building. The plant had been transferred to a private company to be called Imperial Biotechnology and employing its own members of technical staff. The plant was set up initially to satisfy the needs of Sir Ernst Chain in the 1960’s. There is excellent footage of the building and the plant in my previous blog where the Queen Mother opened the building.

This news item from the Thames Television News archive is a report from April 1982, it shows the Fermentation Plant and includes an interview with Dr Trevor Langley who was instrumental in the formation of the company.

This is an update to the original entry earlier this year. Pathe have just released all of its archive onto YouTube, so I am now able to bring you the film clip direct and in higher quality, rather than going via their own website.

In November 1965 the late Queen Elizabeth the Queen Mother visited Imperial College to officially open the newly completed Department of Biochemistry, headed by Sir Ernst Chain (1906-1979).  What you will see are the original 1965 (silent) film rushes shot by Pathe News for its weekly newsreel, shown in cinemas at that time. These newsreels ended in 1970. It is to be assumed that the final edited film (if that ever happened) would have had a commentary on it, but this is all silent. 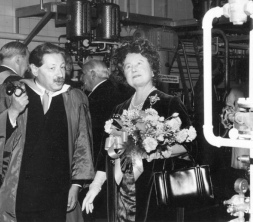 This film record by Pathe is one of the few that were shot on campus at this time. Sequences include the arrival, at the old college Exhibition Road entrance; Sir Patrick Linstead (Rector), Sir Ernst Chain and Lord Sherfield (Chairman Governing Body) all greeting the Queen Mother upon her arrival. This film would have been shot some 8 months before the sudden death of Linstead. You will also see the very obvious building work taking place across the entire campus, with a complete gap where Sherfield and the library now stand. Finally and most importantly, there are shots of Chain in his laboratory, something that we do not have in our own archives.

Were you in the crowd that day? Maybe you are one of the students lining up to speak with the Queen Mother at the end of the film? If you are, then do let us know.