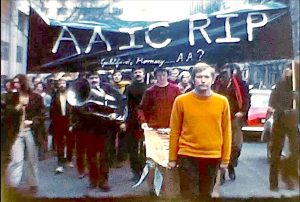 Leslie Croker came to work in the Chemistry Department of Imperial College in 1926 as a lab boy. In 1949 he was made a Laboratory Superintendent for the Physical and Inorganic chemical laboratories and later in 1956 for the entire Department of Chemistry.

He was greatly involved in the training of technicians at Imperial College (and in London in general) and talks about this in the video.

It was made to showcase just some of the then current research taking place at Imperial. I seem to recall that Eric Ash was about to go on an overseas trip to several countries, including India and that this was made to accompany his presentations. You’ll notice the emphasis on past Imperial Nobel Prize winners at the start of the video and a rather slow list of Imperial’s Fellows of the Royal Society towards the end.

Several areas of research from around the college were featured. Two Nobel Prize winners included were the late Lord George Porter (1920-2002) and the late Sir Geoffrey Wilkinson (1921-1996), both are seen working in their respective labs. Bob Schroter (featured in a previous blog) talks about his work with Camels; Steve Ley, formerly from Chemistry, discusses pest control, whilst Howard Thomas from St Mary’s talks about Hepatitis Vaccine.

Towards the end, we featured some of the first ‘vox pops’ in one of our videos, where current students talk about their experiences and views of being at Imperial College. You will see the first aerial footage of Imperial used at the start of the video.  This was provided to us by the (then) University of London Audio Visual Centre and was shot by them as part of a 16mm film they made for Channel Four Television. The video concludes with the former Rector himself, Sir Eric Ash, speaking direct to the audience with his views on where Imperial is today and what his vision is for Imperial tomorrow. This was shot in the old Rectors office up in the Sherfield Building.

Making them was not always so easy. To capture the experiments we needed to be able to record, as much as possible, in ‘real time’. That is, record the action without stopping or having to then edit later. We needed to be able to try and capture what would have been demonstrated live in the lab. Also, when an experiment had started, it couldn’t always be stopped on a whim from me because I couldn’t get a good camera shot! So, we had to be able to record with several cameras and this meant shooting in the College TV Studio** where we had three cameras available. Shooting this way meant we could, as much as possible, run in real time; if we had rehearsed what was going to happen. So, using three cameras we were able to plan ‘blocks’ of the experiments that could be recorded before we had to stop and reset cameras etc. END_OF_DOCUMENT_TOKEN_TO_BE_REPLACED

This was intended to promote all aspects of what the department did and to assist in the recruitment of new students. I also recall it being shown at Open Days which seemed obvious . Two members of the staff were appointed as ‘producers’ so most of the content and the wording of the voiceovers was decided for me. Looking back at the video over 30 years later it has too much in it. The history section seems unnecessary and there’s too much detail in the various elements featured. It runs for nearly 20 mins which is about two thirds too long in todays modern YouTube video world. Leave them wanting more is the theory, not wanting to leave the room as soon as the video has eventually finished! This was one of two videos made for the department, the second being made four years later in July 1985. It’s worth noting that both of these videos were made using our original colour camera. It needed massive amounts of light (as mentioned in the Library video) and suffered ‘smearing’ on highlights, the colour itself was none too brilliant either!

The second video was also far too long but did, thank goodness, have Professor Sir Geoffrey Wilkinson in it. He appeared because he was then head of department. Being a Nobel Prize winner it was considered important and prestigious to feature him. I said thank goodness because it has given us the only interview recorded with him whilst at Imperial, an archive gem. Like the first video in 1981 I had little control over the content. It seemed that almost everything including the kitchen sink appeared in the video. I truly ‘cringe’ when I watch it, especially the Kensington Gardens sequence! One of the few times I managed to get my way was on the intro sequence. I used so called ‘production music’ rather than music created by a family member as in the first video. The video does use, for the first time, electronic effects. The multi-picture sequence later on and during the opening where the image slides down were all very new at the time. Now, these are common place and all achievable on a computerised edit suite, but we had a dedicated box to do it that cost thousands of pounds.

On an historical note, the first person you see talking is located in a lovely garden area…that’s where the ‘blue box’ Faculty Building is now standing! You’ll also see Princes Gardens, as it then was, in the summer of 1985. Between 1981 and 1993 I made around 10 teaching videos that were used on various ‘lab days’ to show the students how do undertake the experiments they had to do. It was considered more effective to show one correct version of an experiment, rather than several slightly different versions by several different people based around the labs. I’ll try and get some of these on line soon. Maybe you had to do one of these experiments whilst at Imperial?

Also, if you are featured in any of these videos do let us know. The two still photos were by my former colleague Neville Miles, who like me, helped to capture some of the history of Imperial College in the many photographs he took over the years.