On 2 December 1980 I assisted STOIC with the recording of an interview with Lord Flowers (1924-2010) who was Rector from 1973 to 1985. This was the first time that we had recorded the Rector in colour and at that time STOIC did not have their own colour equipment, hence I helped out. This was an interview that former STOIC Chairman Mike Prosser carried out and at the end Mike asked if he’d record this separate special message. I’ve only just found this recording, included in the Christmas edition of their News-Break programme. The Rector’s office in the Sherfield Building is long since gone, as it moved into the new Faculty Building once it was opened. So yet another record in the archives of Imperial’s ‘times-past’.

On 13 January 1982 edition of STOIC’s News-Break, Mike Hackett visited the City and Guilds office. Andy Rushton was then the president of C&G and he spoke about what was coming up and happening during the term. He also spoke about the forthcoming C&G elections. Some information I managed to find about Andy tells me that since 2011, he has been a Principal Consultant at ESR Technology providing major hazard services onshore and offshore. He also has involvement with the Institution of Chemical Engineers.

Once again this video was not without its technical problems and challenges. The studio sequences are all more or less OK, because they used high quality cameras. However, the camera that STOIC used for location work was nowhere near such quality and used what was called a single striped colour tube. The combination of being a tube camera and it producing the final colour by this method, was never without its problems. 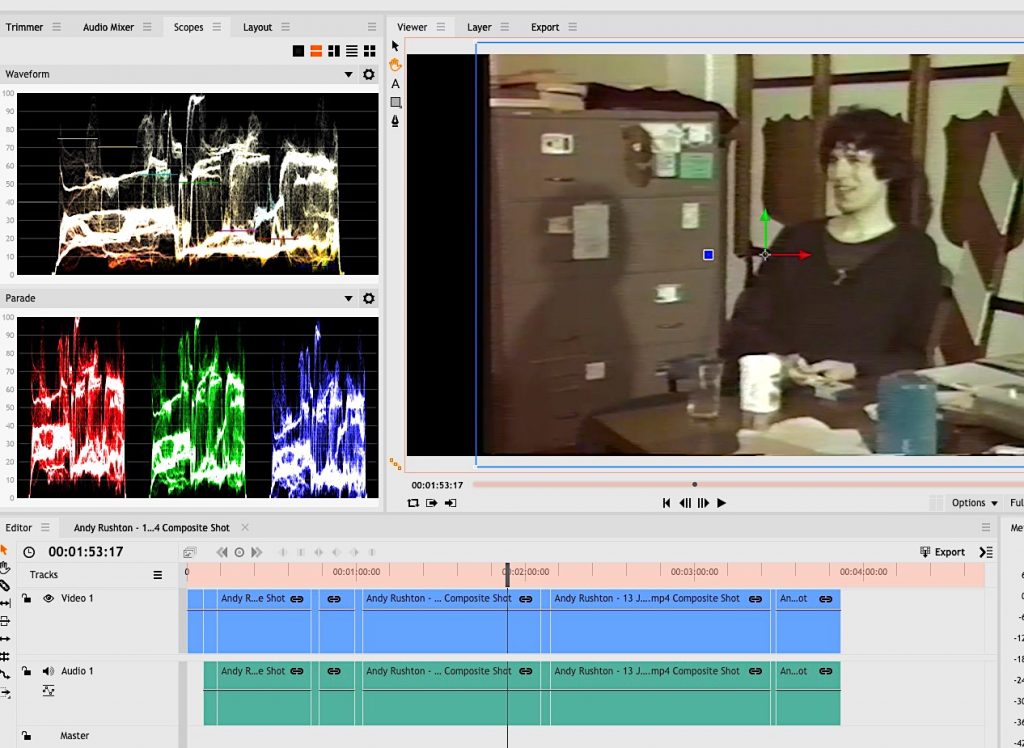 The colour balance on the original was way-off and at the time, in 1982, we had no way of correcting this in post production. The still (above) that I’ve grabbed, is what it looked like directly from the programme master-tape during correction. I’ve struggled to produce something less green but have had to settle with what you are about to see. If the colour isn’t there, you can’t produce it out of thin air!

Today we have yet another untold story from Imperial’s past with an idea that started at the college and ended up on worldwide TV. Way back in 1975 Mark Caldwell, then Chairman of STOIC started an ambitious series of interviews with both film stars and TV celebrities. The first included American film director and actor Mel Brooks, British actor Malcolm McDowell and Australia’s very own Dame Edna Everage, otherwise known as Barry Humphries. The series ended up being called Film Talk. Coinciding with this were the services provided by the ULAVC, over the ILEA Channel 7 cable TV network – which I have covered previously.

I was the TV contact at Imperial and knew both the staff at the ULAVC centre in Bedford Square and the ILEA TV Centre in Battersea. Somehow or another I mentioned the idea of them showing some of these programmes over their network. The idea was accepted, so future recordings were made with both local viewing and remote viewing via ILEA in mind. We had progressed so well that a contact at Imperial College introduced us to yet another new idea. In Mechanical Engineering there was a computer-aided design system called CADMAC. It used a mini computer, storage-tube system and plotter as its basis for the generation of ‘animation’. For normal film animation at the time, cells made of plastic film were drawn on and filmed frame-by-frame by a normal film camera. The concept was to use the computer output to produce either cells or to output onto paper. These would then be captured onto film as usual. The difference here was the computing. Things could be manipulated on the screen by using a lightpen and objects merged and moved around. This could (at that time) not be run in full-motion playback, so it was therefore outputted onto film or paper.

A company was formed called Video Animation (later called Electronic Arts) and they were looking for ideas to showcase the possibilities of this new technology. We met them and they offered to make a short animation based on three photos that we would provide. These were inputted to their system by using a light-pen system to trace the image. It was then animated to produce an end result. 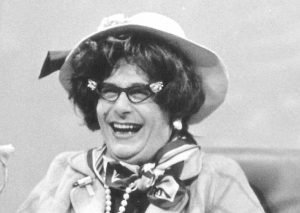 So, the images were Mel Brooks, Malcolm McDowell and Barry Humphries as Dame Edna. The end result is not perfect. They could not, for some reason, cope with Dame Edna’s glasses or hat, and these are missing from the animation (see actual photo on left). It’s a very heavy contrast line drawing with no grey scale, but for us it was at least unique. They also created and added the title. The final product was given to us on 16mm film, the sound was added later. 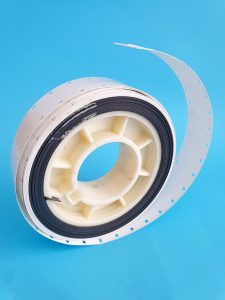 The film (seen on the right) was then played into any of the programmes via tele-cine. If we happened to be recording at the ILEA Battersea Studios, they had a tele-cine unit within the control room. For anyone who remembers the opening sequence to the worldwide TV series “The New Avengers” it was Video Animation who produced the opening title animation. It’s no coincidence that the Avengers TV series started the very next year in 1976. So, the experiment for Film Talk could well have been used to persuade the TV company to use animation in the opening titles. Our animation has some very close similarities to that of the New Avengers opening titles. See the bottom video for the Avengers animation sequence.