The Centenary of the foundation of the College was celebrated on 9 July 2007 with a ceremony in the presence of Her Majesty The Queen and His Royal Highness The Duke of Edinburgh. The Queen and Duke also opened the College’s new Institute of Biomedical Engineering before taking part in an honorary graduation ceremony that saw the first ever Imperial degrees awarded to five distinguished figures, including His Royal Highness The Duke of Edinburgh.

The ceremony followed the bestowal of a Royal Charter by Her Majesty The Queen that declares the College an independent university in its own right after its withdrawal from the University of London.

The visit cemented a long-standing relationship between the UK’s Royal Family and Imperial. The College stands on land purchased with the profits of Prince Albert’s Great Exhibition of 1851 in fulfilment of his vision for a centre of science and culture in South Kensington.

The event was recorded for posterity and at the same time relayed live via web links to all parts of Imperial College, whether on the South Kensington Campus or not. Three cameras covered the ceremony from different angles and I mixed the event live at the time. What you see here is the full unedited live coverage version and please note that unlike BBC broadcasts of such events, there is no added commentary. The ceremony took place in the College’s main entrance hall with special staging having been built for the occasion. Rector at the time was Sir Richard Sykes. The recording runs for just over 30 minutes.

24 years ago in December 1988 Imperial College held the first event aimed at children to introduce them to science. The event was Christmas Caper and departments and sections throughout Imperial College came together to create a ‘wonderland’ of science for the kids. Not all the things were specifically science, face-painting being one of them. It was held during the afternoon and staff were encouraged to bring their own children along. It took place in what was the lower refectory in Sherfield Building. The event was masterminded by Claire Ash, the then Rectors wife.

In December 2010 former student Sir Brian May revisited Imperial College London as part of a BBC documentary programme retracing the early life of members of the group Queen. The documentary was called ‘Queen – Days of Our Lives‘ and was aired on BBC2 in May 2011. Brian May was Knighted in the New Years Honours list for 2023. 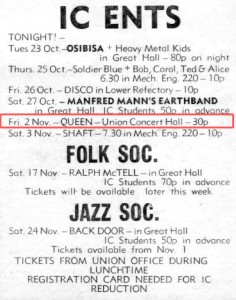 There does not appear to be much in the college about his time as a student, but I did find an interesting early reference to his involvement with Queen in the Felix archive. See the top of page 6 for a review of their album “Queen II” and note the reference: “…it is very unlikely that they’ll ever need to have connections with their previous vocations again.”
In the same article it referred to Queen’s Imperial concert in the previous term and I have found the advert for that event. I think 30p was reasonable admission to see what would become a World famous group!!! 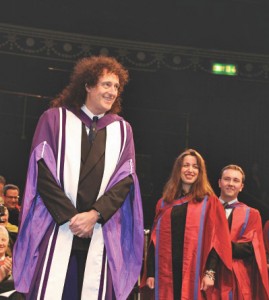 Only recently I remembered that I had a copy of an old 45rpm disc. It was called IC for sale Vol 2.

It was given to me by Richard Woodhead (one of our students) around about 1972 so that’s over 40 years ago now. What I had forgotten was that it contained some unique sounds of Imperial College. It has great recordings of the three college unions C&G, RSM and RCS chants plus the Imperial chant Hey Vivo which I can’t recall the last time I heard it. The 45rpm disc -or any tape recording of it- do not exist in the main Imperial College Archive, so I’ll be putting a CD of it in there soon. I have found a review and reference to the original first pressing of the disc in the searchable newspaper PDF archive of FELIX May 1965. See page two at the top called ‘Gateway to Industry’.

Also, if you know Imperial from far enough back you will remember the City and Guilds building clock and bells (photo on the left). Or if not, you will know that the clock mechanism relocated to the Mechanical Engineering Building foyer (photo at bottom) some time after the original buildings were starting to be pulled down in the late 1950’s.

The bells were moved (photo on the right) way up on top of the building overlooking, what was, the green Dalby Court area. This is now where the Faculty Building is located. The bells would ring the quarters, half and so on and could be heard throughout most of the college area. I gather that regular mechanical & electrical  problems caused the demise of the chimes! But, these can once again be heard on the disc. END_OF_DOCUMENT_TOKEN_TO_BE_REPLACED