For this second blog we’re going to look at an inventor, innovator and communicator of science on TV and in the classroom. Eric Laithwaite (1921-1997) came to Imperial College in 1964 as Professor of Heavy Electrical Engineering.  His specialist work was on Linear Induction Motors. Prior to his arrival at Imperial, he had appeared on TV many times, so he was no novice to the whole process of making both TV programmes and, as was the case with ICI’s Millbank Films, science learning materials for schools. He made a whole series of films for ICI such as “Motors Big and Small”; “Shaping things to come” and “The Circle of Magnetism”.

How do I know all this you may ask? Well, I’m biased because for a short period of time I worked with him and was present during the recordings of the 1966 Christmas lectures at the Royal Institution. If anyone still has his book from the series “The Engineer in Wonderland” you’ll see me in a photo on page 155.

By the time of the 1974 series “Engineer through the looking-glass” I had moved on to do video production. So I was surprised to receive a visit from Eric Laithwaite in the early summer of 1974. He wanted to chat about ideas for talking backwards. Programme number 3 was to be “Jam yesterday and jam tomorrow” and he wanted to see what we could come up with for the reversing of time and speech.

I must have come up with a good idea because when he heard what I’d done with “Merry Christmas and a Happy New Year” (backwards of course) he said “Right I’d like you to present that during the lecture”.  My credit in his book of the series says “…Colin appeared ‘officially’ in the second lecture taking over part of the lecture in effect”.  Because of media interest in the advanced publicity for the 1974 series both myself and Eric Laithwaite were interviewed on BBC Radio about the speaking backwards idea. It was only recently that I had the opportunity to get hold of a DVD copy of the original videotape still held in the BBC archives. The quality is still amazingly good too.

Armed with all of this background knowledge, in 1980 I recorded an archival interview (link above) with him in his lab office in Electrical Engineering. Part of this interview was used in a special IEEE memorial lecture given by his colleague Barry Owen.

Eric Laithwaite’s work continued with linear motors of all types. The ‘Magnetic River” was a short video (link above) I shot for him in March 1984. It features his now familiar model of a levitated and propelled train by means of magnetic induction and was the very last video I made with him. A few years earlier this same linear motor had appeared in the James Bond film “The Spy who loved me”. It was another of “Q’s” gadgets that was demonstrated to Bond. I just happened to be going to Pinewood Studios and took the demo film to Eon Productions for them to decide whether  to use it or not in the production. They did use it and Eric Laithwaite’s technician Cliff Johnson was seen operating the Magnetic River in the actual Bond film. Buy the DVD of the film to see what I mean.

As well as its uses for tracked transport the ‘Mag River’ had other potential. In this 1980 example (link above) its use as a metal sorter, sorting out aluminium from other scrap materials, is being demonstrated. Materials were painted various colours to show what was being separated.

A video I shot with Eric Laithwaite in May 1983 (link above) was a demo for an American film company who were considering making the “Silver Surfer”. The idea was to levitate someone on a huge aluminium sheet. As you’ll see from this video, it was a rather daunting task and as far as I recall, never happened. All the humming is coming from the huge electromagnetic field coming from the coils.

His research in later years into Gyroscopes was, and still is, a topic of much discussion within the scientific community. Here, he demonstrates the principles of a gyro using a rather large and heavy wheel (link above). It’s spun up to speed with a normal household drill! We recorded this video in our TV Studio in May 1983  and needless to say, I stayed well back from both him and the wheel! It was always ‘fun’ working with Eric Laithwaite and I recall him sliding off a chair in the studio as he laughed so much when we tried speaking backwards into a taperecorder. He once said to me that when a job is no longer fun, it’s not worth continuing with it. The last time that I spoke with Eric Laithwaite was when he was telling me about the concept of a linear motor launcher for NASA rockets/vehicles, I never saw his again… 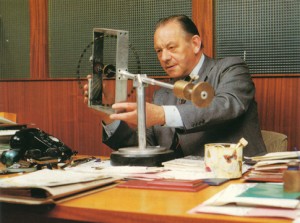 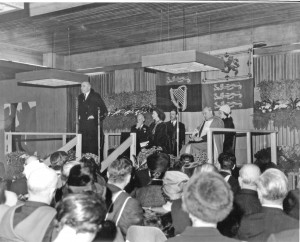 SORRY, THESE OLD VIDEO LINKS ARE NOT WORKING