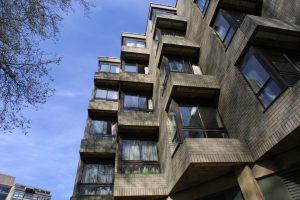 41 years ago in 1978 the big question of the day was will the Linstead Hall extension in Princes Gardens be built, because finances were not going as planned ? As you will see from the video, this question was being asked in both Felix the student newspaper and on STOIC during its weekly news programme Lunch Break.

We are indeed lucky that during the current digitising of batches of STOIC videos, I’ve found two items related to this topic. The first from 1978 has an on site report from James Miller and then an interview, in the TV Studio, with James Sinclair talking to Hugh Barrett, the then Student Union President. Lastly and amazingly, we have another on site report by Mike Prosser after the project was actually completed and the building finally opened.