City and Guilds College in 1960

You may be aware that a renaming of Mechanical Engineering has just taken place. The new 1960’s building, located on Exhibition Road, has just been renamed The City and Guilds Building. 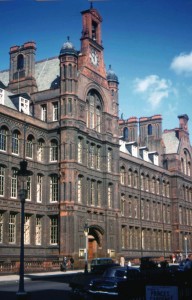 Pre 1960 Alumni will recall the original building, the foundation stone of which was laid in 1881. Previous blogs about City and Guilds recalls the history and includes a brief section of a 16mm colour film made in 1960. Here, I am showing for the first time the full unedited version. It’s silent and was intended to show the ‘old and new’ developments as the original building was slowly pulled down and the new building created behind it (hence the setback of the Mechanical Engineering Building from the roadway).

The film also shows the only record we have of Sir Owen Saunders (then Dean of City and Guilds 1955-1964 and also acting Rector 1966-1967). This is a unique piece of Imperial College history and the only film we have of the old buildings. The fact that it’s in colour is a added bonus.

Read City and Guilds College in 1960 in full

Back in 2010 I brought you the two videos that were made to coincide with the City and Guilds centenary in 1985, they were Studying for the Future and Discovering the Future. I had promised to bring you a third video made later in that year called Mastering the Future. Obviously, this video was intended to showcase and promote the idea of taking a masters degree at Imperial College.

Key figures from Industry were featured to give a sense of what was required from University students taking such masters degrees. One person appearing was Sir George Porter, later Lord Porter who was then President of the Royal Institution. Later he moved to Imperial College to continue his research work. By the time the video was made Eric Ash had become Rector, superseding Brian Flowers. One of the few recordings that we have of Professor Bruce Sayers, then head of computing and also dean of City and Guilds is part of this video. Once more there are some great views of ‘Imperial past’ featured such as: the original front entrance on Exhibition Road; Sports Centre and Gym; Libraries and the 1960’s Walkway with Bookshop.

The oldest videotape recording of one of our rectors of Imperial College is that of Lord Penney (1909-1991). Rector of the college from 1967 to 1973 he took the post over from Sir Owen Saunders who was acting rector from 1966 to 1967 after the death of Sir Patrick Linstead in 1966. Recorded in 1971 for showing to students via the fledgling Student Television of Imperial College (STOIC). I can’t remember whether or not this was part of one of the trial news programmes called IC Newsreel, or perhaps designed as as stand-alone programme, I think maybe the latter is more likely. 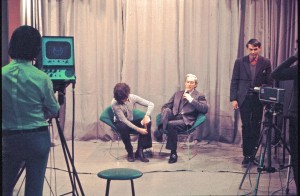 Our studio, if you could have called it that, was rather basic and sparse.  As you’ll see in the video we had no background of any type at that time. The rare colour photo shows a slight improvement in 1974 when we managed to get some grey curtains! As this was well before the advent of the ‘tie-clip’ microphone, we used what were called neck-mics. A microphone on a thin cord that went around the neck and were very common at that time for PA system use. They did however provided much better sound than trying to use mics on stands or similar.

A former student of Imperial College, Lord Penney initially worked on the Manhattan Project during WW2 and was a flight observer of the dropping of the bomb on Nagasaki. Penney was asked in 1947 to head the team that ultimately produced Britain’s first nuclear test and in 1957 this was successfully carried out off of the Australian coast.  He touches very briefly upon this during the interview, even though he was reluctant to discuss it in any great detail (he doesn’t actually mention the British nuclear test). You can watch the TV programme Equinox which includes an interview with Lady Penney. The interviewer for our video was Dave Willis, who I know very little about, other than he was a computer science postgrad student, but I don’t recall the years that he was at Imperial.

This is a newly restored version of the video that was shot originally on Ampex one-inch tape format. I’ve managed to clean, and brighten up, the image to a certain degree, but it is 42 years old. The original master tape now resides in the Imperial College Archives. On the link to the film of Operation Hurricane you’ll see Penney (on board a boat)  turning around and using Binoculars to see the resulting explosion.