There were three organisations collaborating in this European SPRINT project, Imperial College in the UK, AIN in Spain, and
DTI in Denmark. SPRINT was the European commission’s Strategic PRogramme for INnovation and Technology. 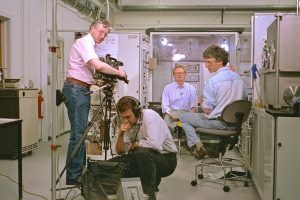 This July 1994 video was an introduction to surface treatment of metal tools by the use of Ion Implantation. This technique modifies the tool
surface, improving the wear, corrosion resistance, and frictional properties. The project disseminated knowledge and
applications of Ion Implantation as an effective surface treatment and was targeted mainly at European Small-to-Medium
Enterprises, to improve their productivity and competitiveness in the world market.

It was made in three language versions which were produced for the three SPRINT partners by the Imperial College TV Studio and a fourth version in French, made for I.B.S.  As well as the UK, we went to Denmark and Spain to record the relevant sections of the video. The photo above was taken at DTI in Denmark, you can see me operating camera along with my Imperial academic colleague Tom Tate sitting on the chair on the far right hand side. The video’s voice-over was by Michael Rodd.