In previous posts I have mentioned the Royal Institution Christmas Lectures given by Professor Eric Laithwaite in December 1974.

I was involved with one of those lectures ‘Jam Tomorrow and Jam Yesterday’ which was lecture 3 in the series. During the late summer of that year Eric Laithwaite had approached me to discuss various ideas to do with things going backwards. He particularly wanted to play around with the idea of speaking backwards. These days you can very easily do such things on your computer let alone on a phone. I managed to find within our Electrical Engineering Department an audio/instrumentation recorder that was able to run backwards. 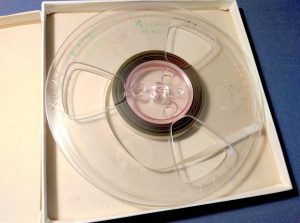 I asked Eric Laithwaite to call into the TV Studio so that I could demonstrate this to him. I recall us both playing around with speaking, or trying to speak, ‘backwards’ and then playing the actual tape backwards to see if it came out ‘forwards’. At one point he almost slid of the chair in hysterics at what sounds were coming out of the loudspeaker, some of which sounded very rude! He was sold on these ideas and I said that I would play around some more and make extra investigations. What I then decided to do was to create a tape with a sentence rather than just single words. It took ages to do and I had to cheat by editing a string of words together to create something special for the lecture. Over on the right is the original tape that was used in the lecture and now looking slightly aged. 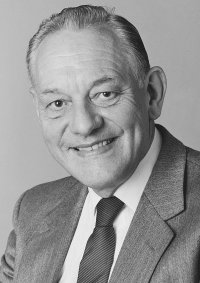 When Eric Laithwaite heard my sentence he roared with laughter and said ‘right, I want YOU to present that in the lecture’. And so I was therefore seen presenting my achievement and also helping him during various sound recording experiments with members of the RI audience. I recall the first recording with the young boy who immediately turned his back on the cameras to face the tape recorder. The BBC floormanager then started to make furious gestures to me to get him to turn slightly so that the cameras could see him.

Five years later in his 1980 book, to go with the series, he gave me a most wonderful credit. “…Colin appeared ‘officially’ in the third lecture taking over part of the lecture in effect…”

And so, 43 years later, here I am speaking backwards at the Royal Institution.