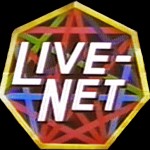 In 1985 a proposal to install an experimental cable TV network between some of the schools of the University of London came to fruition. British Telecom had pioneered the use of fibre optics with the installation of Westminster Cable Television in London. The fibre cables linked to central street boxes that then fed into homes on coaxial cables (Switched Star Cable TV system). This enables users to select what they wanted and the resulting signal was then sent back to the street cabinet and then to the home.

Moving this technology one step further on, BT proposed a system where the fibre came direct to a cabinet located at some of the Universities in London (UCL, Imperial, Kings, QMW, RHBNC and the ULAVC at Senate House). The resulting system was called Live-Net and consisted of a bundle of fibres providing 4 in and 4 out channels at near broadcast quality.  It had been decided to locate the central switch for the whole system at the University of London’s Audio Visual Centre located at Senate House. This would also act as an additional transmission point for establishments around that area, for example Birkbeck College.

The installation required the actual pulling of a cable containing these fibres through ducting in London streets to the various locations. I recall the day that the cable was brought into Imperial and then through building ‘risers’ up to the TV Studio which was then located in Electrical Engineering on Level 2. A rack then contained all of the electronics which linked to these cables. The initial major job for BT was the termination of these cables to provide a connection to the optical hub. We were aware that the central switch was already in operation and the link to the Audio Visual Centre established. Imperial was to be the first connection after this to coincide with the upcoming University of London “Science for Industry” Exhibition to be opened by Princess Anne, Chancellor of the University of London on 13th October 1986. If the Imperial link could not be established then the showing of Live-Net at that Exhibition would not take place. The short video extract below is all that remains of the first moving images sent through the fibre network a few months before the exhibition. Moments after the BT engineer terminated the fibre cable, images came through from Central London. Ray Bradley was then Chief Engineer at the Audio Visual Centre located at Senate House. In the video (seen here for the first time), he takes a phone call from me to confirm establishment of the connection by BT. We had no sound at first so we reverted to using the phone! 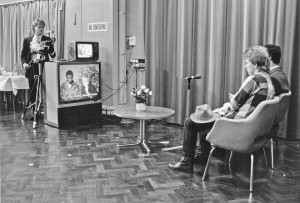 The installation was indeed completed and the first public showing of the system took place during the University of London’s Science for Industry exhibition held at Imperial College between 13th-17th October. During that week the TV Studio relayed images from the Live-Net system into the Junior Common Room where screens were setup to display the channels available. Princess Anne saw Live-Net for the first time on 13 October 1986. The video below has never been seen before and I have edited it into a sequence for this blog. I also shot footage of the exhibition and I’ll include that in another entry soon. 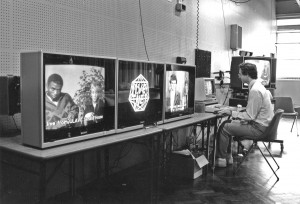 Participants were welcomed into the TV Studio to link and talk to remote locations within the University of London. The photo shows two things, firstly on the left the incoming image from the ULAVC at Senate House, (the Studio image is over on the right) and secondly I am sitting at a terminal connected to the central switch. I was able to switch the signals going to the exhibition and also ‘to and from’ Imperial in general – all of this using a BBC Micro Computer too! 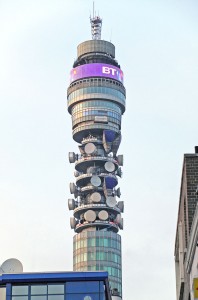 There was another event to launch Live-Net that I’ve just remembered. This time BT gathered all of those connected with the project together and did it in style. We all met at the top of the BT Tower in London in, what was, the revolving restaurant. And I have this feeing at the back of my mind that this was the signing of the documents between the University of London and BT. If that was the case, then all of that preceded the installation of the actual equipment and cabling, but I simply can’t remember now! I don’t recall any photos being taken either, which is a shame.

In the second and final part we’ll look at the royal opening and a special visit by another member of the royal family!