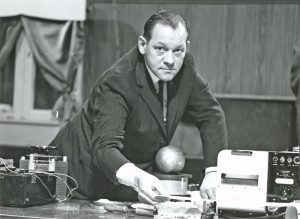 In 1999 the BBC had a TV series called Local Heroes. It was presented by Adam Hart-Davis and featured various people who had made significant contributions to science etc. One programme featured Prof Eric Laithwaite. Filming took place in Eric Laithwaite’s original lab in Electrical Engineering. They needed various extras, so not surprisingly they contacted me. I provided the portrait photo (taken by my colleague Neville Miles); as well as giving them access to some film clips, and also pointing them towards other BBC materials that I knew about. One clip that I mentioned to them was the Noel Edmonds ‘Multi-Coloured Swap Shop’ clip. Having been involved with the 1974 RI Christmas Lectures I also made sure that they knew about those too. Not a bad piece, except they got his title incorrect. It should have been Professor of Heavy ELECTRICAL Engineering, they left electrical out!

The opening sequence is before the college main entrance changed completely, so that’s a flashback for those who remember it the way it once was.