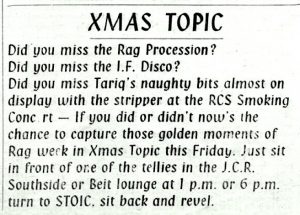 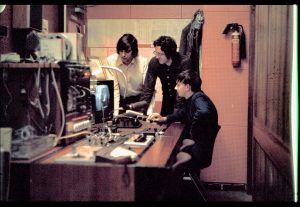 In October 2008 the then Prime Minister Gordon Brown paid a visit to the Imperial College Business School. We were there to cover the event along with a crew from Number 10 and also ITV News. 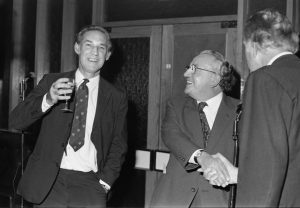 In a presentation that he made, he commented that he already had a connection with Imperial College because a relative had been a Professor here. Indeed he was more than just a Professor, he was a Head of Department. In fact his Uncle was Professor John Brown, Head of Electrical Engineering for 21 years and my head of department when the TV Studio was within Electrical Engineering. On the left hand side of this rare photo is John Brown seen during the retirement reception for Departmental Superintendent, John Ganley, in around 1976.

And there is even more of Gordon Brown’s relative on video. Cast your mind back to the blog about STOIC’s first news programme, IC Newsreel in 1970, where he made an appearance giving an obituary for Lord Willis Jackson.