Back in 2016 I posted some stock footage of the South Kensington Campus that I had shot in 1992. Here’s an updated version of that with footage shot 21 years ago in 1998. The quality will be better because it was originated on broadcast quality Betacam tape. You will see some nice views of Princes Gardens with both of the original Southside and Linstead Halls. Maybe you might even see yourself in the JCR or on the original Exhibition Road entrance and walkway? I’ve added some captions to remind you of the names of certain places along with any new names that might have come about since 1998, an example being Dalby Court.

I hope this might bring back some memories for those who were at Imperial during this time period.

From the Arithmometer to Electronic Arithmetic – 1998

On the 29th January 1998 a series of presentations and talks were given during the Chapman/Whitehead memorial meeting. One of these presentations was given by Anne Barrett from the Imperial College Archives. Her presentation was “From the Arithmometer to Electronic Artihmetic – The History until 1955.

Anne also mentions the construction, by college members in the 1950’s, of the Imperial College Computing Engine the ICCE 1.

Read From the Arithmometer to Electronic Arithmetic – 1998 in full

Mathematics at Imperial since 1956

This presentation was recorded on 29 January 1998 at the Chapman/Whitehead Memorial Meeting. Alfred Whitehead (1861-1947) and Sydney Chapman (1888-1970) were both former heads of the Mathematics Department during the 1920’s.

The presentation is by Walter Hayman (1926-2020) and consists of personal recollections and memories. Hayman joined the college in 1956 and was appointed to a chair of Pure Mathematics. He retired in the 1980’s and is now an Emeritus Professor in the department.

Read Mathematics at Imperial since 1956 in full

After some effort, the final batch of videos we made in conjunction with the London Mathematical Society (LMS) have now gone live on the Imperial YouTube channel. 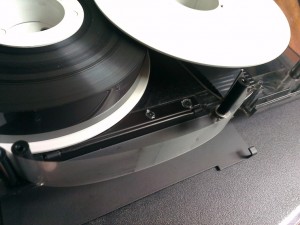 The final 6 videos now concludes the upload of all of the remaining LMS lectures in our video archive. The previous blog about the LMS videos explains all the details of how and why we recorded them, so going there will fill in all the gaps. As usual, it was the same old problem and story of oxide and goo shedding from the U-matic videotapes. I explained all of this in the blog about beating the goo, but it involves taking the cassettes apart (seen on the left with just the spools of tape showing) and heat treating them. Needless to say, this is a time consuming process taking at least a day before you can find out whether or not the tape will playback well enough to digitise. If not, then you start the process all over again! So a good few weeks went by before I could end the upload process.

Mathematics Videos with the LMS

In the entry “Promotion: 2 – Mathematics” I made reference to the videos I had made in conjunction with the London Mathematical Society (LMS). These came about for two reasons. Firstly we had made the departmental promotional video, as seen in that previous blog.

This was not a huge success and we needed an alternative way to promote the department. The second reason  was that a member of the Maths Department was connected with the LMS, who ran their Popular Lectures at Imperial College each year. He asked if I could record these lectures when they were taking place. As most people who know me will know, I am never very keen on the ‘live’ recording of lectures or presentations. This is because I would have no control over them and couldn’t start or stop the event to get the best version for the recording. After all, if you are going to watch a video of a lecture, you want to see it at its best AND be presented to YOU, not a group of people you can’t see or interact with. If you have ever watched the Royal Institution Christmas Lectures then you may appreciate the great control the TV broadcasters have over its content and tight scripting. Any mistakes or problems are taken care of at the time of the lecture and if needs be everything is stopped. END_OF_DOCUMENT_TOKEN_TO_BE_REPLACED

Read Mathematics Videos with the LMS in full

This is the first year of the Video Archive Blog (it started in December 2009), so, as we’re nearly in 2011 I thought we’d reach back 30 years to see what was going on at that time. In 1980 non-broadcast video was still considered a new and exciting thing and we’d just moved into colour operation too. Maybe it was the whole idea of creating your own colour TV programme (which you could do if you had the right equipment) that encouraged people? So, in 1981 I was asked by the Department of Mathematics to think of ways to promote the department. It was decided an approach should be taken to discuss Mathematics in general rather than the department alone.

Lynda White, then Admissions Tutor in Maths, lead the decisions over who should appear and what they might say. She also appears at the start of the video standing outside the maths department on Queens Gate – as can be seen in this promotional photo taken at the time. Also, you’ll hear her asking some of the questions to her academic colleagues during the video. I was interested to see that we referred to everyone, except Lynda White, as just Dr or Professor and never used their first names on the captions. These days it now seems strangely formal. The only time that students are actually seen is during the opening sequence and I also spot some shots taken from the 1979 promotional video for the Lyon Playfair Library (that will be a separate blog entry where you can see the whole video). Worth noting too is that in those early days the video camera was separate from the recorder, which can be seen on the pavement. Camcorders came much later on.

Here then is the video we made. Looking more than a little dated now after 30 years and I think I’d be asleep by now if I had to sit and watch it all the way through! I can’t believe we actually had a list of courses and options being read out as part of the video. We seemed to spend a lot of time not really talking about Imperial. We did have discussions again along similar lines of promo videos but decided that a different approach should be adopted. We did this by creating a series of some 20 videos in conjunction with the maths department and the London Mathematical Society (more on these coming soon, along with all the videos we made -some 18 of them-going online).