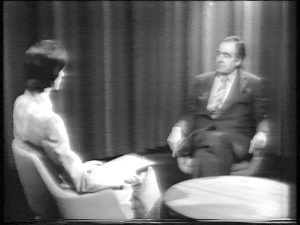 October is the time of the year when clubs and societies have stalls and events to entice new students to join them. All around the country universities are seeing the same thing happen during freshers week and Imperial is no different.

Luckily, we have a brief record of some of what was happening, because STOIC reported on the fair for the their news programme NEWSBREAK. It looked like a fine sunny day, which for October is a blessing. Grant Richmond, ace reporter, ventured to both the Union Quad and Queens Tower Lawn to speak to some of the freshers. Mike Prosser is heard on the introduction, which shows things like abseiling down the union building! Incidentally, Grant now lives in far north Queensland, Australia. And, were YOU one of those interviewed in this video?

This video is from the digitisation of the STOIC videotape archives, which I’m currently undertaking.

An update, that you will also see below in the comments, is from Bill Durodie. He tells me that the person being interviewed, at the one minute mark, is Phil Greenstreet who was in RCS, he now lives in the USA. I hope he might be able to see this video from when he was a student at Imperial! Thanks Bill.